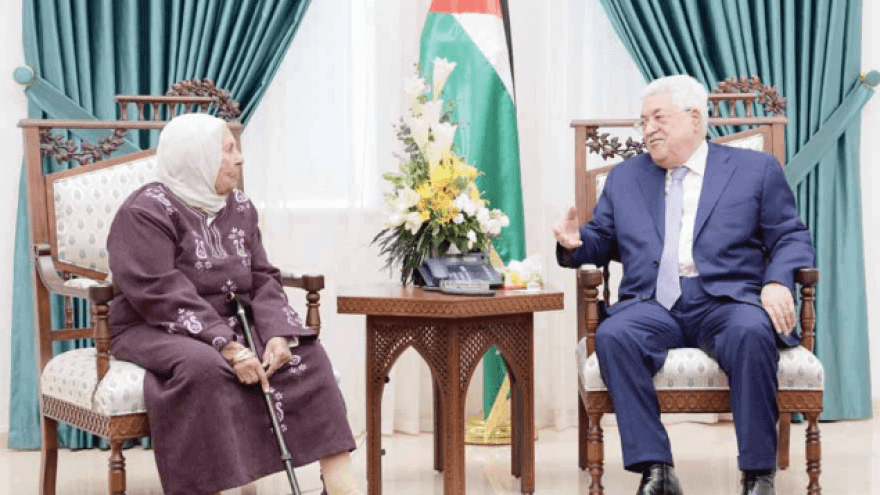 Karim Younes is an Israeli Arab terrorist imprisoned in Israel for kidnapping and murdering Israeli soldier Avraham Bromberg in 1980 together with his cousin Maher Younes. Younes was sentenced to life in prison, but his sentence was reduced to 40 years in 2012.

Mahmoud Abbas just had Younes’ family over for coffee.

Fatima Barnawi is a Palestinian female terrorist who placed a bomb in a cinema in Jerusalem in 1967. The bomb failed to explode. Barnawi was sentenced to life imprisonment but was released in 1977, and was expelled to Egypt. Senior PLO leader Qadri Abu Bakr just had coffee with Barnawi in Cairo.

Abbas has made no secret of his adoration for both these terrorists. In 2015, Abbas honored Fatima Barnawi with the Military Star of Honor, and in May 2017 he appointed murderer Karim Younes to the Fatah Central Committee.

Now both terrorists have been honored again by PA leaders.

At the meeting with murderer Younes’ family, Abbas reiterated that “the prisoners’ issue is a priority of the Palestinian leadership.” Palestinian Media Watch has documented that Abbas has stressed this numerous times and stated that even if the PA has “only one penny left it will only be spent on the families of the Martyrs and the prisoners.” Abbas stressed this again last month:

Abbas: “I say this to everyone – the salaries of our Martyrs, prisoners, and wounded are a red line. They [Israel] try by all means, and exert pressure by all means, and they continue to exert pressure: “It cannot be that you will pay.” And they’ll even deduct our money that’s in their hands. They’ll deduct from it the amount that we pay to the Martyrs. We have said that this is a red line and we will not allow [it]. From 1965 until now, this matter is sacred to us. The Martyrs and their families are sacred, [and so are] the wounded and the prisoners. We must pay all of them. If one penny remains in our hands it is for them and not for the living.” [Official PA TV, Oct. 28, 2018].

He expressed his “appreciation for her great sacrifice throughout her activity in the struggle as she never hesitated to do everything she could for the homeland.” Abu Bakr said he is “proud of Barnawi and of all of the Palestinian female prisoners… whose acts of heroism had a central role in strengthening the unrelenting resolve for more than seven decades.”