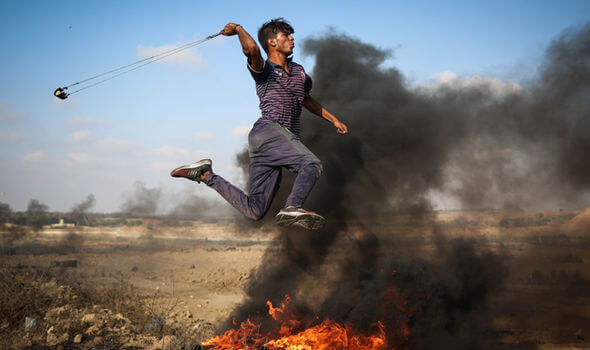 U.K. Regional Spokesman, visiting Khan al-Ahmar, announces, in fluent Arabic: “We are working to stop the evacuation. Regavim: Netanyahu is allowing the British to behave as if the Mandate never ended.”

Edwin Samuel, British Foreign Office Spokesperson in the Middle East and North Africa (MENA), recently visited the illegal Arab outpost known as Khan al-Ahmar, where he declared that the British government “is conducting a campaign to save this village.”

Samuel, who speaks fluent Arabic, periodically releases video clips in which he expresses positions that are unmistakably and undeniably anti-Israel. In the clip recorded at Khan al-Ahmar, Samuel says: “We are here in Khan al-Ahmar, a village in the West Bank on occupied Palestinian land. Behind me are the tents of Bedouin who have lived here for a very long time, now threatened with demolition and displacement at the hands of the Israeli government.”

Samuel added that “the British government is waging a campaign to save this village; both the British Prime Minister and Foreign Minister have expressed their opposition to the demolition.”

In September 2018 Israel’s High Court of Justice rejected the fifth petition submitted by the residents of Khan al-Ahmar, ruling that there are no legal obstacles standing in the way of implementation of court’s June 2018 decision.

On Jan, 1, former Defense Minister Avigdor Lieberman toured Khan al-Ahmar, and noted that the Defense Ministry had completed all the necessary preparations for relocation of the residents of Khan al-Ahmar “on the night between Oct. 20-21, 2018. On the day before the operation was scheduled to take place, I received a letter from the Prime Minister instructing me to delay the evacuation of Khan al-Ahmar. The next morning, Oct. 21, the Cabinet was convened, and voted to delay the evacuation by a few weeks, but no later than the end of 2018.”

Regavim, which has been at the forefront of the legal battle to evacuate Khan al-Ahmar since 2009, draws a clear connection between the senior British diplomat’s statement and Netanyahu’s decision to indefinitely suspend implementation of the Supreme Court’s decision: “More than two months have passed since Netanyahu’s decision not to act on the court’s ruling; taken alongside the arrogant and condescending statement of the diplomatic representative of the British government, which is acting to undermine the decisions of the government of Israel, it becomes clear that Israeli Prime Minister Netanyahu is allowing the British to act as though the Mandate is still in force,” says Meir Deutsch, director general of Regavim.

Naomi Kahn is director of the International Division of Regavim, a research-based think tank and lobbying group dedicated to preserving Israel’s resources and sovereignty.