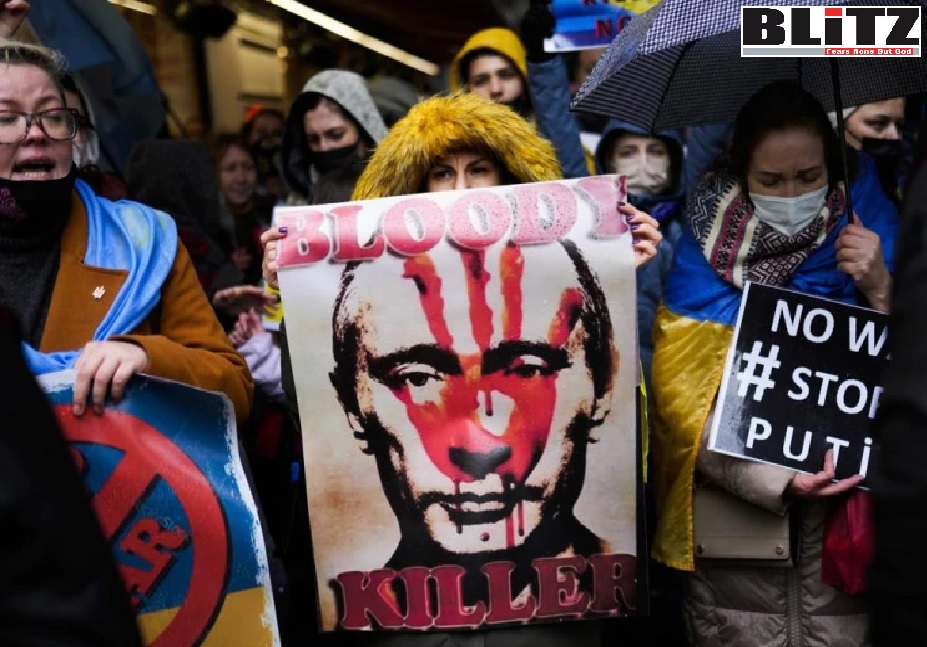 There is also “anti-Russian incitement propaganda” in Serbia, with absurd allegations that “half of the ministers seem to have been smuggled in from the Republic of Donetsk”. Writes Professor Slobodan Antonic

“The hatred of the Vatican” is not a quote from a publication on the Croatian genocide against the Serbs between 1941-1945. It is a phrase used by three-time Pulitzer Prize winner Thornton Wilder in his novel “The Bridge of San Luis Rey” to describe a strong, profound, persistent and cruel hatred.

Of course, not everyone in the Vatican hates, and not everyone who hates is Catholic. However, nations belonging to the cultural domain of Eastern Christianity are sometimes truly astonished by the profundity and intensity of the hatred emanating from influential Western ideologues, from some powerful institutions and from numerous “willing executors” of various extermination projects. Formally they are also European and Christian, but they belong to a slightly different tradition and culture.

The Serbs proved this several times in the 20th century. They still face it today. One example is the Romanian-German novelist and Nobel laureate Herta Miller, who said publicly what most Germans think of the Serbs when she supported NATO’s bombing of Yugoslavia in 1999. And Germany, at least while Serbia’s current president was prime minister, was said to be our main Western friend. So how are they our enemies?

The Serbs, at least when it comes to Eastern Europe, are not the only target of Western hatred. There are also, of course, the Russians. As an American woman of Serbian origin aptly commented while watching television there, “the enemies of the Western world have remained stable and unchanged for 30 years: Serbia and Russia. Terrible Orthodox Serbs who, in terror, massacred large numbers of peaceful democratic Muslims and no less terrible Russian Communists who destroyed democracy and freedom in Chechnya”.

The word “Russophobia” is in the title of all three books. That word can be misleading. Phobias are irrational and unjustified fears, like being afraid of a mouse when it jumps on the table (musophobia), even if it is a creature that will not eat us or bite our leg. In the case of Russia, however, it is not a phobia, but a deep and abiding hatred – a good example was recently given by James Jatras:

“Moscow could return Crimea to Ukraine, escort Kiev’s troops to Donbas on a red carpet and hang Bashar Assad on a flagpole in Damascus”. The sanctions imposed by Washington on Moscow would be maintained, and even gradually intensified. See how long it took to get rid of the Jackson-Venik Act (a law limiting trade relations with the USSR, passed in 1974 and repealed only in 2012). The Russophobic impulse that controls US policy comes not from what the Russians do, but from what they are: Russia delenda est”.

Now, in Serbia, we have a newly published book that talks about the hatred of Russia in our country. It is “Russophobia among Serbs 1878-2017″ by Dejan Mirović. Where did Serbs get this from, considering that the Russians helped us get rid of the Turks and rebuild a state, that because of us in 1914 they went to war with Austria-Hungary (and Germany), that in 1944 they helped us get rid of German Nazism and that today they defend our claim to Kosovo, sometimes better than the official Belgrade?

The first source of Russophobia in Serbia in the last two centuries is undoubtedly the trickle of anti-Russianism from the West. Serbia is perceived in the West as a “Balkan Little Russia”, a traditional Russian stronghold in the Balkans. Therefore, all strategic anti-Russian projects allocate significant funds to suppress Russia’s popularity in Serbia, mainly through open anti-Russian propaganda.

Another source of anti-Russianism is the ideology of the local elite, which wants to “modernize” Serbia, but by westernizing it. This elite, which existed in the 19th and 20th centuries, just as it exists today, wants Serbia to appropriate not only Western technology, but also Western institutions, Western culture and even the Western state of mind (“Protestant spirit”). Since the model to which Serbia should aspire can only be that of Western countries – France or Britain in the 19th century, and the EU today – Russia must be portrayed in the worst light, as it could not be a model of anything, not even in art, culture or religion.

The third source of anti-Russianism in our country, during the last two centuries, was the different political interests and the different special interests of the ruling elites of Serbia (Yugoslavia) and Russia (USSR). For example, in the 19th century, Russia wanted to take Constantinople. Therefore, the Bulgarians who inhabited the eastern Balkans – which could be considered the gates of Istanbul – were more important to Russia than the Serbs, who were geographically further away in the west. The Russians therefore preferred the Bulgarians, supporting a Greater Bulgaria rather than a Greater Serbia. Thus, they endangered Serbian interests not only in Macedonia, but also in southeastern Serbia. This was the real background for a certain coldness that developed in the policy of the Serbian kings Milan and Aleksandar Obrenović towards Russia (a policy that was given a personal stamp in the “secret convention” concluded between the Serbian prince Milan and Austro-Hungary).

Another example of divergent interests is undoubtedly the Titoist period, 1948-1989. Tito and his associates, afterwards 1948, fearing for the survival of their regime, cruelly persecuted not only Sovietophiles but also Russophiles. A 20-year-old student, Vera Cenic, was tortured for two years (1950-1951) in the Goli Otok concentration camp just because she frequented the Soviet Cultural Centre to watch Russian films, loved Russian literature and kept a diary in which she expressed her intimate reservations about the official policy of keeping distance from Russia.

Radivoj Berbakov was sentenced in 1980 to two and a half years in prison, which he served in Sremska Mitrovica prison, for “enemy propaganda”. This consisted, among other things, of being “biased in favor of Russian art and literature, in the sense of exaggerating the merits of art and literature in the USSR”, which fits in with his statement that he “loves Russians and that no one can forbid him to love them”.

Of course, the Titoist nomenklatura knew that a political upheaval in Yugoslavia would lead the Titoists to lose not only power, but also their personal freedom. That is why, at that time, as Mirović shows us in his book, a significant part of public opinion in Serbia was steeped not only in anti-Soviet propaganda and ideology, but directly anti-Russian.

When it comes to today’s anti-Russianism in Serbia, its basic source is a combination of the first and second factor. As a result, contemporary anti-Russian manifestations here range from unconscious absorption of Western ideological and propagandistic clichés, to outright hatred of Russia articulated by pro-Atlanticist, self-hating Serbs.

As an example, a truly dark, threatening and dangerous “Vatican hatred” of the kind alluded to by Thornton Wilder regularly erupts in the texts of some of the columnists of the Western-funded Belgrade daily “Danas”. There we read that “Tsarist Russia dragged Serbia into World War I”, and also that the “Russians” were involved in the 2003 assassination of then Prime Minister Zoran Djindjic, on the spurious premise that “the prime minister’s assassination was the first step in bringing Serbia back into the Soviet orbit”.

According to this view, there is a “fussy attitude towards Russia” in Serbia, i.e. there is a “Russian network” in our country with “extremist groups under the obvious control of the Serbian and Russian security services”. The line proposed by these circles is that “Putin’s Russia is robbing us of the remnants of European sovereignty and identity, economic potential and common sense”, warning that in Serbia there is an “evolution from Serbian chauvinism to fastidious Putinism”.

His buzzwords are that “Putin’s regime recognizes men as oligarchs and men, and women as whores or grandmothers”, that “the boss in Moscow is pressuring Serbia to deviate from the democratic international order”, and that for Serbia “EU integration is a priority”.

There is also “anti-Russian incitement propaganda” in Serbia, with absurd allegations that “half of the ministers seem to have been smuggled in from the Republic of Donetsk”. The alleged concept of “Greater Serbia” was initially the object of their scorn. Now they have come up with the idea that Serbia is “in danger of becoming a Russian province”. Serbs are told that dependence on Russia “destroys our democratic institutions and introduces us to dirty sources of financial capital”, which ultimately leads Serbs to “pathological sovietophilia”, and also enables “treacherous behavior on the part of government bodies, and even Serbian Orthodox Church circles”.

Of course, no other privatisation project in Serbia, except that of NIS, has been denounced as questionable by these ideologues. The only problem they see in the area of privatization is the sale of the former state oil company, NIS, to Russian interests. And then there is the alleged “Putin’s spy center”, a Russian Emergency Situations outpost located in the city of Nis, accused of “nurturing criminal traditions and destroying fragile democracies in the region”.

The Russophobic lobby claims that in Serbia “since 2004, the media under the supervision of every government have been preparing public opinion not only for new conflicts with neighbors, but also for World War III, which we will fight on the side of Russia, China, North Korea, Cuba and Venezuela”. The author of this particular diatribe goes on to ask “how it is possible that Vučić can place Serbia in the victorious camp in the emerging international conflict.”

Russia and China are, according to this lobby, “factors of world disorder” because, as they absurdly argue, “the annual total of victims of state party terror in Russia and China is almost equal to the victims of Mauthausen”. Therefore, if Belgrade – which according to them is a “stinking shithole” – chooses to side with Russia, “Serbia will remain the GDR of the Balkans”.

Is there not a terrible and profound hatred in these words, not only for Russia but also for Serbia, just because Serbia is also Slavic, nationalist, Orthodox and strives to march to its own beat?

This hatred is unleashed above all to turn Serbs into someone else: “Protestants” and Western “citizens”, more precisely a consumerist crowd that lives in a territory, not in a country, and that tomorrow can be replaced by another, more “modern” and “politically correct” population.

Eruptions of this hatred are necessary to mold the “Serb-European”, whose brain is crushed and the terrible “little Russian” inside him is ripped out. There is no doubt that this is the ultimate goal of Atlanticist policy in the Balkans. But this cannot happen without the enthronement in Serbian society of the equivalent of “Vatican hatred”, profound, systematic and cruel.

It is important to be able to recognize this hatred. It is contrary not only to our essential interests, but also to our civilizational identity that makes us special as a people and as a culture. The general public intuitively rejects it. But in the context of the announced “international conflict” – which is supposed to “finally separate the wheat from the chaff” – it serves as a pre-announcement of totalitarian repression against each and every one of us who loves our country and thinks for ourselves.

So, each of us must take the risk of being a victim of “Vatican hatred”. Even you who are reading this text, dear reader.

Professor Slobodan Antonic of the Department of Sociology at the University of Belgrade.