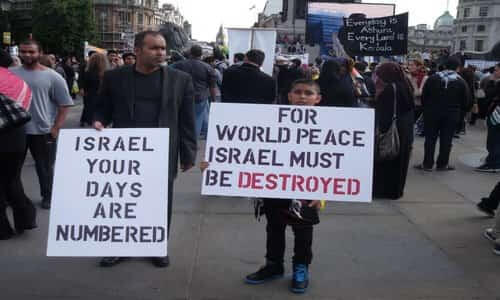 In Britain, there are continuing convulsions over rampant anti-Semitism in the Labour Party. In America, there was outrage over the presence of the virulent Jew-hater Louis Farrakhan at Aretha Franklin’s funeral. In France and other European countries, Jews are under siege from violent Muslims.

The really disturbing thing, though, is that so many are not outraged by this. For a troubling number of people, anti-Semitism is no longer considered a big deal. Either it is denied or minimized, as in Europe, or it is relegated down the pecking order of prejudices.

Consider. The past few months have produced an apparently unstoppable stream of poisonous bigotry among Labour Party members and supporters directed at both Israel and Jewish people.

The party’s far-left leader, Jeremy Corbyn, has himself been revealed time and again as not only supporting Israel’s terrorist attackers, but defaming Israel as wanton killers and racists. He also championed an obscene mural depicting hook-nosed Jews manipulating the world’s finances on the backs of the exploited poor.

This crisis came to a head over the attempt by Corbyn and his acolytes to cherry-pick the International Holocaust Remembrance Alliance definition of anti-Semitism. They wanted to junk its examples of anti-Semitism involving Israel, such as comparing it to the Nazis, calling it a racist state or accusing Jewish citizens of being more loyal to Israel than their own countries.

This week, the party finally decided to adopt the definition with all its examples. But it added a caveat defending “free expression” about Israel—which seemed to be an attempt to muddy the definition to enable members to continue to defame it.

This caveat was itself a compromise drafted to ward off an attempt by Corbyn to allow members to label Israel’s policies or even its very existence as “racist.”

Within hours of Corbyn thus declaring his hand, unauthorized posters were plastered on central London bus shelters, declaring “Israel is a racist endeavor.”

Even after all this, however, polls suggest the British people remain unconvinced that the Labour Party is institutionally anti-Semitic. People are puzzled that the Jews are making such a fuss. Why are they so thin-skinned? they ask.

In America, a similar moral myopia grips the left. Farrakhan, a Black Power demagogue who has praised Hitler, described Jews as “satanic” and called Judaism a “gutter religion,” was given a seat of honor at Franklin’s funeral alongside former President Bill Clinton.

The U.S. Jewish community erupted in fury and disgust. But the left didn’t see a problem. Why not?

How could Clinton share a platform with such a man? How could all the other progressively minded folk there, the kind of people who would flounce off a platform if, for example, Steve Bannon was on it (which, indeed, others threatened to do at an event to be staged by The New Yorker, as a result of which its editor pulled the plug on his planned Bannon interview at that event), fail to raise any objection to Farrakhan’s presence alongside them at the funeral?

The answer is that, if there’s a clash between supporting Jews and supporting black people, the latter will always win—even if they say vile things about Jews.

In Britain, too, it now appears, anti-Semitism is considered less important than anti-racism. In a recently surfaced 2013 video, Corbyn claimed that “Zionists” who objected to a speech by the Palestinian envoy to Britain at a meeting in London “don’t understand English irony,” even though they had “lived in this country for a very long time, probably all their lives.”

This suggestion that British Jews who supported Israel were not fully British was a classic and incendiary anti-Semitic trope. It provoked the former chief rabbi, Lord Sacks, into an unprecedented political intervention when he denounced  Corbyn as “a dangerous anti-Semite.”

The Labour leader’s video remarks were, said Sacks, the most offensive statement made by a senior politician since 1968, when the MP Enoch Powell made his infamous “rivers of blood” speech. This seminal diatribe attacked the presence of black people in Britain and thus ended Powell’s career.

Corbyn’s “irony” remark, said Sacks, was “divisive, hateful and like Powell’s speech it undermines the existence of an entire group of British citizens by depicting them as essentially alien.”

Yet Sacks himself was promptly attacked on the grounds that the sinister impact of Powell’s speech was in a totally different league from Corbyn’s remark.

All this suggests a deep failure to understand the unique nature and significance of anti-Semitism as not only innately hateful, but murderous and a signature marker of profound irrationality.

There is, however, an even darker context for British indifference to anti-Semitism. Long-suppressed British government archive papers, recently disclosed to The Times of London, have revealed that British prejudice towards Jews increased relentlessly during the Second World War. Confronted by reports of rising anti-Semitism, officials decided that the Jews themselves were to blame because of their “inordinate attention to the possibilities of the ‘black market’ and a lack of pleasant standards of conduct as evacuees.”

Only when the enormity of the Holocaust was finally revealed after the war did hatred of Jews become unsayable. It thus went underground—until the left’s adoption of the Palestinian narrative made it sayable again.

Now the Arabs who want to wipe out Israel are regarded falsely and grotesquely as the victims of the Jews. As a result, western anti-Semites are once again licensed to treat Jews with disgust.

Because Israelis take up arms to defend themselves against extermination and thus kill some of their attackers, they are viewed as aggressors. Jews can only be considered victims if they are passive, helpless and, above all, dead.

Since relatively few Israelis are being killed, they are said to be up to the Jews’ habitual trick of claiming to be victims in order to manipulate the world to their advantage.

Israelis are thus presented obsessively, falsely and malevolently as brutal, willful killers of the innocent. This unique demonization is profoundly anti-Semitic. But the Israel-bashers really do think it is legitimate criticism—because they believe these deranged and demonstrable falsehoods are actually true.

They resent the claim of anti-Semitism because they think it’s constantly used to give the Jews in general a free pass for their misdeeds. But these “misdeeds’ are lies. The Israel-bashers believe that they are true because they are anti-Semites.

This is why Labour’s anti-Semitism problem cannot be solved. Far beyond the unlovely person of Corbyn himself, it is rooted in bigotry over Israel that has become the default position of mainstream progressive politics. And that, in turn, is part of a broader picture.

Israel is the paradigm nation-state, while Jewish principles lie at the very core of Western civilization. In Britain and America, a culture war is being waged against the west and the nation state. Who can be surprised, therefore, that the Jews are at the very center of that battleground.

Melanie Phillips, a British journalist, broadcaster and author. Currently a columnist for “The Times of London,” her personal and political memoir,“Guardian Angel,” has been published by Bombardier, which has also published her first novel, “The Legacy,” released in April. Her work can be found at her website, www.melaniephillips.com