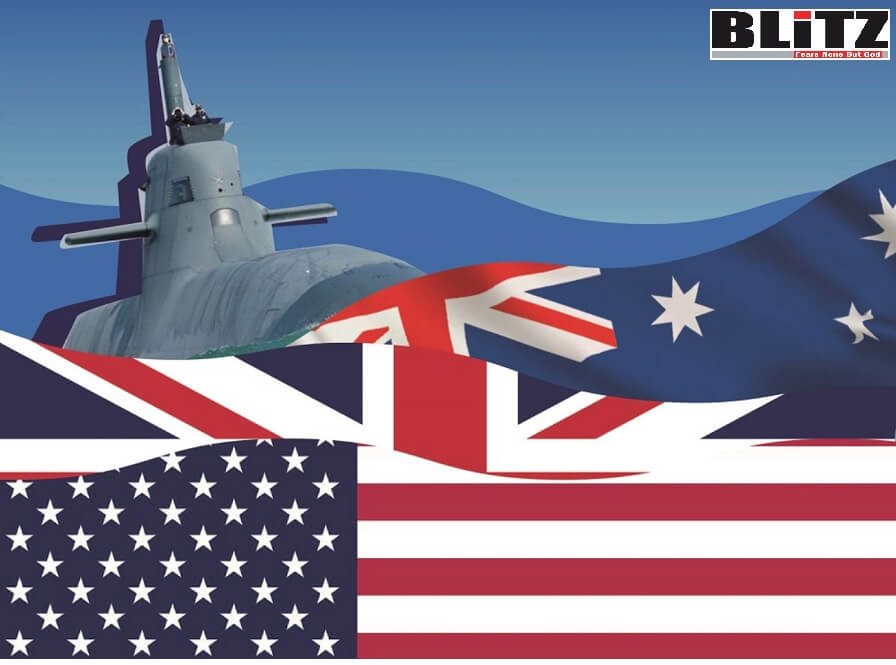 AUKUS has declared in a high-profile manner that the US and the UK will provide nuclear-powered submarines to Australia and the three countries will cooperate in developing advanced military technologies such as hypersonic weapons. By Liu Xuanzun and Liu Xin

As the US, the UK and Australia announced they would cooperate to develop hypersonic weapons under the framework of the new AUKUS alliance and the NATO leaders are set – for the first time ever – to discuss China’s influence and “coercive policies” in its next strategic concept, analysts said that the US is making use of the Ukraine crisis to speed up the coordination of NATO and the “Asian version of NATO” to serve its purpose of containing China and keep its global hegemony, which will bring greater harm to both regional and global peace, and risk a regional arms race.

US President Joe Biden, UK Prime Minister Boris Johnson and Australian Prime Minister Scott Morrison said in a joint statement on Tuesday that they were pleased with the progress of the program for nuclear-powered attack submarines for Australia, and they would cooperate in other areas including hypersonics, counter-hypersonics and electronic warfare, Reuters reported.

In response, Chinese Foreign Ministry spokesperson Zhao Lijian said at a routine press conference on Wednesday that exploiting the Ukraine crisis and using the pretext of maintaining security and stability in the Asia-Pacific, AUKUS has declared in a high-profile manner that the US and the UK will provide nuclear-powered submarines to Australia and the three countries will cooperate in developing advanced military technologies such as hypersonic weapons.

It not only increases nuclear proliferation risks and brings shocks to the international non-proliferation system, but also intensifies arms race and undermines peace and stability in the Asia-Pacific, Zhao said.

Its ultimate goal is to build a NATO replica in the Asia-Pacific to serve the US hegemony and self-interests through and through, Zhao said, urging relevant countries to abandon their Cold War mind-set and zero-sum game.

Ahead of the meetings of NATO Ministers of Foreign Affairs, which was scheduled to start on Wednesday, NATO Secretary General Jens Stoltenberg told a press conference on Tuesday that as the NATO leaders discuss developing NATO’s next Strategic Concept, they will, for the first time, take into account China’s growing influence and coercive policies on the global stage.

The US and its allies are using the Ukraine crisis as an opportunity to deepen more intimate cooperation between NATO countries and the US alliances in Asia and shift NATO’s focus to the Asia-Pacific region, Li Haidong, a professor from the China Foreign Affairs University, told the Global Times.

When the US was promoting reforms in NATO to marginalize Russia in Europe, the US and its alliance attempted to build the Asian NATO and use their advantage and strength to marginalize and contain China. The expansion of NATO will bring a shock to the world and undermine China’s and the global security environment, Li said on Wednesday.

Many recent moves indicate that the US and the UK are arming the Australian military from all fronts, not only in terms of maritime attack capabilities with the new nuclear-powered attack submarine deal, but also its long-range strike capabilities with the latest joint hypersonic weapons program, Wei Dongxu, a Beijing-based military expert, told the Global Times on Wednesday.

Just like the AUKUS nuclear-powered submarine, not much information has been released about the hypersonic weapons as of press time. These hypersonic weapons could be land-based, or they can be carried in the air or sea, enabling the Australian military to launch attacks either alone or in coordination with the US military, Wei said.

By definition, a hypersonic weapon can travel faster than Mach 5, or five times the speed of sound, and make maneuvers mid-flight to make its trajectory unpredictable and accurately hit its target. Previous ballistic missiles can exceed Mach 5 but their trajectories are usually fixed, while previous cruise missiles can change course but are not as fast.

This has led military observers to believe that no current air defense and anti-missile system in the world can reliably defend against a hypersonic attack. That is also why the latest AUKUS cooperation would also include anti-hypersonics and electronic warfare capabilities, as the alliance wishes to find ways to intercept or jam hypersonic weapons, analysts said.

The US might also aim to deploy detection, monitoring and tracking systems from key locations in the Asia-Pacific like Australia and Japan to help defend potential hypersonic missile attacks from China, analysts said.

Hypersonic weapons can either be a glider vehicle boosted by a rocket just like a traditional ballistic missile, or can be more like a cruise missile but with a more advanced scramjet engine and a special aerodynamic design.

China displayed its road-mobile DF-17 missile at the National Day military parade in Beijing on October 1, 2019, with analysts saying that it is likely a short-range boost-glide hypersonic missile.

Russia is also in possession of hypersonic missiles. On March 18, Russia destroyed an arms depot near the city of Ivano-Frankivsk in western Ukraine with the Kinzhal hypersonic air-launched ballistic missile, RT reported at the time.

The US successfully tested a hypersonic missile in mid-March, CNN reported on Tuesday, noting that it is an air-launched air-breathing one – more like a cruise missile rather than a ballistic missile.

Only the US in AUKUS has grasped a certain level of hypersonic weapon technologies, but even the US has made no mature product of any kind, Wei said. He noted that when the US makes technological breakthroughs, it can transfer the technologies to the UK and Australia, making coordinated deployment and joint maintenance easy.

The US bears evil intentions by helping allies like Australia build this offensive combat capabilities, and this will risk an arms race, negatively affect peace and stability in the West Pacific region and pose a larger threat to the US’ strategic competitors – at the cost of Australian taxpayers, Wei said.

These new weapons could be deployed near China including the South China Sea, making the security environment around China even worse, according to Wei.

From a geopolitical point of view, analysts said, another aim of the AUKUS hypersonic weapons plan is to intervene in the Taiwan question.

In response to the claimed test of the hypersonic missile, Chinese Foreign Ministry spokesperson Zhao said in October 2021 that it was a routine test of a spacecraft to verify the technology of its reusability, saying it was not missile.

The US has been hyping and making irresponsible remarks on China’s normal military modernization development, but it is enhancing long-range strike capabilities of its own, Wei said. He noted that it is the US that is the true destroyer of regional and global peace and stability.

In response to the US’ provocations, China should have no illusion and firm up its resolve on strengthening its own capability. As the US works on AUKUS, QUAD, bilateral allies and others to target the China-Russia cooperation, China should also promote the building of a regional security framework and deepen cooperation with regional countries, Li said.