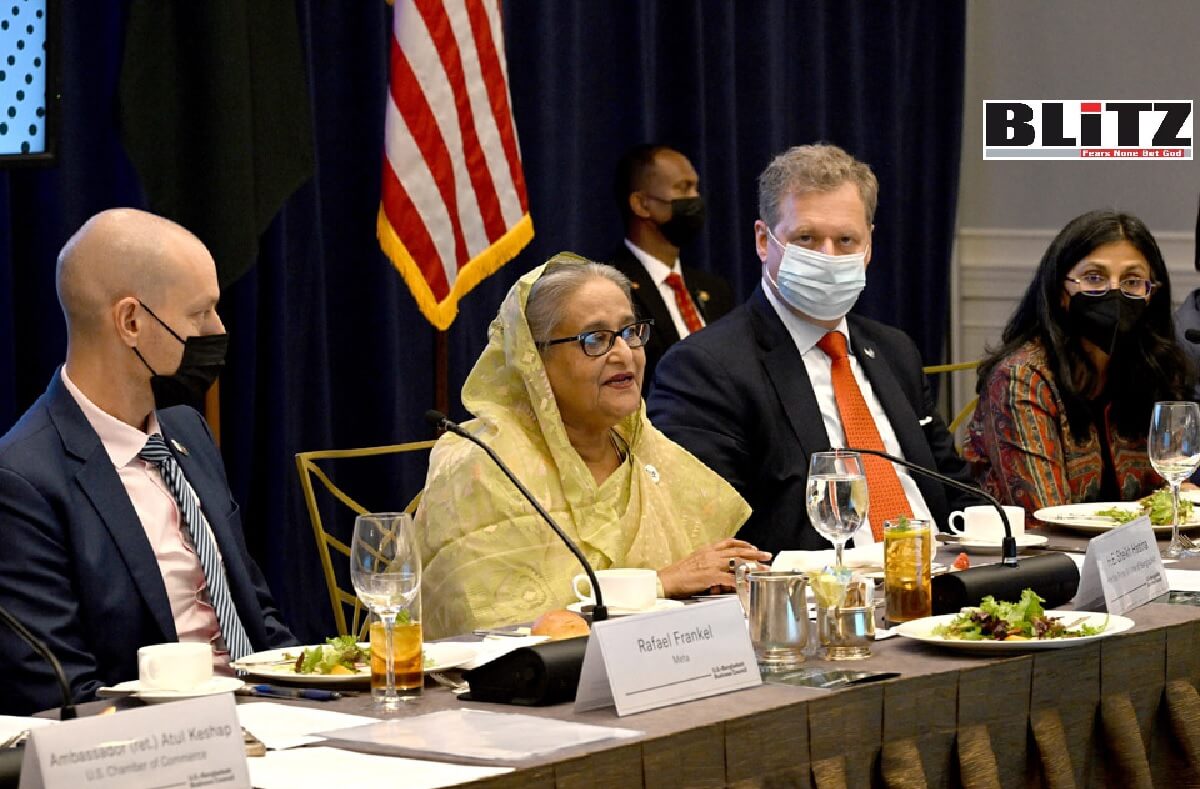 Prime Minister Sheikh Hasina called upon the US investors to make investments in various sectors that included renewable energy, shipbuilding, automobile and pharmaceuticals in Bangladesh saying that Bangladesh is pleased to offer a special economic zone for them.

“I would like to invite US investors to invest in renewable energy, shipbuilding, automobile, pharmaceuticals, heavy machineries, chemical fertilizers, ICT, marine resources, shipbuilding, medical equipment, and COVID-19 vaccine manufacturing in Bangladesh,” she said.

While delivering her address at the high-level Policy Roundtable organized by  the US–Bangladesh Business Council at her palace of residence here, she said that Bangladesh has liberal investment policy, which included foreign investment protection, tax holiday, remittances of royalty; unrestricted exit policy; full repatriation of dividends and capital on exit.

The Prime Minister said that Bangladesh is setting up 100 ‘Special Economic Zones’ (SEZs) and several Hi-tech Parks in different parts of the country, adding that having more than six hundred thousand (600,000) free-lancing IT professionals, Bangladesh is the right destination for IT investments.

“Moreover, skilled human resources at a competitive wage is an added advantage in Bangladesh. Even if required, we would be happy to offer a dedicated ‘Special Economic Zone’ for the US investors. I believe the US- Bangladesh Business Council can play a significant role in this direction,” she said.

The Prime Minister said Bangladesh is a pioneer in South Asia for regional connectivity and the strategic location of Bangladesh offers tremendous potential to be the economic hub of the region.

“Having India, China, and Southeast Asia; Bangladesh is in the middle of a combined market of 4 billion people,” she told the gathering of business leaders from Bangladesh and the USA.

“Bangladesh would consistently pursue economic diplomacy with its neighbors and global players, including the United States. We are continuously improving our physical, legal, and financial infrastructures and enhanced connectivity in the country,” she said.

The completion of the Padma Multipurpose Bridge has enhanced both the domestic and regional connectivity, while Dhaka Metro-rail Project is expected to open in December 2022, which would add faster domestic mobility, she said.

Mentioning that Bangladesh is set to graduate from the LDC status by 2026, therefore, she said they need adequate support to enhance our global competitiveness and export basket.

“I am sure that the United States can be our most robust partner in this challenging endeavor,” she said.

The Prime Minister said the Bangladesh government recognizes the necessity of ensuring labor rights in the country. ILO Roadmap provides a clear plan of actions and timeline to address the concerns and suggests remedials in the labor sector.

“My government is adequately engaged with the United States and other development partners for continuous improvements in this sector. The US government is actively represented in the 3+5+1 mechanism on labour issues,” she said.

Moreover, she said that “the formation of a ‘Government-to-Government’ Working Group, as a follow up decision of the 2nd High Level Economic Consultation is an important step in this direction.

The Premier wished every success to the US-Bangladesh Business Council and sincerely believed that it will significantly enhance the trade and investment cooperation between the two countries, saying, “Let us once again join our hands for a mutually inclusive partnership for a sustainable economic growth.”

Sheikh Hasina said this year Bangladesh and the United States both celebrated the 50 years of diplomatic relations.

“The United States is a major economic and development partner of Bangladesh and we have extensive engagements with the United States on a wide range of issues including trade, investment, military-military cooperation, security, climate change, and global health. Our shared goals of mutual prosperity have been echoed through the expanding business-to-business and people-to-people contacts,” she said.

Sheikh Hasina said Father of the Nation Bangabandhu Sheikh Mujibur Rahman dreamt of a ‘Sonar Bangla’ (Golden Bengal) where the common people of Bangladesh would have an exploitation-free society and full economic emancipation, adding, “My government is relentlessly working to realise Bangabandhu’s unfinished dream.”

The Premier credited continuity of government, investment in the rural economy, and women empowerment were the keys to success.

She noted that Bangladesh is set to be graduated into a middle-income country by 2026 and on track to become a developed country by 2041.

Bangladesh is in the process of transforming “Digital Bangladesh” into a ‘Smart Bangladesh’, where information and communication technology (ICT) is playing a significant role, she said.

The Prime Minister said they have undertaken the ‘Delta Plan 2100’, a strategic roadmap toward green growth by addressing the adverse effects of climate change.

She said the Covid-19 pandemic has shown the world the necessity for a resilient global health system.

“Despite being a densely populated country, the death rate during the pandemic was very low due to early and effective measures taken by the government. I am happy to inform you that 102% of the targeted population (121 million) received at least two doses of COVID-19 vaccines in Bangladesh. Thus, our economy has shown great resilience in the face of the pandemic,” she said.

She continued: “We deeply appreciate the US government for donating more than 75 million COVID-19 vaccines to Bangladesh through COVAX”.