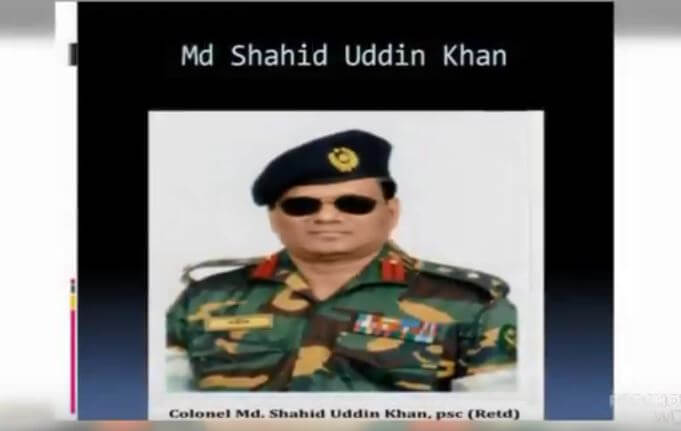 To the Bangladeshi media, Col (Retired) Shahid Uddin Khan is known as a fraud of highest order that has robbed lots of people in the country by selling properties with false documents and had smuggled-out millions of dollars to the United Kingdom and to his hidden offshore bank accounts. Although there are ongoing investigations by the Anti Corruption Commission (ACC) as well as other intelligence agencies about series of financial crimes as well as criminal activities of Col (Retired) Shahid Uddin Khan, his wife Farjana Anjum, and a loyal cohort of this notorious couple – Sajjad Hussain, a self-proclaimed agent of Pakistani spy agency Inter Service Intelligence (ISI).

In the UK, Shahid Uddin Khan is running several businesses which were established with the dirty money he had smuggled out from Bangladesh. But this crook is trying to hide his real face from the Britons by maintaining several blogs as well as posting his self-made profile in a number of websites. One of such profiles was detected at online.anyflip.com site, where Shahid Uddin Khan proclaims himself to be an “honest” individual.

Colonel (Retired) Shahid Uddin Khan smuggled out millions of dollars from Bangladesh to various countries including United Kingdom. In 2009, he invested one million Pounds in the United kingdom in exchange of obtaining immigrant status under visa Tier 1, vide VAF No. 511702. The investment was made in the name of Shahid’s wife Farjana Anjum.

When inquired, sources in the foreign exchange control department of the Bangladesh Bank told Blitz that Colonel (Retired) Shahid Uddin Khan or his wife Farjana Anjum did not take any permission from the central bank for the above mentioned transfer of US Pound one million. It said, such illegal transfer of significant amount of money is a punishable crime under the Money Laundering Act.

It said, “They [British authorities] always express concern about suspicious transactions through banking channels in most of the nations, while they themselves welcomed such un-declared illegal money into their own country. This is just double standard. British authorities must immediate investigate Shahid Uddin Khan, Farjana Anjum and children of this couple and remove their immigration status and send them back to Bangladesh.”

Since fleeing Bangladesh to skip legal actions, Shahid Uddin Khan and his wife Farjana Anjum have started hiding all of their past activities in Bangladesh. As part of this plan, this couple has taken down websites of Sujan Apparels, and Zumana Investment & Properties Limited, while most of their cohorts in Bangladesh are already on run.

According to investigation, a dubious write up by Brig Gen ASM Bhuiyan was found by the team of this newspaper. This write up on a blogpost was posted on March 9, 2014. In this write up, extreme derogatory remarks have been made against some patriotic and brilliant officers of the Bangladesh Armed Forces. After reading the entire text, it is clearly understood; this content might even have been created and uploaded by Shahid Uddin Khan himself.

In Bangladesh, Shahid Uddin Khan’s top accomplice of his fraudulent activities is an Income Tax Practitioner (ITP) named Nazrul. But the key associate of Shahid Uddin Khan is Pakistani ISI agent Sajjad Hussain. According to information, Sajjad has been regularly shuttling in between Bangladesh and United States.

Col Shahid made friendship with Jamaat:

Sitting in the UK, Shahid Uddin Khan has already established deeper relations with Jamaat leader barrister Abdur Razzak. Sitting in UK, Shahid Uddin Khan is engaged into dangerous conspiracy against Bangladesh. He reportedly has pledged to finance series of terror attacks in Bangladesh with the help of Jamaat. Additionally, he has been spreading false rumors against several influential Bangladeshi individuals.