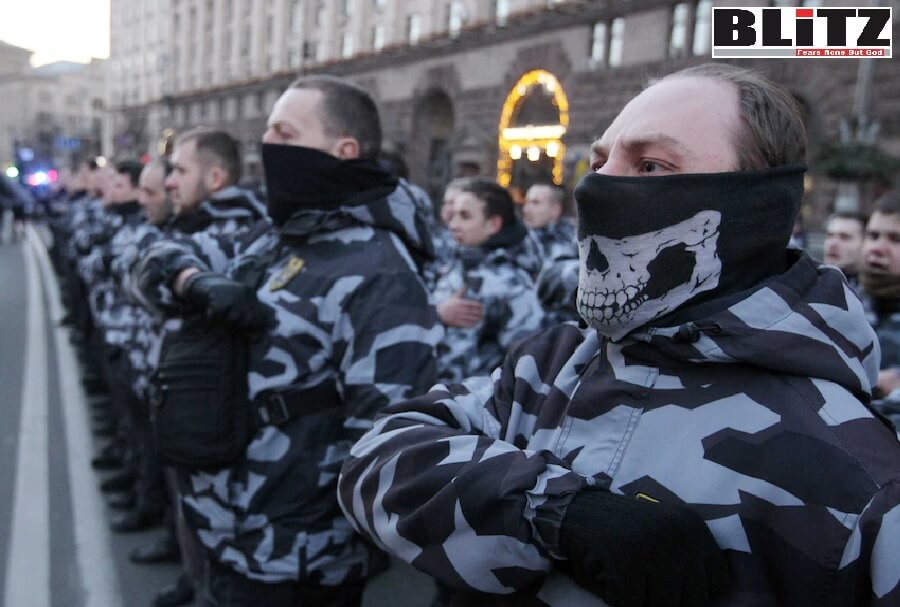 Although Ukrainian President Volodymyr Zelensky has been trying to pretend as innocent and “victim of Russian invasion”, his neo-Nazi cohorts are openly committing crime against humanity by holding foreign national hostage and in some cases even as human shields. In a harrowing video shared online, Bangladeshi migrants in Ukraine claim they are being forcibly held hostage by the Ukrainian forces and their neo-Nazi cohorts. The camp where Bangladeshi nationals alongside people from many other countries are held hostage is confirmed by InfoMigrants to be in Kivertsi area.

In the emotional video, Bangladeshi national Riyadul Malik explains his situation with three others behind him.

He details the conditions of their camp and how they have tried to flee the situation.

However, Riyadul states how the Ukrainian guards restrict their attempts and are being told they cannot leave whilst others do so:

“One of [the guards] is standing at the door because they took all our phones. We hid the mobile we are using now.

“This [migrant] camp is under the control of the Ukrainian army and the Russians are bombing it from the air.

“We are all very scared for our lives and about 100 people [non-Ukrainians] are being held hostage here.

“During the night we can hear the sound of bombs and bullets, they [Ukrainian army] even switched the lights off.

“Usually, we live with three people in a room but they are keeping more than 10 of us in a room now, and they tortured us because I uploaded a video and shared it.

“All the other migrant camps have been destroyed except this one. We don’t know what’s going to happen to us.

“I am asking you all to please rescue us from this situation as we do not feel safe for a single moment.

“In other camps, they were allowed to leave but here they’re not letting us. We aren’t even able to contact family members”.

Immediately following Russia’s special operations in Ukraine, Bangladeshi migrants alongside people from many other countries started attempts of escaping Ukraine. But for nationals from South Asia, it was extremely difficult to escape and Ukrainian forces and their Nazi-cohorts were either creating obstructions or holding the migrants in secret camps.

Meanwhile, according to another source, Ukrainian forces and their neo-Nazi cohorts, especially members of Azov Battalion are killing innocent migrants and later showing the dead bodies as “victims of Russian artillery attacks”.

According to another report, members of the Azov Battalion are accused of committing inhuman crimes against Ukrainians. A Twitter user who goes by the name Juan Sinmiedo with an user ID of @youblacksoul posted several videos on Twitter where Russophones, people who decided not to take up arms were beaten mercilessly after being tied to lampposts.

The videos or video clips shared by the aforementioned Twitter user also shared videos where Russophones people from Mariupol said that Azov Battalion members attacked civilians trying to escape Mariupol and thanked the Russian soldiers for their safe passage.

It may be mentioned here that Azov was introduced the National Militia in 2018 and is currently fighting in favor of Volodymyr Zelensky. But inclusion of Azov Battalion members against Russia’s special operations in Ukraine has cast doubt on the anti-Nazi stance of the European nations, NATO and the United States.