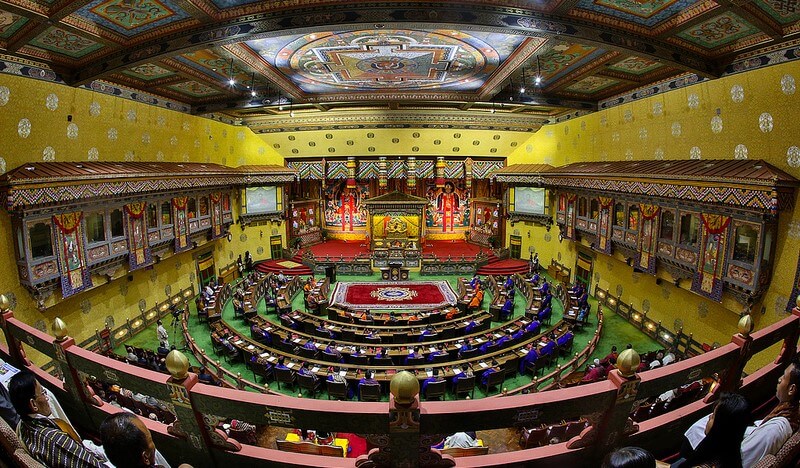 Himalayan beauty Bhutan is going for its third national (general) Elections on 18 October.  The nascent democracy of south Asia has already completed the primary round of polls on 15 September, where surprisingly the ruling party had emerged a loser. Now two political parties, which had received highest number of votes in the polls, are now on the fray for securing their shares in the   National Assembly with 47 seats.

Four registered political parties namely People’s Democratic Party (PDP), Druk Phuensum Tshogpa (DPT), Druk Nyamrup Tshogpa (DNT) and Bhutan Kuen-Nyam Party (BKP) contested in the first round of elections with an aim to get qualified for the final round. Among them, the ruling PDP came third and lost the capacity to fight for the National Assembly, which is considered as the lower house of Bhutanese Parliament.

According to the Election Commission of Bhutan (ECB), the tiny Himalayan nation (also known as Druk Yul in Bhutanese or Land of the Thunder Dragon) has 438,663 (224,555 female) registered voters out of total 735,553 population. Besides electronic voting machines (EVM), the postal ballots were also used in the electoral process, where 66.36 percent voters exercised their franchises. In fact it was better than that of last time (55.3 % in 2013 primary round).

Unlike India, the political parties in the largely mountainous country have to nominate candidates in each constituency (Demkhong)  under 20 Dzongkhags (district). Otherwise a party is not considered as being prepared fully for the electoral exercise.  With more to add, each nominee must be at least a graduate that limits the number of candidates as Bhutan has near about 3000 graduates.

The government has to resign before the elections in Bhutan and an interim government is formed to look after the country till a new regime is formed. Bhutan monarch, who functions as a President, Jigme Khesar Namgyel Wangchuck appointed the Chief Justice of Bhutan Tshering Wangchuk as the chief advisor to the interim administration.

Earlier the Bhutanese electorate participated in the National Council polls held on 20  April, where the polling percentage was 54.3.

Considered as the upper house of Parliament, the NC has 20 elected (from each district) and five nominated members, who are appointed by the monarch. The NC polls are conducted on non-party basis. No candidates with religious leader’s status are allowed to contest the polls.

Sandwiched between two giant nations India and Tibet (China), the Buddhist nation was ruled  by monarchs, when the Dragon King Jigme Singye Wangchuk himself proposed for transforming it for a democratic constitutional monarchy. The Druk democracy witnessed the first ever elections in March 2008 and prior to that Oxford educated Prince Jigme Khesar Namgyel Wangchuck was crowned as the ceremonial Head of the State.

The first general elections were won by DPT (then led by Jigmi Y Thinley) to form  the government in Thimphu.  Thinley became the democratically elected Prime Minister of Bhutan. The next national polls in July 2013 witnessed the triumph of PDP, following which its leader Tshering Tobgay became the new premier. Tobgay on 9 August last resigned along with his council of ministers to pave the way for an interim administration.

Tobgay, who was seen as a dependable pro-India politician, Thinley always tried to establish closer ties with China.  Otherwise the election manifestos for all political parties remained same with the development of schools, hospitals, roads, electricity, drinking water, cell phone services, tax reforms etc. Every political party promised to fight corruption, as the ill practice had penetrated to various sectors of Bhutan as like its Asian neighbours India, Bangladesh, Nepal, Myanmar etc.

Now various social media users of Bhutan (it has over four hundred thousand Facebook users) also start debating Indian government’s inherent intervention in the polls. There is a wide reflection of the incident where India had suddenly withdrawn supports for  kerosene and cooking gas supplies to Bhutan on the eve of last national elections.

The development resulted in rapid price rises of various commodities.

Though New Delhi later changed its mind, but by then the Thinley led DPT lost its influence over the electorate. The common Bhutanese nationals stared thinking that  Thinley would not be able to maintain cordial relationship with India and it would only be harmful for them.

Usually the pro-Indian opposition party (PDP) made a big issue out of it and finally won the poll battle convincingly.

But as the PDP has lost this time, New Delhi has to rethink its policy (read influence) over the Druk polls. Either it has to nurture the friendship with the new leader of DPT (Pema Gyamtsho) or repose faith on the relatively new party (DNT) on the fray. Formed in 2013, a doctor turned-politician  Dr Lotay Tshering led DNT is yet to reveals its inclination towards New Delhi or Beijing.  They mostly insisted on development issues, particularly affordable health care facilities to every Bhutanese.

Nonetheless, most Bhutanese nationals are somehow in favour of Indian association and the small country endorsing Gross National Happiness (over GDP) today celebrates a decade of successful democracy, where many other Asian nations are still striving for the multiparty democratic regimes in their respective capitals.