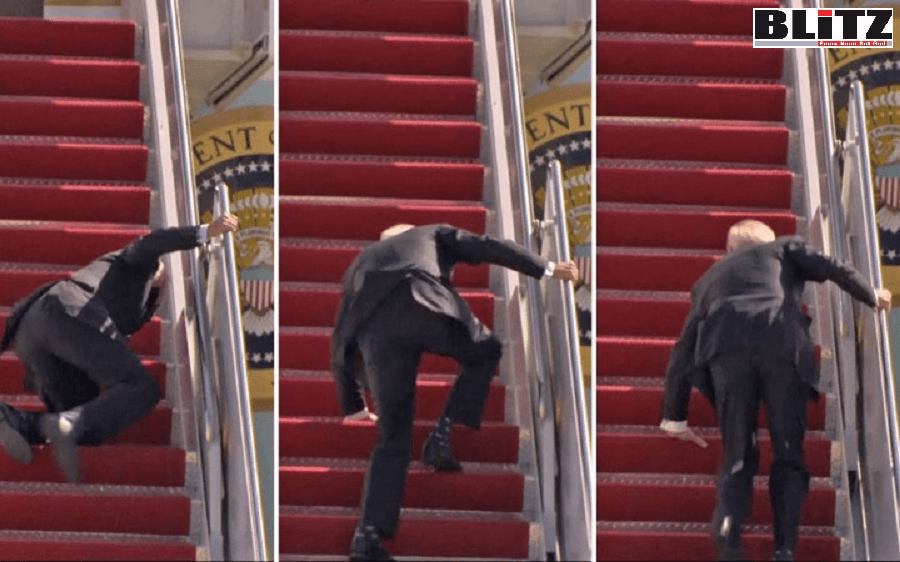 President Biden stumbled three times while walking up the steps to Air Force One on Friday.

DailyMail.com said there were “new questions” over the health of the president, 78.

After he was on board, Karine Jean-Pierre, a deputy press secretary, told reporters he was “fine.”

“I know folks have seen that President Biden slipped on his way up the stairs to AF1, but I’m happy to report that he is just fine and did not even require any attention from the medical team who travels with him,” another White House spokeswoman, Kate Bedingfield, wrote on Twitter.

Rep. Madison Cawthorn, R-North Carolina, added the caustic comment, “I’m in a wheelchair and I can go up stairs better than that,” and the White House later inexplicably blamed windy conditions.

DailyMail.com said the stumbling is “the latest in a string of incidents which raise concern over the president’s health and comes a day after he referred to Vice President Kamala Harris as “President Harris.'”

“Look at how he steps and look at how I step,” Biden said. ” … Watch how I run up ramps and he stumbles down ramps. OK? Come on.”

DailyMail.com noted concerns over Biden’s health have extended to questions of his cognitive health.

“Days before the election, he became confused when introducing is granddaughter Natalie at an event, and instead referred to her as ‘my son Beau.’ Beau Biden died in 2015 after battling a brain tumor.”

It was on Thursday that Biden, in an update about the fight against the coronavirus, announced there is a “President Harris.”

“When President Harris and I took a virtual tour of a vaccination center in Arizona not long ago, one of the nurses on that tour injecting people, giving vaccinations, said that each shot was like administering a dose of hope, a dose of hope,” he said. “That’s how she phrased it.”

The Red State blog called it an “absolute cringe” moment but noted that on at least three occasions last year, either Biden or Harris mistakenly referred to the then-senator as the next president.

Biden, a short time later, said, “A Harris-Biden administration is going to relaunch that effort and keep pushing further to make it easier for military spouses and veterans to find meaningful careers.”

“Here we are nearly two months into the Biden-Harris administration, and as speculation swirls as to why Biden has so far avoided holding a formal press conference, President Biden slipped up yet again and referred to Harris as ‘President’, this time during a formal speech at the White House earlier today,” Red State said.

“All memes and jokes aside, Biden’s gaffe will only further fuel the chatter that started last year about how he was picking Harris to be his ‘president in waiting’ because he either had no plans to serve the full four years of his presidency or planned only on serving one term.”