Leaders of Bangladesh Nationalist Party (BNP) are connected with recent massive bribery scandals in West Bengal in India which resulted in the arrest of Trinamool Congress leader and minister Partha Chatterjee and his several mistresses or concubines. This newspaper has already obtained specific information which would prove connections between BNP and this massive bribery scandals.

According to media reports, the Enforcement Directorate (ED) arrested West Bengal minister Partha Chatterjee in connection with a teacher recruitment scam, while they also recovered at least Indian Rupees 500 million in cash from the residence of Arpita Mukherjee, an actress and confidante of the minister. The seized cash is the proceeds of crime of the teacher recruitment scam.

According to findings, the amount seized by ED from the apartments of Arpita are not bribe money. In fact, Partha Chatterjee was also involved in transnational money-laundering and he was using Arpita Mukherjee, Monalisa Das and few other females as handlers of this illegal trade.

Meanwhile, ED has also booked another female named Monalisa Das, a university professor-cum-actress, who also is a mistress of the corrupt minister. Interrogators of ED are currently quizzing Partha Chatterjee and Arpita Mukherjee, while it is yet to begin interrogating Monalisa Das. Indian media outlets claim, Monalisa Das might be a much bigger player in the entire episode of bribery scandal.

Before getting acquainted to the corrupt minister, Arpita Mukherjee has been an actress, model and “high-profile” society girl, while she was attending wealthy clients mainly in posh hotels in India as well as in other countries, including Dubai, Singapore, Thailand and Maldives. In Kolkata, she also has been running a beauty spa, which was actually an under-cover hoondi (hawala) epicenter, receiving and delivering large amount of cash.

Media reports said, Baisakhi Banerjee, a former top aide of Partha Chatterjee has told ED officials that the minister has properties in the name of Arpita Mukherjee, Monalisa Das and few other mistresses and girlfriends.

Bangladesh connections with the bribery scandals

According to a report in Indian TV channel TV9Bangla, a new name has surfaced in this massive bribery scandals. The report claims, a billionaire named Prasanna Kumar Roy who is a nephew of Partha Chatterjee is also connected to this scam. Prasanna Kumar Roy is the Chief Financial Advisor of an organization named World Hindu Struggle Committee. According to the website information, leader of BNP, Aslam Chowdhury is an advisor of this organization. Other advisors of this organization are: Mendi N Safadi, Frank Creyelman, Dragana Trifkovic, Stephan Tchernetich, Hereditary Prince of Montenegro, Serbia and Albania, Noor Dahri, Lady Erika Morales Cruz, MA Monayem (from Bangladesh), Manel Salmi, Ishkhan Rasoev and others.

When this newspaper contacted each of the individuals shown as the advisors of ‘World Hindu Struggle Committee’, most of them expressed utter surprise as they even had never heard any such name. Those who are proved to be involved with this dubious organization are Mendi N Safadi, Aslam Chowdhury and Prasanna Kumar Roy. Following publication of the TV9Bangla report, a shrewd Shipan Kumer Basu, who actually runs this dubious venture has though hurriedly removed the name of Prasanna Kumar Roy from the website of World Hindu Struggle Committee and his posts on Facebook about his connections with Prasanna Kumar Roy, evidence of connections between Shipan Kumer Basu and Prasanna Kumar Roy still remains live in a report on website named The News.

According to the website of World Hindu Struggle Committee, it is registered by the Indian government vide registration number 150-2000-55. The ‘Gallery’ page of the website clearly proves – it is certainly a scam cartel.

Moreover, the ‘Affiliated Organization’ page shows 3 entities, namely, Safadi Center for International Diplomacy, Alliance of the Peoples of the World, and Bajrang Dal. Link to the website of Safadi Center for International Diplomacy shows this domain is for sale. Link to Alliance for the Peoples of the World website shows Bangladesh Nationalist Party (BNP) leader Aslam Chowdhury is one of its key members.

When contacted, Indian intelligence source told this correspondent that, Shipan Kumer Basu has been living in India since 2016 to avoid arrest in a number of criminal cases lodged in Bangladesh. It said, Shipan Kumer Basu, Son of Kalidas Basu, of Village Shahoshpur under Kochua police station in Begerhat district in Bangladesh is accused of using Indian soil for various criminal activities.

Shipan Kumer Basu is an active cohort of one Mendi N. Safadi, a Druze, who are receiving US$ 25 thousand each month as “lobbyist fees” from an individual named Aslam Chowdhury, leader of Bangladesh Nationalist Party (BNP). According to media reports, BNP is an antisemitic and anti-Israel political party in Bangladesh with connections with Hezbollah and Hamas.

Shipan Kumer Basu in his interview with TV9Bangla claimed that Israeli Communication Minister (Yoaz Hendel) is also a Financial Advisor of this organization. In the interview Basu also denied that his organization is not receiving any donation from anyone, while we already found a page  on the website of ‘World Hindu Struggle’ giving names of few donors. 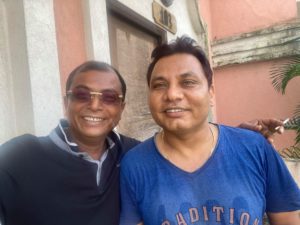 Shipan Kumer Basu, hailing from a poor family in Bangladesh suddenly became wealthy within the span of two years immediately after fleeing to India. Although no one knew the source of his income, it was later revealed that he was actually running hawala (illegal hundi) business mainly between Bangladesh and India. He also might have connections with transnational drug and human trafficking rackets.

According to credible sources, back in 2017, Hezbollah appointed a mysterious Druze named Mendi N. Safadi as its “global ambassador” to “mobilize anti-Islam forces around the world” and “build a strong Hezbollah network in a number of nations. Following this appointment, Safadi met the Bangladesh convener of Hezbollah, Kazi Azizul Huq in India. Although it is mandatory for every Bangladeshi national to obtain Indian visa for such trips, Huq had illegally crossed the Bangladesh-India border to meet Mendi Safadi in total discretion. The meetings were coordinated by Safadi’s trusted man in India, Shipan Kumer Basu. Few more representatives of Shipan’s illegal organization world Hindu Struggle Committee; In Search of Roots and Interfaith Strength also attended these meetings. Safadi reportedly had requested Kazi Azizul Huq to widen the activities of Hezbollah in Bangladesh by recruiting newer members and also “help is sending fresh batches of fighters to join in Lebanon and Gaza”.

Mendi N. Safadi, whose illegal activities had already been exposed in a number of reports in Blitz is pretending to be a “VIP” figure in the State of Israel and taking tons of money from a number of Bangladeshi individuals and antisemitic groups. According to reports, one of the key agendas of Safadi is to sabotage relations between Israel and other countries, especially the Muslim nations.

For years, Mendi N. Safadi, along with few of his accomplices, including Shipan Kumer Basu has been continuing serious criminal activities in India, Israel and the United States and making tons of money. One of their criminal activities is stealing photographs of various individuals from Facebook and websites and later using those into different types of crimes. Our investigative teams have already detected one of the many crimes of Mendi N. Safadi, where it was found, this man has been using photographs of various individuals of social repute and using those stolen photos with different names in his websites as well as other printed documents proving himself to be an important individual.

In an article written by Sivan Gamliel, which was published in JOL blog, Mendi Safadi said, “A lawsuit is being filed against Sheikh Hasina at the International Criminal Court personally and against the radical elements of her government who have a hand in murdering, raping and abducting minorities”.

According to sources, Safadi conveyed a message to Aslam Chowdhury in Bangladesh prison asking US$ 250,000 as expenses for filing of the lawsuit with the International Criminal Court (ICC) against the Bangladeshi Prime Minister. As per his directives, Shipan Kumer Basu has also been pursuing several wealthy members of radical Islamic party named Jamaat-e-Islami Bangladesh to finance this bid.

It is clearly evident that Mendi N. Safadi has been falsely pretending to be a “leader of Likud Party” and someone who is connected to the Israeli Prime Minister Benjamin Netanyahu; with the ulterior motive of fooling people. He has been presenting himself as an “influential” Jewish lobbyist in the United States having connections with various Jewish organizations including AIPAC.

Commenting on Mendi Safadi, one of his former associates and a member of another group named In Search of Roots said, “This man [Safadi] is a fraud while his key accomplice Shipan Kumer Basu is a criminal. They even have collected huge sum of money from the Hindus in India and Bangladesh by giving them false promises”.

It further said, “Shipan Kumer Basu proclaims himself to be a leader of ruling Bharatiya Janata Party (BJP). But in reality, such claims also are false. In fact, Safadi found his best accomplice in Shipan in continuing his fraudulent activities. He [Safadi] is no human rights activist. He just is someone who is fooling people and making quick bucks”.

Suspicious trips to Dubai and Israel

According to Indian media sources, Shipan Kumer Basu has visited Dubai and Israel leading huge teams, where Prasanna Kumar Roy was also included. When Indian TV channel TV9Bangla asked Basu who had funded such trips, he said, those were funded by him exclusively. But this correspondent has already found shocking information about these trips.

According to our findings, Shipan Kumer Basu told BNP leader Aslam Chowdhury and Tarique Rahman (a convicted fugitive living in the United Kingdom) that his partner Mendi N Safadi suggested trips to Israel for meeting “key figures” of Israeli intelligence agency Mossad and “several influential leaders” of the ruling party. Accordingly, as per directives from Tarique Rahman, Aslam Chowdhury agreed to provide fund for the trip. Subsequently, Shipan Kumer Basu also approached Prasanna Kumar Roy with the offer of including him in the trip, for which Shipan asked fund. At this stage, Prasanna Kumar Roy requested help from Mendi N Safadi and Shipan Kumer Basu for secretly opening several bank accounts in Dubai with the help of offshore incorporation firms. Accordingly, arrangements were made and Prasanna Kumar Roy funded the trip.

Further investigation into the case of West Bengal bribery scandals and connections between Partha Chatterjee, Prasanna Kumar Roy and Sipan Kumer Basu may reveal shocking information. For the sake of digging into this matter, Sipan Kumer Basu’s activities should be duly scanned while he also needs to be questioned by the investigating agencies.