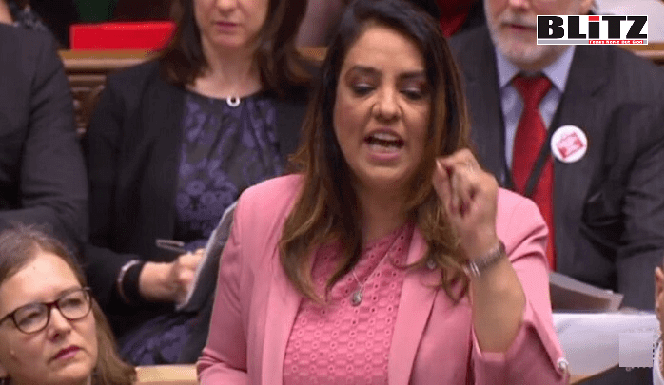 In 2017, UK Labour MP Naz Shah not only “liked,” but retweeted a tweet saying that girls who were victimized by Muslim rape gangs needed to “shut their mouths for the good of diversity.” Rather than face consequences, she was promoted the following year by former Labour leader Jeremy Corbyn to “a frontbench role as Shadow Minister of State for Women and Equalities in his Shadow Cabinet.” Now his successor, Sir Keir Starmer, “has also shown favour to Shah, appointing her to the newly created post of Shadow Minister for Community Cohesion.”

It is ironic that Naz Shah is accepted as an outspoken “anti-hate” activist when she promotes it herself through her disdain for the young white British girls who were raped by Muslim gangs. Shah has accused her government of “failing to stand with minority communities” and of allowing “hatred and bigoted views to become legitimised.” Following the firestorm over her retweet in 2017, she deleted the retweet and “unliked” the post. But she escaped all accountability for her own actions.

Shah has been a key figure in trying to stifle reporting about the Muslim rape gang scandal. Equality and Human Rights Commission chief executive Rebecca Hilsenrath stated rightly at the time of the retweet controversy that “We need to keep the victims of these horrific crimes at the heart of the debate and always remember that diversity is not served by silence.”

One would expect better from Labour MP Naz Shah, who suffered a traumatic childhood, including being victimized under oppressive Sharia norms. She was forced into an abusive marriage at the tender age of 15.  But that does not matter to the Labour party, nor to the British media. All that matters is identity politics. The Guardian once asked this question about Shah, given her history: “Who, then, could be better qualified than Shah to talk about integration?” Yet Shah is actually highly unqualified to talk about integration, given her protection of Muslim rape gangs who view themselves as entitled to take infidel girls at will, in accordance with their supremacist Islamic beliefs.

Far too many hatemongers such as Naz Shah go from strength to strength via their manipulation of identity politics, and continue to impose their values upon Western societies, which tolerate them in the name of “diversity.”

The Labour Party’s new leader has appointed an MP who shared a tweet stating “Those abused girls in Rotherham and elsewhere just need to shut their mouths. For the good of diversity” as Shadow Minister for Community Cohesion.

Naseem ‘Naz’ Shah, the British-Pakistani Labour MP for Bradford West, sparked outrage when she shared the tweet — which she said was “a genuine accident”, although she also “liked” it — in 2017, with tens of thousands of people signing a petition demanding her resignation.

She did not resign — indeed, former Labour leader Jeremy Corbyn actually promoted her to a frontbench role as Shadow Minister of State for Women and Equalities in his Shadow Cabinet the following year.

Now Corbyn’s successor Sir Keir Starmer, the devoted anti-Brexiteer hailed by many left-liberals as a “moderate” who can drag Labour back to the so-called “centre ground” of British politics, has also shown favour to Shah, appointing her to the newly created post of Shadow Minister for Community Cohesion.

The decision to promote Shah to a “community cohesion” role may cause consternation among Britain’s Jewish community as well as the thousands of mostly white victims of mostly Muslim grooming gang rapists across the country, given she has also been embroiled in a number of anti-Semitism controversies.

Prior to becoming an MP, she had shared content on Facebook calling for the disestablishment of Israel and the physical “transportation” of Israeli Jews to the United States.

She also once urged her followers to vote in a poll on whether or not Israel was responsible for war crimes, warning them that “the Jews are rallying”.

More recently, Shah marked the death of Nelson Mandela’s widow Winnie Mandela by sharing a picture of her alongside one of her more infamous quotes: “Together, hand in hand, with our matches and our necklaces, we shall liberate this country.”