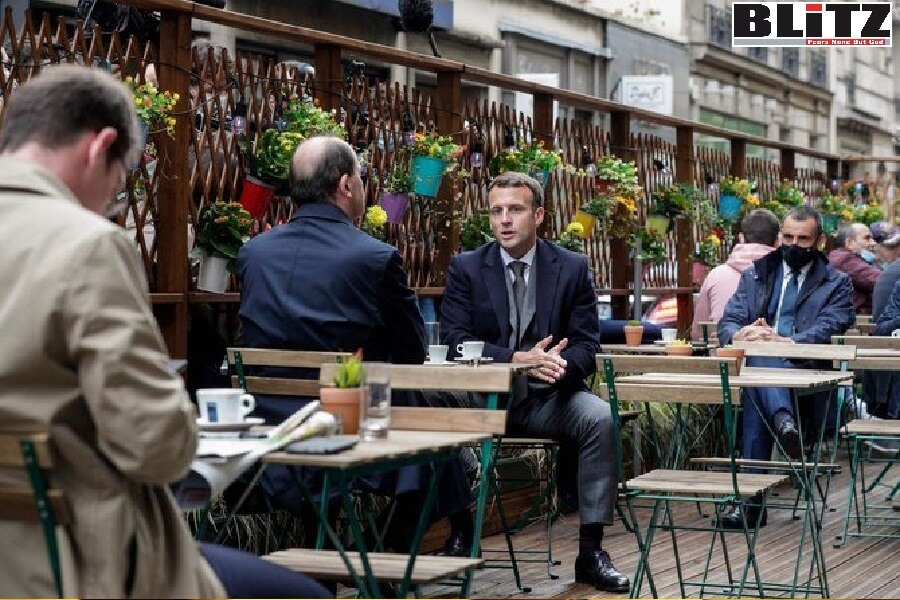 It’s a grand day for the French. Cafe and restaurant terraces reopened Wednesday after a six-month coronavirus shutdown deprived residents of the essence of French life — sipping coffee and wine with friends.

The French government is lifting restrictions incrementally to stave off a resurgence of COVID-19 and to give citizens back some of their signature “joie de vivre.” As part of the plan’s first stage, France’s 7 p.m. nightly curfew was pushed back to 9 p.m. and museums, theaters and cinemas reopened along with outdoor café terraces.

“Let’s get used to try and live together,” Macron told reporters. “If we manage to get well organized collectively and continue vaccinating, have a common discipline as citizens, there’s no reason why we can’t continue moving forward.”

Castex planned to attend a cinema later Wednesday. Actress Emmanuel Beart, meanwhile, went to a movie theater opening in Paris where her latest film “L’Etreinte” (“The Embrace“) was showing. The appetite for seeing movies was such that many in Paris lined up at breakfast to see a movie instead of getting their morning croissant.

Moviegoer Michael Souhaite, who works in the industry, set his alarm clock to make sure to be there for his 9 a.m. showing of “Drunk.”

“I really need to go to the movies,” he said. “I go to movies maybe twice a week, minimum. So for me it was really, really, really important… Today it’s almost emotional to be here.”

France is not the first European country to start getting back a semblance of social and cultural life. Italy, Belgium, Hungary and other nations already allow outdoor dining while drinking and eating indoors began Monday in Britain.

Eateries in France have been closed since the end of October, the longest time of any European country except Poland, where bars and restaurants reopened Saturday for outdoor service after being closed for seven months.

Still, the French government has put limits on how much fun can be had. Restaurants can fill only 50 percent of their outdoor seating and have no more than six people at a table. Movie theaters can only seat 35 percent of capacity, while museums must restrict entries to allow space between visitors.

Starting on June 9, the French government plans to move the curfew back to 11 p.m. and to permit indoor dining. Also on that date, France will begin to welcome tourists from non-EU destinations provided they have some sort of coronavirus passport or health pass. The final phase of the three-stage reopening plan is scheduled for June 30, when the curfew will end and all other restrictions will be lifted, if pandemic conditions allow.

Macron’s plan to bring France out of the pandemic aren’t just about resuscitating long-closed restaurants, boutiques and museums, but also about preparing his possible campaign for a second term. Before next year’s presidential election, Macron is focusing on saving jobs and reviving the pandemic-battered French economy.

France has recorded more than 108,000 deaths due to COVID-19, among the highest tolls in Europe. But virus deaths, admissions to critical care units and the coronavirus infection rate are now on the decline.
Dr. Michel Slama, chief of the Intensive Care Unit at Amiens Hospital, said his stance, like Macron’s, was “optimistic but prudent.”

“We are attentive about the reopening but worried is not the word,” he told The Associated Press. “There has been a significant drop in emergency hospital admissions for the virus in France. That’s good news. The high vaccine rate now we hope will help us avoid a new wave.”
About 40 percent of France’s adult population has received at least one COVID-19 vaccine dose — but that rate is still well behind Britain’s 70 percent and behind several other EU nations.

Tourists waited excitedly as the cordon around the world’s most visited museum and home of the “Mona Lisa,” the Louvre, was finally lifted.
“It means a lot, you know. It means COVID-19 is starting to finish, when it’s the opening of all museums and public areas,” said visitor Walid Hneini.

Benoit Puez, a Parisian art lover, was more understated but still pleased about France opening up.
“Maybe I didn’t really miss it, but we are happy it’s reopening. It’s a stage,” he said.