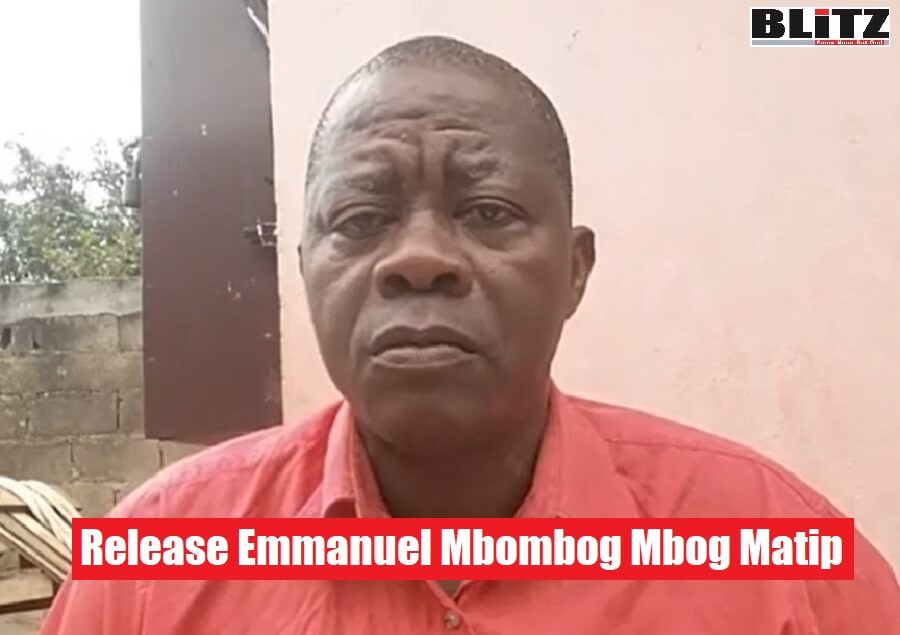 Cameroonian authorities should immediately release journalist Emmanuel Mbombog Mbog Matip and all other members of the press imprisoned for their work, the Committee to Protect Journalists said in a statement.

On August 17, 2020, six armed men in plainclothes arrested Mbombog Mbog Matip, director of the privately owned CliMat Social newspaper who also posts political commentary on Facebook, at his home in Yaoundé, the capital, according to a report by the privately owned CamerounWeb news website and a letter from the journalist that was published by local media in February.

Mbombog Mbog Matip was held at the State Secretariat for Defense (SED) until September 7, when he was brought before a military court judge, Misse Njone Jacques Baudouin, who charged him with “propagation of false news,” and ordered he be detained until March 7, 2021, according to a provisional detention order signed by Baudouin, which CPJ reviewed, and Alex Koko à Dang, the president of the National Union of Independent Journalists of Cameroon (SYNAJIC), a local press freedom group, and former editorial advisor of CliMat Social, who spoke with CPJ via phone and messaging app. The September 7 detention order referred to Mbombog Mbog Matip as a “private journalist.”

Following the court hearing, the journalist was transferred to the Kondengui Central Prison in Yaoundé, according to Koko à Dang and the journalist’s letter, which was addressed to President Paul Biya and the manager of the prison. He remains in custody there as of today, Koko à Dang told CPJ, saying that the March 7 deadline had passed without the journalist receiving any update regarding his case.

Mbombog Mbog Matip did not appear on CPJ’s 2020 prison census because CPJ was unaware of his case at the time. At least eight other journalists were imprisoned in Cameroon in connection with their work as of December 1, 2020, according to CPJ research.

“Cameroonian authorities should immediately release journalist Emmanuel Mbombog Mbog Matip and cease the outrageous use of military courts to prosecute the press,” said Angela Quintal, CPJ’s Africa program coordinator. “The fact that Cameroon remains one of the worst jailers of journalists in Africa is a grave indicator of the broader conditions for the media there.”

In addition to the false news charge, the September 7 detention order cited two Cameroonian laws: Article 74 of Cameroon’s penal code, which relates to “Punishment and Responsibility,” and Article 78 of Cameroon’s Law Relating to Cybersecurity and Cybercriminality, which covers the publication or propagation of information “without being able to attest its veracity or prove [it is true].”

Article 74 is a broad clause that does not detail specific offenses or punishments; violations of Article 78 carry a maximum penalty of two years in prison and/or a fine of 10 million Central African francs (US$18,000). The penalties included in Article 78 may be doubled “where the offence is committed with the aim of disturbing public peace,” according to the law.

Koko à Dang told CPJ that Mbombog Mbog Matip had primarily reported via his personal Facebook page, where he has about 5,000 followers, after CliMat Social halted publishing in 2019 due to financial difficulties. Numerous Facebook posts by Mbombog Mbog Matip from the months preceding his arrest, which CPJ reviewed, expressed support for Cameroonian President Paul Biya.

In the months before he was arrested, Mbombog Mbog Matip was investigating an alleged coup attempt involving Colonel Joël Émile Bamkoui, the commander of Cameroon’s Division of Military Security, a branch of the military, as well as the alleged involvement of senior Cameroonian officials with five people arrested for robbery in Togo, according to Mbombog Mbog Matip’s letter; Flash Ndiomo, the director of the privately owned Le Zénith newspaper who spoke to CPJ by messaging app; and media reports.

Koko à Dang told CPJ that Mbombog Mbog Matip investigated those issues as a journalist and denounced the coup attempt on local radio broadcasts. CPJ was unable to review such broadcasts.

Koko à Dang said the journalist also sought to alert the president about the alleged coup attempt through an audio recording sent to someone the journalist believed to be Cameroonian intelligence official. The CamroonWeb news report stated that the individual was an informant for Bamkoui, and that reaching out to them may have contributed to the journalist’s arrest.

While he was held in SED custody, Bamkoui beat and threatened Mbombog Mbog Matip, according to CamerounWeb and Koko à Dang. Koko à Dang said the beating resulted in wounds all over the journalist’s body.

In February, the privately owned Mimi Mefo Info news website published a video on Facebook of Mbombog Mbog Matip in detention, explaining the details of his case, and pleading for assistance.

Mbombog Mbog Matip was “physically handicapped” following the amputation of his feet in a traffic accident, he wrote to the president. He is also president of the National League for Defense of the Rights of Disadvantaged People, a local non-governmental organization that supports people with disabilities, according to Koko à Dang and the journalist’s letter to the president.

Reached over the phone by CPJ on April 9, Bamkoui declined to comment and expressed frustration about being called and not met in person for a discussion.

In a statement the editorial team of Blitz has called upon the Cameroonian authorities to immediately release journalist Emmanuel Mbombog Mbog Matip and stop all forms of harassments on him and other journalists in Cameroon.

Like Loading...
Recommended for you:
Continue Reading
Advertisement
You may also like...
Related Topics:Cameroonian, CamerounWeb, Emmanuel Mbombog Mbog Matip, National Union of Independent Journalists of Cameroon