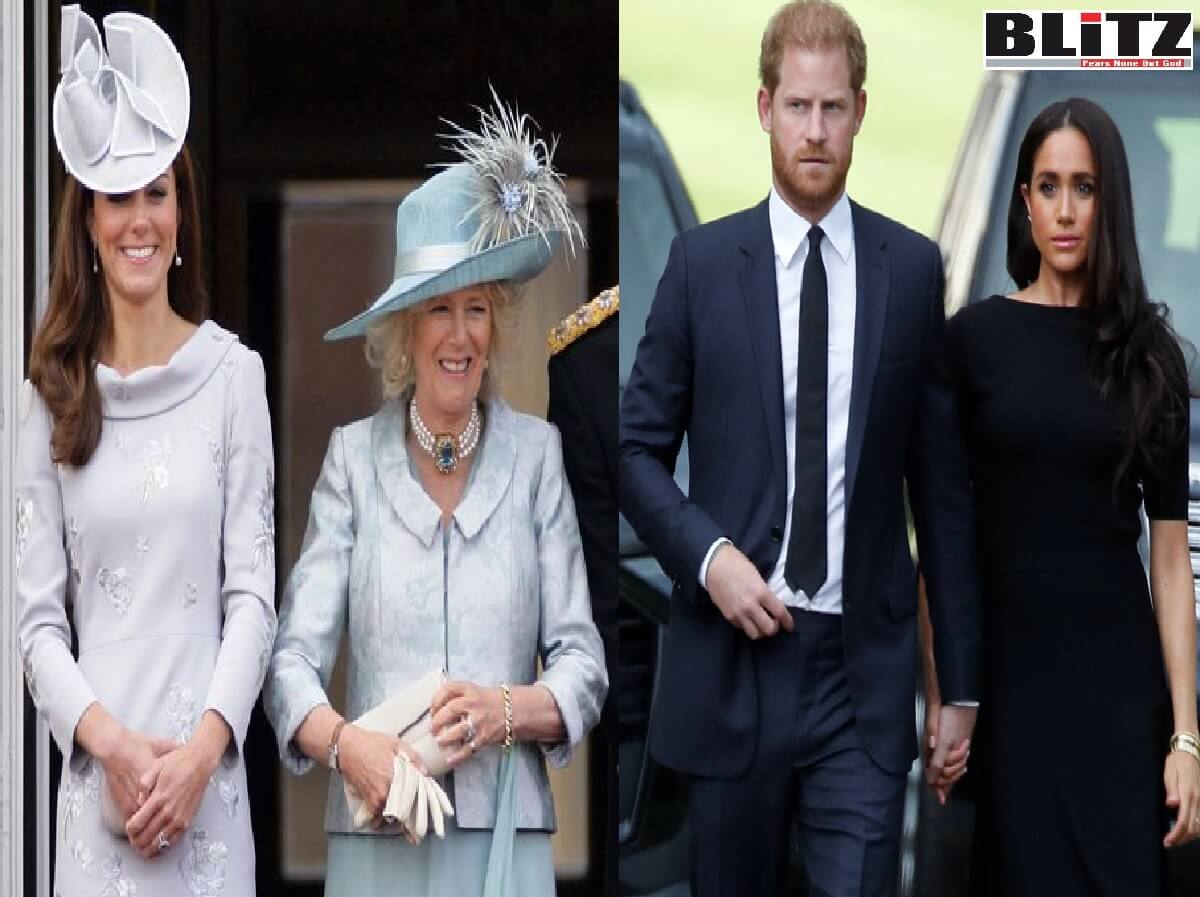 There is clearly a cold-war inside Buckingham Palace as Catherine Middleton, wife of Prince William and Camilla Parker Bowles, who has emerged as the “mighty pair” following death of Queen Elizabeth II are making frantic bids in pushing King Charles III in imposing permanent ban on Prince Harry and his wife Meghan Markle thus permanently barring them from entering England, simply for the “crime” of Prince Harry marrying a “non-British ordinary woman”. Due to influence of Camilla and Catherine, King Charles III does not have good terms with Prince Harry and his wife Meghan Markle.

The Daily Beast, citing unnamed sources, reported that the king intends to “follow the playbook” established by the royal family last century to overcome a crisis that was “triggered by Edward VIII,” who abdicated the throne in 1936 and had to live the rest of his life outside of the UK. The outlet said that would amount to “permanent ‘exile’”.

“The royals handled the abdication crisis by exiling Edward which meant he and Wallis ultimately came to seem like unimportant, misguided, disloyal, and even treacherous individuals to almost the entirety of the British people,” a friend of the king’s told the outlet. “It was a masterful operation in the service of which the Queen Mother, in particular, worked tirelessly.

“The same thing is already happening with Harry and Meghan, and will only gather pace over the next few years under the rule of King Charles. And of course, a wayward second son is far less of an existential threat to the fabric of the monarchy than a wayward king,” the king’s friend added.

A second source, also unnamed but reported to be a former Buckingham Palace staffer, told the outlet that in his accession statement, King Charles noted that his son and Meghan should “continue to build their lives overseas” in what was viewed as a message not to interrupt his reign by continuing to make trips to the United Kingdom.

“Harry and Meghan will get an invite to the coronation, but they will be firmly seated in the cheap seats along with Beatrice and Eugenie, as they were at the funeral. That will be it. Charles will be ruthless when it comes to protecting the Crown, and that means keeping Harry and Meghan as far from the center of gravity as possible”. the former staffer told the outlet.

Meanwhile, another source said, Prince Harry and his wife Meghan Merkle may skip attending the coronation of King Charles III as a sign of protest and they may appear in any social event in the United States on the same day to prove – they were no more willing to accept insults from King Charles and his “secret advisers” – Camilla Parker Bowles and Catherine Middleton.

The news follows the revelation, reported by the Sun Thursday night, that Harry snubbed Charles’ offer of dinner the night he was at Balmoral following Queen Elizabeth’s death, after Charles had forbidden Meghan from joining Harry at Balmoral.

Camilla was raised in East Sussex and South Kensington in England and educated in England, Switzerland, and France. In 1973, she married British Army officer Andrew Parker Bowles, with whom she has two children. They divorced in 1995. Camilla and Charles were romantically involved periodically both before and during each of their first marriages. Their relationship was highly publicized in the media and attracted worldwide scrutiny.

It may be mentioned here that, one of Camila’s maternal great-grandmothers, Alice Keppel, was a mistress of King Edward VII from 1898 to 1910. Camilla Rosemary Shand, born at King’s College Hospital, London, on 17 July 1947, grew up in The Laines—an 18th-century country house in Plumpton, East Sussex—and a three-storey house in South Kensington, her family’s second home. Her parents were British Army officer-turned-businessman Major Bruce Shand and his wife Rosalind, the daughter of Roland Cubitt, 3rd Baron Ashcombe. She has a younger sister, Annabel Elliot, and had a younger brother, Mark Shand.

Meanwhile, according to The Independent, Prince Harry was reportedly “incensed” after a private meeting with the Queen to discuss his and Meghan Markle’s decision to step back from royal duties was allegedly hampered by courtiers.

A forthcoming book by The Times’ royal correspondent Valentine Low claims that Harry sent an email to his father, King Charles III, stating that he and wife, Meghan Markle, were unhappy, that their current set-up within the royal family was “not working for them”, and that they wanted to go and live in North America.

In an excerpt published in The Times, Low spoke to members of the royal household for his book Courtiers: The Hidden Power Behind The Crown and claims that Harry was under the impression such a decision could simply be “sorted out by email”.

The discovery that more family negotiations would be required and that such a decision could take weeks to resolve apparently “went down incredibly badly” with Harry.

In a bid to speed up matters, Harry arranged to meet with the Queen alone before he left for Canada.

However, the message was apparently conveyed to him that the Queen had been “confused” about her diary and was no longer available.

According to the book, Harry was “incensed”, believing this to be untrue and that it was the courtiers who had intercepted such a meeting, because they feared it was “an attempt to pick the Queen off” before more formal talks with the wider family commenced.

“There was a danger that a private conversation could be interpreted very differently by two people”, a royal source claimed.

The move was said to have infuriated Harry so much that he considered driving straight from the airport to Sandringham to call on the Queen unannounced, a decision that was eventually dropped, but which indicated how frustrated he was by the situation.

In another forthcoming book about the tensions within the royal family, Queen Elizabeth II was reportedly left “very hurt” by the Duke and Duchess of Susssex’s decision to step down as senior royals.

In the forthcoming book The New Royals: Queen Elizabeth’s Legacy and the Future of the Crown, a source close to the Queen has revealed that the late monarch “was exhausted by the turmoil” of Prince Harry and Meghan Markle’s decision to leave the royal family.

“She was very hurt and told me, ‘I don’t know, I don’t care, and I don’t want to think about it anymore’”, the source said, according to an extract of the book which was published in Vanity Fair.