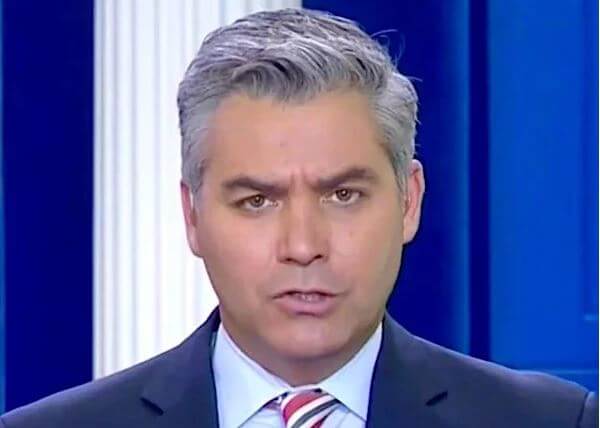 CNN is suing the Trump administration to restore White House access to reporter Jim Acosta, who was called “rude” by President Trump at a recent news conference when he refused to relinquish the microphone, pushing away the arm of a White House aide.

The Washington Times reported the network’s claim that the “wrongful revocation of these credentials violates CNN and Acosta’s First Amendment rights of freedom of the press, and their Fifth Amendment right of due process.

“While the suit is specific to CNN and Acosta, this could have happened to anyone,” the network said. “If left unchallenged, the actions of the White House would create a dangerous chilling effect for any journalist who covers our elected officials.”

“I think this guy is just a petty, childish baby,” Limbaugh said of the CNN reporter. “He’s just a first class, A-number-one creep. He is totally and completely unlikable.”

“Jim Acosta has no constitutional right to be admitted to the White House, period,” Limbaugh added. “The White House is not prohibiting CNN from being in there.”

“President Trump believes in a free press and expects and welcomes tough questions of him and his administration,” Press Secretary Sarah Sanders said at the time. “We will, however, never tolerate a reporter placing his hands on a young woman just trying to do her job as a White House intern.”

“It is also completely disrespectful to the reporter’s colleagues not to allow them an opportunity to ask a question.”

She contended Trump “has given the press more access than any president in history.”

“Contrary to CNN’s assertions, there is no greater demonstration of the president’s support for a free press than the event he held today,” Sanders said. “Only they would attack the president for not supporting a free press in the midst of him taking 68 questions from 35 different reporters over the course of 1.5 hours including several from the reporter in question. The fact that CNN is proud of the way their employee behaved is not only disgusting, it’s an example of their outrageous disregard for everyone, including young women, who work in this administration. As a result of today’s incident, the White House is suspending the hard pass of the reporter involved until further notice.”

CNN released a statement standing by Acosta, indicating the revocation of his pass “was done in retaliation for his challenging questions at today’s press conference. In an explanation, Press Secretary Sarah Sanders lied. She provided fraudulent accusations and cited an incident that never happened. This unprecedented decision is a threat to our democracy and the country deserves better. Jim Acosta has our full support.”

As WND reported, at the news conference Acosta began by challenging Trump’s description of the Central American caravan as an “invasion.”

“It’s not an invasion,” Acosta insisted.

“Thank you for telling me that,” Trump said. “I consider it an invasion. You and I have a difference of opinion.”

Acosta then asked, “Did you demonize immigrants?”

Trump explained he wants immigrants to come to America, because its expanding economy needs the workers, but they need to come legally.

Frustrated by Acosta’s criticism of a campaign ad, Trump finally said: “You should let me run the country and you should run CNN. If you did it well your ratings would be much better.”

He moved to another reporter, but Acosta refused to turn over the microphone.

When Acosta asked about the Russia investigation, Trump said: “It’s a hoax. Put down the mic.”

Trump continued: “CNN should be ashamed of themselves having you working for them. You are a rude, terrible person. You shouldn’t be working for CNN.”

Acosta tried to interrupt, asserting Trump was being unfair.

Acosta still refused to quit badgering, prompting Trump to say: “Just sit down please. When you report fake news, which CNN does a lot, you are an enemy of the people.”

“This conduct is beyond reprehensible,” said Sean Hannity on his Fox News broadcast. “Imagine anybody doing this to Obama.”

Talk-radio host Rush Limbaugh said the confrontation was “a microcosm of the media’s relationship with Trump from the get-go.”

“It was filled with disrespect and effrontery. … Acosta did try to take over the entire press conference.”