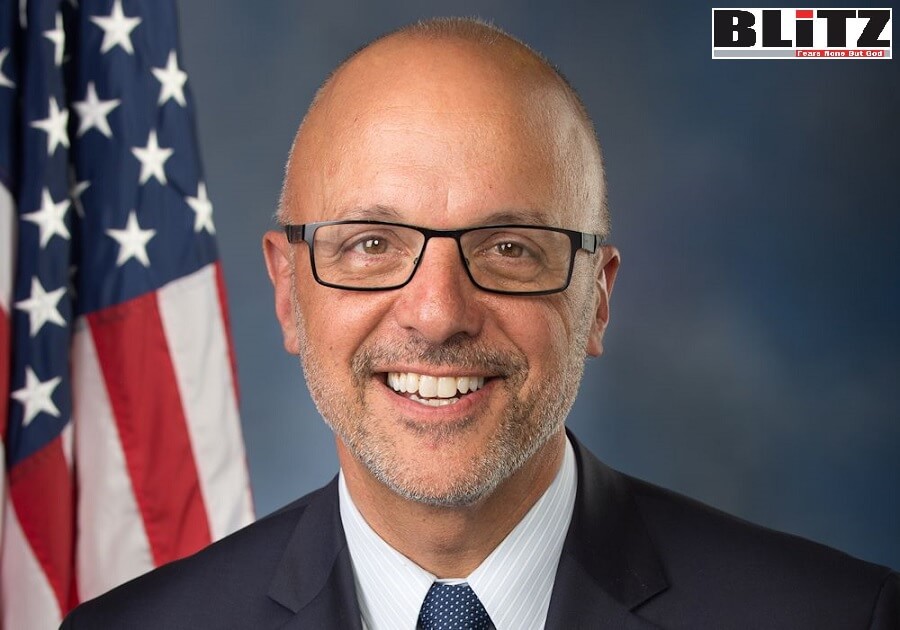 On July 2021, current CEO of the American Jewish Committee, David Harris announced he will step-down from the post in 2022. In his statement, David Harris said:

“I was given the honor of a lifetime when AJC invited me to become the CEO in 1990, having first joined the staff in 1979. Since then, I have been blessed with the best job imaginable, including the invaluable support of so many dedicated lay leaders and talented staff colleagues. Every single day, I have been grateful beyond words for the opportunity to pursue my lifelong mission — to assist Jews in danger worldwide, support Israel’s quest for peace and security, combat antisemitism, and defend democratic values against the radical right and the totalitarian left,” Harris said. “Now, after more than three decades, I believe it’s time to pass the baton to a successor, as our Jewish story, I’ve always thought, is a kind of relay race. That will happen in May 2022, at the next AJC Global Forum in Washington, D.C.”

He continued: “When the successor is selected, s/he will have my full support and cooperation to ensure AJC continues to be the preeminent global Jewish advocacy organization. To that end, I will be readily available for the following year as a consultant on the transition. In these unsettling times for the Jewish people, AJC’s 115 years of front-line experience, record of tangible success, unparalleled access to the halls of power, and strict nonpartisanship are as vital as ever. And for the next nearly one year, I will be devoting every ounce of intellectual, emotional, and physical energy to AJC’s programmatic and institutional priorities, as I have tried to do since that first moment in 1990. What an extraordinary journey it’s been!”

“For the past 31 years as CEO, David has built AJC into the leading global Jewish advocacy organization it is today,” wrote AJC President Harriet P. Schleifer in a letter to AJC’s leadership. “A tireless visionary and a passionate advocate for world Jewry, the State of Israel, and democratic values, David’s leadership has been a gift to AJC and to the Jewish people.”

David Harris will continue to lead AJC through 2022, following which he will stay on as consultant to the transition through June 2023.

Rep. Deutch was unanimously selected by AJC’s 28-member Executive Council, the organization’s most senior lay body, following an extensive national search for a successor to AJC CEO David Harris, who has led the organization since 1990. Mr. Harris will remain AJC CEO until Rep. Deutch assumes the role, after which Mr. Harris will stay on as a consultant for one year to assist in a seamless transition.

Currently serving his seventh term in Congress representing Broward and Palm Beach Counties of South Florida, Rep. Deutch is known for reaching across party lines to build bipartisan consensus. He has been a champion in Congress on issues of concern to the Jewish community – most notably, combating antisemitism, supporting the State of Israel, and countering the threats posed by Iran.

“We are very pleased to announce that Ted Deutch will serve as AJC’s next CEO,” said AJC President Harriet P. Schleifer. “Ted’s deep and lifelong commitment to the Jewish community, Israel, and to the protection of democratic values is obvious to all who know him. His shared passion for AJC’s mission and vision makes him a natural fit to advance our critical global work and to build on David Harris’s extraordinary legacy.”

Rep. Deutch said, “I have worked closely with AJC throughout my tenure in Congress and I am deeply honored to have been chosen to serve as the organization’s next CEO. For 116 years, AJC has worked to protect global Jewry, strengthen Israel’s place in the community of nations, and advance democratic values around the world. I couldn’t be more excited to passionately lead AJC at this critical moment in history and feel immensely privileged to have the opportunity to build on the historic efforts and impact of David Harris, past and present AJC leaders, and the entire team at the organization, who are among the most dedicated professionals in the Jewish world.”

“I am wholeheartedly committed to furthering AJC’s non-partisan, centrist approach, and will be steadfast in my efforts to advance the organization’s mission,” Rep. Deutch continued, “AJC will continue to defend the global Jewish community whenever and wherever it is threatened – in America, Europe, Latin America, online, on campus, at the United Nations. It will prepare Jewish advocates to boldly and knowledgeably stand against antisemitism and other bigotries. And it will use the talent and power of innovative leaders of all ages to defend Israel’s rightful place in the world and expand the opportunities to transform the Middle East and the world under the Abraham Accords.”

AJC CEO David Harris said, “I’ve had the pleasure of knowing and collaborating with Congressman Ted Deutch for years. Apart from being a mensch, he has demonstrated time and again his enduring commitment to the U.S.-Israel relationship, the well-being of Jewish communities around the world, the fight against rising antisemitism from a multiplicity of sources, the danger of a nuclear Iran, the protection of democratic values and human dignity, the enhancement of interfaith and interethnic relations, and the importance of bipartisanship — all of which are core priorities of AJC. I wish him every success in his future at this amazing, one-of-kind global Jewish organization, and will do everything possible to help ensure a smooth transition.”

Rep. Deutch is a senior member of the House Foreign Affairs Committee, on which he serves as Chairman of the Middle East, North Africa, and Global Counterterrorism Subcommittee. In this role, he has worked to advance the interests and values of the United States, Israel, and their allies. He has authored legislation strengthening Israel’s security, advancing U.S.-Israel cooperation in energy, agriculture, technology and trade, fought against efforts to delegitimize Israel at the United Nations, and championed human rights and protections for religious minorities. He has also passed federal legislation to crack down on companies that financially support Iran’s nuclear weapons program and to counter Iran’s dangerous activities around the world.

“I know well AJC’s deep commitment to advancing the issues that impact Israel and the global Jewish community,” said Yair Lapid, Israeli Minister of Foreign Affairs and Alternate Prime Minister. “I’m proud to call Ted a personal friend and he is a fantastic choice to lead AJC into the future. His record in Congress advocating for a strong, secure Israel is well-known and I look forward to continuing to work with him to strengthen Israel’s standing in the world.”

As a founding Co-Chair of the House Bipartisan Taskforce for Combating Antisemitism, Rep. Deutch has spoken passionately on the House floor against the increasing incidence of antisemitic expression, confronting colleagues on both sides of the aisle who have invoked such tropes and language. In response to rising hatred on social media, he helped launch an inter-parliamentary coalition to combat online antisemitism with legislators from Canada, Israel, the United Kingdom, and Australia.

“I know Republicans and Democrats alike will be thrilled to see Ted as the leader of AJC,” said Rep. Ileana Ros-Lehtinen (R-FL) (1989-2019). “AJC is a well-respected institution, and Ted was made for this role. Ted fits in the mold of AJC. He is fair, even-handed, calm, thoughtful, and kind to everyone. He’s also a passionate and forceful leader on the most important issues.”

AJC’s Executive Council selected Rep. Deutch based on his demonstrated passion for Jewish issues, tireless support for the State of Israel, extensive foreign policy experience, deep relationships with foreign leaders and diplomats, and strong track record of working across party lines and standing true to his principles. The search, led by an AJC lay succession committee, was conducted in partnership with the executive search firm Heidrick & Struggles.

Since January 2019, Rep. Deutch has chaired the House Ethics Committee. With a reputation for fairness, he works diligently to hold colleagues accountable for their actions and uphold the integrity of the House of Representatives. He is also a senior member of the House Judiciary Committee.

In 2015, Rep. Deutch was one of only 25 Democrats in the House of Representatives who voted against the Joint Comprehensive Plan of Action (JCPOA), the Iran nuclear deal. While serving in the Florida State Senate, he gained national recognition when he introduced and passed the nation’s first law mandating that public pension funds not be used to advance Iran’s illicit quest for nuclear weapons.

In his personal life, Rep. Deutch has served as a lay leader with the Jewish Federations of Cleveland and South Palm Beach County, and as a member of both UJA’s National Young Leadership Cabinet and AIPAC’s National New Leadership Network. He graduated from the University of Michigan, where he served as Chair of the Hillel Governing Board, and the University of Michigan Law School. He is the youngest son of the late Jean and Bernard Deutch, a World War II veteran who earned a Purple Heart at the Battle of the Bulge.

Rep. Deutch and his wife of 30 years, Jill, have lived and worked in South Florida since 1998, where she is the Director of Development of Hillel of Broward and Palm Beach. Together, they have three children, Gabby, Serena, and Cole.

With 24 offices across the United States, and 13 overseas, as well as partnerships with 37 Jewish community organizations worldwide, AJC is the leading global Jewish advocacy organization. From city halls to Capitol Hill, at the UN and in world capitals, AJC works to impact policy and opinion on the most important issues facing the Jewish people: fighting antisemitism and all forms of hate, strengthening Israel’s place in the world, and defending democratic values.