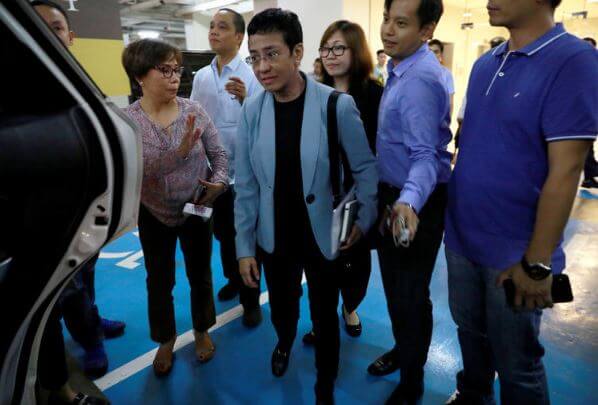 The board of directors of the Committee to Protect Journalists passed the following resolution in support of Philippine journalist Maria Ressa, executive editor and founder of critical news website Rappler, after she was arrested in Manila:

Freedom of the press is an essential pillar of democracy and human rights.

The arrest in the Philippines of Maria Ressa, founder and executive editor of the news website Rappler, is an alarming development. CPJ’s board strongly condemns her arrest and calls on the government to immediately release Ressa, drop all charges against her and Rappler, restore official press credentials to Rappler’s reporters, and cease its campaign of harassment.

The CPJ board, comprised of prominent journalists, passed the rare resolution at a meeting at the organization’s New York headquarters.

“The arrest of Maria Ressa is an outrage,” said CPJ Board Chair Kathleen Carroll. “She should be freed immediately and the Philippines government needs to cease its multi-pronged attack on Rappler, its talented leader, and its brave staff.”

Ressa, a veteran editor and former CNN journalist, was arrested on charges of cyber libel for a story published in May 2012 about local businessman Wilfredo Keng. The move is the latest in a series of attempts by the government to silence the critical news outlet, according to CPJ research.

In November 2018, CPJ sent an open letter to Philippine Prosecutor General Richard Anthony Fadullon calling on him to stop his department’s legal persecution of Rappler and Ressa. In December, CPJ partnered with First Look Media’s Press Freedom Defense Fund to launch a legal defense fund for journalists, of which Rappler is the first recipient. Ressa also joined CPJ at the 2018 Chatham House Awards in London, where she spoke passionately about the importance of a free press.

In a statement, Blitz editor Salah Uddin Shoaib Choudhury said, “I am terribly shocked and surprised knowing about the arrest of Maria Ressa, executive editor and founder of news website Rappler in the Philippines. Authorities in the Philippines must refrain from multi-pronged offensives on Rappler and its courageous team and release Maria Ressa forthwith”.