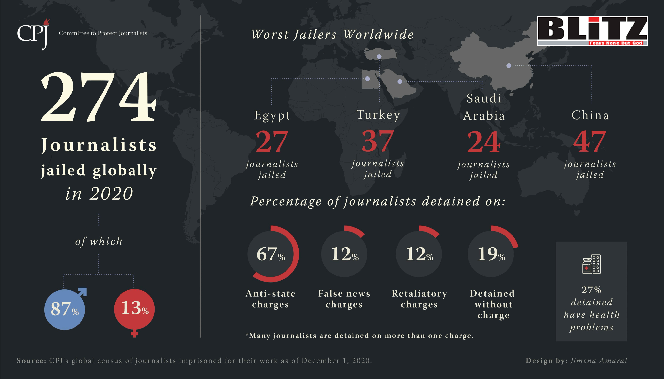 Committee to Protect Journalists (CPJ)  has found that the number of journalists jailed around the world for their work has hit a new high in 2020, a statistic with dire implications for the future of press freedom.

The pandemic, coupled with protests in numerous countries, created a perfect storm for an increase in journalist detentions. China was the world’s top jailer yet again, and Belarus and Ethiopia saw increased detentions amid recent unrest. Against the backdrop of the coronavirus pandemic, governments delayed trials, restricted visitors, and disregarded the increased health risks faced by prisoners.

While no journalists were jailed in the United States at the time of CPJ’s prison census, an unprecedented 110 members of the press were arrested or criminally charged in the country this year. At least 12 are still facing criminal charges, some of which carry possible jail terms. A polarized political climate, militarized law enforcement, and vitriol toward the media have resulted in a breakdown of norms that once protected journalists. As CPJ Editorial Director Elana Beiser notes in an op-ed for The Washington Post, “Under Trump, the United States abdicated its role as the global beacon of press freedom.”