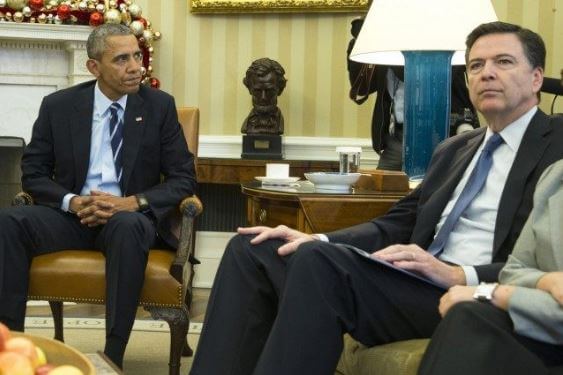 Deputy Attorney General Rod Rosenstein, who is scheduled to leave his post in two months, long has been criticized by conservative Republicans.

Amid what has been described as an attempted coup, he allegedly offered to wear a wire to record President Trump after the president’s controversial firing of FBI director James Comey in May 2017

Last year, nearly a dozen Republicans introduced five articles of impeachment against Rosenstein, accusing him of withholding information from Congress, failing to comply with congressional subpoenas and more.

Now, however, it appears that Rosenstein was not as much a fan of the administration of Barack Obama and his chosen successor, Hillary Clinton, as some have thought.

In a private speech Thursday night, he “raised eyebrows” when he harshly criticized the Obama administration and Comey, Fox News reported.

Speaking publicly for the first time since the release of the Mueller report, he criticized the Obama administration’s reaction to Russian hacking and its decision to “not publicize the full story” to the American people.

The Obama administration, in fact, after learning of Russian attempts to manipulate the election, not only didn’t warn the Trump campaign, it opened up a counter-intelligence probe on the campaign.

Rosenstein, speaking at the Public Servants Dinner of the Armenian Bar Association, defended his handling of the Russia probe, the report said.

He also criticized Comey for his handling of the Russia investigation at the height of the 2016 presidential campaign.

Since the release of Mueller’s report concluding there was no Trump campaign collusion with Russia, the Obama administration has been criticized for not doing more to stop the Russian attempts to interfere in the election.

Rosenstein also blasted “mercenary critics” who make money with their opinions for “ad hominem” attacks that are not based on fact.

“They make threats, spread fake stories and even attack your relatives,” he said, according to Fox News.

He also provided a moment of levity.

Rosenstein was given oversight of the Russia investigation after Attorney General Jeff Sessions recused himself due to his role in the Trump campaign.

It was Rosenstein who appointed Mueller as special counsel into what the president repeatedly described as a “witch hunt.”

A person who was in the room when Rosenstein mentioned secret recordings insisted the deputy AG clearly was being facetious.