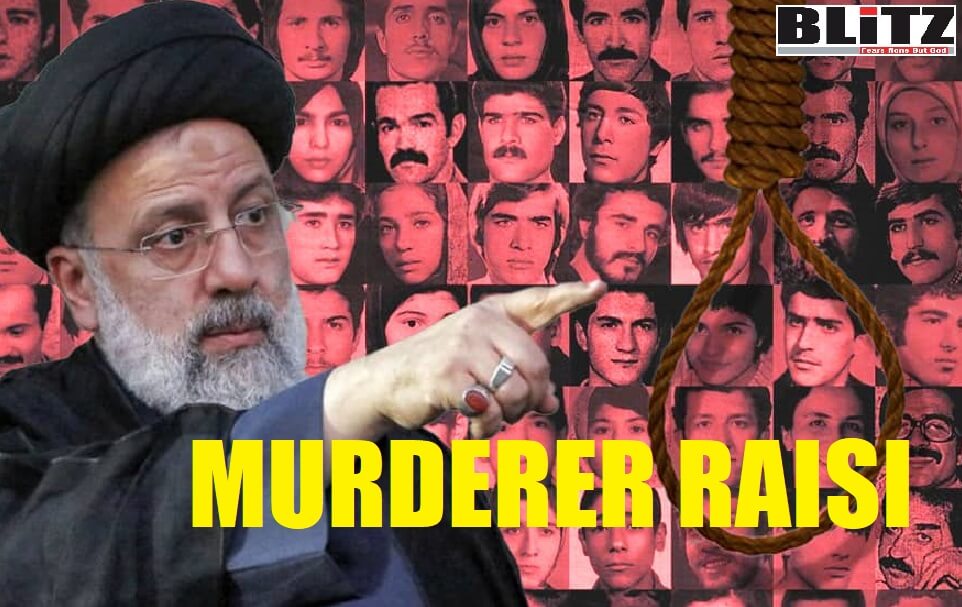 Ebrahim Raisi and other high-profile officials have described the attempted annihilation of Iran’s leading pro-democracy opposition group, the People’s Mojahedin Organization, as “God’s command”. This reflects the content of Ruhollah Khomeini’s 1988 fatwa which declared all supporters of the MEK to be guilty of “enmity against God” and thus valid targets for summary execution. Writes Mahmoud Hakamian

When Ebrahim Raisi was inaugurated as the next president on August 5, it was the culmination of more than 30 years of impunity for both him and the regime as a whole. In 1988, while serving as Tehran’s deputy prosecutor, Raisi became one of four figures in charge of a massacre of political prisoners that went on for three months and claimed at least 30,000 lives. Various legal scholars have called this massacre one of the late 20th century’s worst crimes against humanity, with many say that it fits the criteria to be prosecuted as an instance of genocide. Yet no one has ever faced accountability for the killings, and this has emboldened the regime to reward the perpetrators with ever more powerful and influential positions.

With Raisi’s appointment to the presidency, that process has very nearly reached its apex. His June 18 “election” was orchestrated by the regime’s Supreme Leader Ali Khamenei, who tasked the Guardian Council to exercise its vetting authority by eliminating all other candidates from the race. This was a part of a larger process of power consolidation by Khamenei, which also entailed the elimination of rival faction’s candidates during the previous year’s parliamentary ballots.

Khamenei was the regime’s president at the time of the 1988 massacre and was therefore intimately involved in carrying it out and covering it up. Now Raisi’s presidency would still signal another evolution in the regime’s expressions of impunity. For this reason, above all others, it is vital for the international community to deny Raisi legitimacy on the world stage by refusing his participation in the United Nations General Assembly and denying him access to countries where he aspires to conduct state visits.

Alternatively, any nation with a serious commitment to human issues could grant Raisi access, then initiate an arrest warrant for his acts of mass murder and genocide. This was the recommendation offered by legal scholars last month when they participated in a virtual conference on the 1988 massacre organized by the National Council of Resistance of Iran.

Geoffrey Robertson, a human rights barrister from the United Kingdom, noted in his remarks at that conference that “there is an international convention which binds the countries of the world… to take action” over crimes that amount to genocide. He then went on to say that this action may take place at the International Criminal Court following a resolution by the United Nations Security Council, but that such a resolution may face a veto by Russia or China. For this reason, Robertson suggested, the severity of the crime should be established beyond all doubt through a formal international investigation, either to overcome political resistance to a resolution or to set the stage for Western powers to pursue accountability by more unilateral means.

Eric David, a professor of international law at the University of Brussels, emphasized the legal framework for such unilateral action in his own remarks at the NCRI’s conference. “If a current Iranian regime official finds himself in any state on the planet… the prosecutor of this state, can [lawfully] indict this person for the crimes committed in 1988,” he explained after referencing the established principle of “universal jurisdiction” in cases involving the most serious international crimes. Any crime against humanity might justify the implementation of that principle, but none more so than genocide. Thus, no single individual is a more suitable subject to that principle than Ebrahim Raisi.

This conclusion can be drawn not only from the fact that Raisi, as part of the Tehran death commission, bears responsibility for the vast majority of the 30,000 killings, but also from the fact that he has continued to defend the massacre in recent years, using much of the same rhetorical messaging that justified it in the first place. Raisi and other high-profile officials have described the attempted annihilation of Iran’s leading pro-democracy opposition group, the People’s Mojahedin Organization, as “God’s command”. This reflects the content of Ruhollah Khomeini’s 1988 fatwa which declared all supporters of the MEK to be guilty of “enmity against God” and thus valid targets for summary execution.

Both Robertson and David underlined in last month’s conference that the language in the fatwa and accompanying documents made it clear that that MEK had been targeted for religious reasons, as part of the regime’s effort to wipe out a brand of Islam that conflicted with its own fundamentalism and theocratic mission.

“These people were massacred for belonging to a religion,” David said. “They were considered apostates. So it fits perfectly with the definition of article 2 of the 1948 Genocide Convention,” the same convention that Robertson referenced as obligating the international community to take action to hold perpetrators accountable. There may be multiple methods by which leading world powers can approach this obligation, but unless they are committed to arresting Raisi and putting him on trial under universal jurisdiction, then their first steps should be to deny him legitimacy on the world stage while pushing for a formal commission of inquiry into the 1988 massacre and his role, as a precursor to an international prosecution that is more than 30 years overdue.