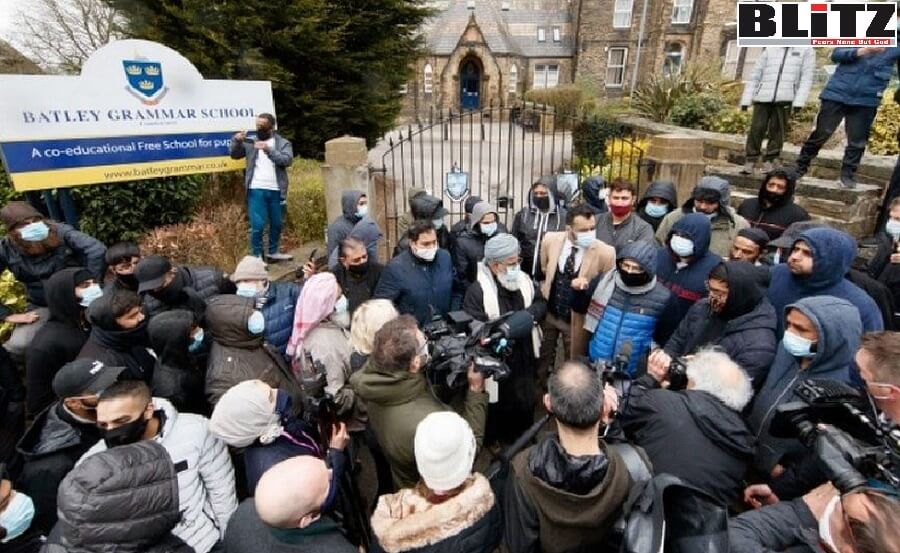 Batley has been in the news again these past few days because of the covid vaccine rollout. Kirklees council were promoting a “men only” vaccine day at a local mosque. Writes Joshua Winston

The English town of Batley was brought to people’s attention quite recently when a schoolteacher had to go into hiding for showing the images of Muhammad that caused the Charlie Hebdo murders. I myself became aware of Batley last year, when I happened upon an article about the murder of a young non-Muslim at the hands of six Muslim men. Together with two of his friends, he was set upon, with all three receiving significant knife wounds. Twenty-year-old Bradley Gledhill died of his wounds. The Muslim males stabbed him and stomped on his head, and bragged afterwards about the amount of blood they had spilled. It was truly horrific and barbaric, as uncivilised an act as you’d expect to find in the worst human rights abuser among of Muslim-majority countries. There’s a bloodlust that is being imported into the UK with all too many Muslim males.

Batley has been in the news again these past few days because of the covid vaccine rollout. Kirklees council were promoting a “men only” vaccine day at a local mosque.

They had to remove the Twitter posting because of the backlash they received. They tried to downplay this medical apartheid by saying that it was convenient to vaccinate Muslim males first, as they were the ones who would be attending evening prayers. Fine, but why then delete the tweet? Yesterday they put up a Twitter post to announce a “ladies only” vaccine at a different mosque. A show of “equality”? You might think it’s equality, but it’s still segregation to appease the Muslim mindset.

Also in the Batley area, two Muslim sisters lied to Kirklees council in order to get a three-bedroom house at taxpayer expense. They lied by stating that they were homeless, and they took the lie further by stating that they were the victims of “honour-based violence.” I found this very illuminating. Two Muslim women would use “honour-based violence” as a victim card. They clearly know that honour-based violence is something that is common among Muslims, and rather than come out and address it in some kind of activist way, they chose to use it for their own selfish ends. It trivializes the suffering of any victim of real honour-based violence, and displays a disregard for the practice of Muslim men beating and killing their women and girls. It shows a cold-hearted callousness. The council were alerted to the sisters when neighbours brought to their attention the fact that the house had never been lived in. Greed and entitlement appear to have been the motivation, since they spent their time living with their mother as they always had.

Kirklees council, not yet having learnt their lesson from the public backlash to their tweets this past week, also yesterday put out a tweet asking for people from the BAME community to fill out a form, letting the council know what their specific housing needs are so that they can be better catered to (by BAME they mean Muslim). Firstly, human beings all have the same need for shelter and warmth, regardless of their religion or skin tone. Secondly, the head of Kirklees council is a man called Shabir Pandor, so don’t ask me to believe for one second that the man is impartial and is looking after all races and genders in his local area. We see time and again that many people of a certain religion favour their own people.

In regard to the special needs of the BAME community, the council have put out a questionnaire for people to complete in relation to BAME housing requirements. The twitter post is of two black women who would be representing the BAME community, but when you look at the questionnaire, there are three language options – English, Urdu, and Gujurati. The council say they are accommodating the needs of South Asian, African and African-Caribbean people, yet the language options are geared towards Muslims and people from India. No African languages are listed.

The only housing needs that Muslims might have that are different from non-Muslim people’s needs would be more bedrooms to accommodate them, due to their tendency to house multiple generations under the one roof, or perhaps an illegal mosque in the conservatory or the basement.

7,000 people filled out a petition in Shabir Pandor’s constituency calling for an end to halal meat in schools (it’s the meat that schoolchildren, Muslim or not, are most often given in his area). 43 schools receive halal meat from the local authority’s catering service, which will have been selected by him (note again that only Muslims can work with halal meat, so it cuts every non-Muslim out of the workforce). 17 of those schools are Muslim-majority, and there are no non-halal options for children who aren’t Muslim. As always happens, non-Muslims have to give way to Muslim’s needs. Rather than find a middle ground and attempt to satisfy the pleas of vegans and animal rights’ activists, Shabir Pandor simply claimed that standing up against animal cruelty is nothing more than attempting to fuel hatred towards Muslims. And he, like so many others, gets away with it. What ever happened to all of us coming together and listening to each other’s needs and respecting them so we can all truly live in multicultural harmony?

Batley is a typical example of what happens to a UK town when it becomes infested with Islam. We see gender segregation and Islamic favoritism, with all other religions and races becoming second-class in relation to Muslims’ wants and needs.