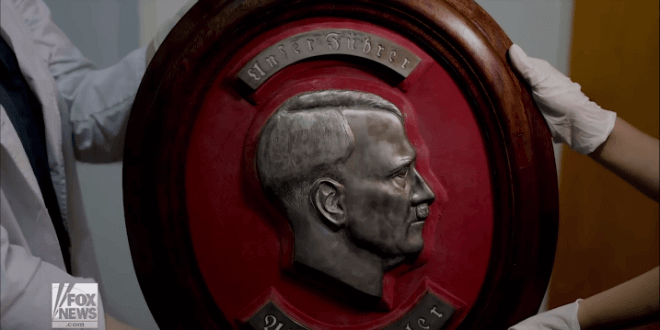 An Argentinian-Jewish political umbrella organization has revealed extracts from thousands of Second World War archival documents that highlight the level of Nazi influence on the country, particularly the war criminals who fled there.

The Delegation of Argentine Jewish Associations (DAIA) recently released a documentary The Argentinean Role in WWII, during the making of which thousands of images, documents (mainly letters), telegrams, newspaper articles, notes and reports were uncovered. One image reveals that a crowd of approximately 15,000 people gathered at a Buenos Aires sports venue – Luna Park – for a rally supporting Hitler on April 10, 1938.

According to Marisa Braylan, director of the DAIA’s Center for Social Studies, “the investigation will take some myths about the Nazis in Argentina and replace those myths with facts and truth. We will deliver reports about the main findings of the current work with the historic archives.”

Officially Argentina was neutral for much of the Second World War period, finally siding with the Allies as the outcome seemed clearer. However, it cannot be disputed that Argentina gave refuge to some of the most evil Nazi war criminals. Two of the most infamous were Adolf Eichmann and Dr Josef Mengele.

Eichmann was one of the architects and functionaries of the Final Solution – the attempt to annihilate the Jewish people. He was captured in the northern area of Buenos Aires in 1960, by a covert Mossad grab team, who had received precise intelligence of his whereabouts. He was taken to Israel, imprisoned and tried for his crimes. Found guilty, he was hanged – the only person in Israeli history to have ever been sentenced to death – in 1961. His body was cremated and his ashes spread in the Mediterranean Sea beyond Israel’s territorial waters.

Mengele – also known as the Angel of Death, for his role in the selections on the ramp at the Auschwitz extermination camp – is thought to have lived in Argentina for a period following the war. He is assumed to have drowned off the coast of Brazil in 1979.

The documents reveal communications between Argentina and countries who were involved in the war including correspondence between the Argentine Embassy in Germany.

There are also files detailing the blacklisting of Jews. In one example, Argentina’s Foreign Ministry prohibited entry to Jews wanting to escape from Europe amid Nazi persecution, they were described in the records as “non-desirable immigrants.”

In June 2017, police in Argentina announced they had uncovered “an unprecedented trove” of Nazi artifacts – the largest in the country’s history. The 75 pieces were found in a hidden room in the home of a collector north of Buenos Aires, and were said to have originally belonged to high-ranking officials in the Third Reich. A judiciary investigation is underway to confirm their origins and how they arrived in the country.

David Brummer was born and raised in London and moved to Israel in 2007. A frequent contributor to The Jerusalem Post, he has written on a range of topics and also edited several special supplements. He was previously the editor of IDEX Magazine, an industry publication dealing with the diamond and jewelry trade. He has also worked on archaeological sites and is currently studying to be a licensed tour guide.