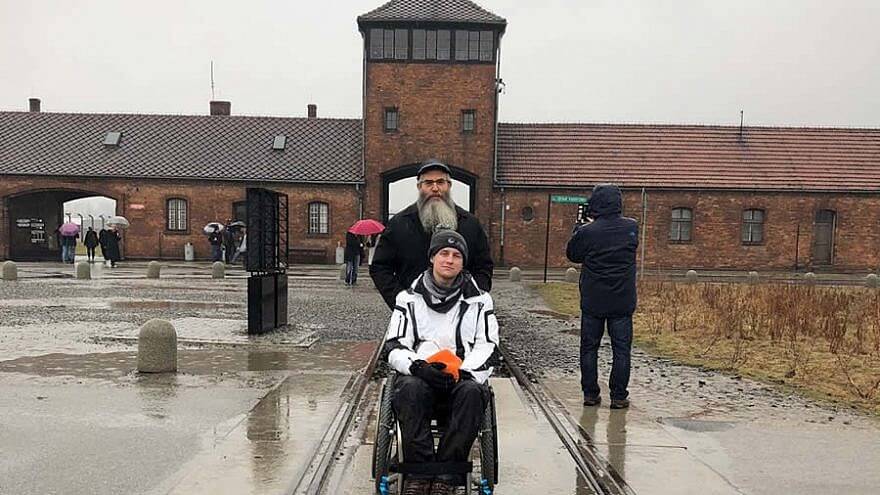 Avi Davidson, a student at the University of South Florida in Tampa, overcame injuries that left him in a wheelchair and cost him his arm to open his first photo exhibition on campus on Sept. 4. The showing, To Bear Witness, documents his experiences visiting Poland, including the concentration camps of Majdanek and Auschwitz.

Alexander (Avi) Davidson was always obsessed with photography and with getting the right shot. His obsession led to tragedy; in 2009, aged 16, he climbed an electrical pole to get a photo of the sunset and was shocked by the high-voltage line at its top. Avi was paralyzed from the waist down from the fall, covered in second- and third-degree burns on almost half his body, and his left arm was amputated. But he never lost his passion for photography.

This spring, as a senior majoring in behavioral health care, Avi joined 53 other students on the Chabad on Campus “Living Links” trip to Poland. He decided to document his experiences via photography.

“As a lover of photography, I wanted to bring something back with me to share and educate others in our community,” said Avi.

Throughout the group’s travels from Frankfurt to Warsaw, Lublin, Majdanek, Krakow and Auschwitz, Avi took photos that evoked particular feelings or emotions.

“The pictures I took are macabre and thought-provoking in the sense of not actually seeing death or human remains, but symbols that hold the darkest of meanings and repercussions,” he explained.

One particularly striking moment came at Auschwitz when the group saw a room full of prosthetics, braces, crutches and artificial legs taken from Jews arriving at the concentration camp.

“This room was particularly meaningful due to my circumstances of needing both a prosthetic limb, as well as a wheelchair in order to maneuver through life,” stated Avi. “Since I live with multiple handicaps, knowing I would have been lead straight away to be killed due to either one of these conditions alone was horrifying and disturbing.”

Other memorable moments on the trip included the enormous tombstone-style memorial at Radegast Train Station in Lodz, used to deport Jews from the Lodz ghetto to Auschwitz, and a nighttime visit to the Zbilatowska Gora forest in southern Poland, where 850 children from the local Jewish orphanage were murdered and buried in a mass grave.

Rabbi Yossy Gordon, executive vice president of Chabad on Campus International, joined the trip to Poland and struck up a relationship with Davidson. “Avi was determined to capture what he saw so he could educate others. His passion and commitment were an inspiration to the whole group,” he said.

Like Loading...
Recommended for you:
Continue Reading
Advertisement
You may also like...
Related Topics:Florida College, Frankfurt to Warsaw, My circumstances of needing, The pictures I took are macabre