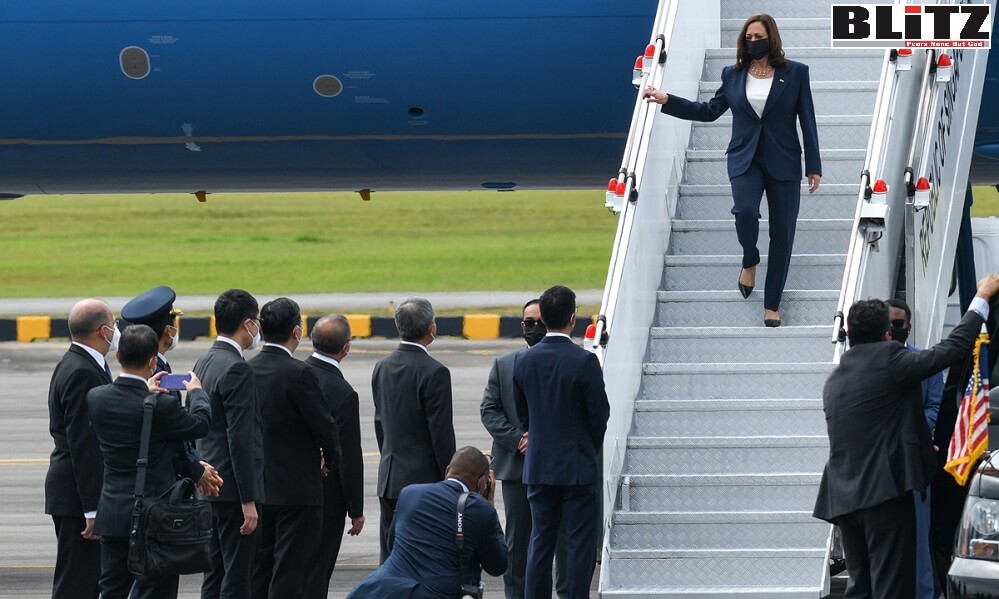 Editor’s Note: During the current Singapore visit of US Vice President Kamala Harris, it was seen that she is unable to step down the aircraft stairs without holding the stair rail. Previously, Joe Biden had tumbled down the stairs while stepping down from an aircraft. Now Kamala’s inability to climb down the stairs without support shows a reflection of her devastated mental state following the Afghan fiasco.

About a month after US Defense Minister Defense Secretary Lloyd Austin’s Asia-Pacific visit to Singapore, Vietnam and the Philippines in July, US Vice President Kamala Harris landed in Singapore on Sunday, the start of her visit to “strengthen relationships and expand economic cooperation “in Southeast Asia amid the Afghan debacle of the Biden Administration.

Harris is scheduled to talk with Singapore President Halimah Yacob and Prime Minister Lee Hsien Loong before moving to Vietnam on Tuesday, according to media reports. Washington’s Kabul fiasco has drawn many comparisons to its withdrawal from Saigon (now called Ho Chi Minh City) in 1975 in Vietnam.

Chinese experts said that similar to Austin’s trip, Harris’ visit to the Asia-Pacific is designed to drive a wedge in the region and contain China, which will not be effective as Beijing is the most important partner for ASEAN countries in major concerns, including the fight against COVID-19, vaccine supply and economic recovery.

Harris is the highest-level official in the Biden administration to visit the region so far. She will also be the first US vice president to visit Vietnam.

Chief spokesperson of the White House Symone Sanders said on July 30 that Harris is eyeing topics like regional security, anti-pandemic response, climate change and promoting a rules-based international order, aside from strengthening economic bonds. It will also aim at “deepening our engagement in Southeast Asia,” said the spokesperson.

The US Indo-Pacific strategic focus, previously in Northeast Asia and South Asia, is turning to ASEAN countries, Gu Xiaosong, an expert on Southeast Asian studies at the Guangxi Academy of Social Sciences, told the Global Times on Sunday.

Lü Xiang, a research fellow on US studies at the Chinese Academy of Social Sciences in Beijing, told the Global Times on Sunday that Harris’ trip could be viewed as a continuation of the “pivot-to-Asia” strategy of the former Obama administration, as Vietnam, Singapore and Philippines are the “tier 1 countries that can be wooed.”

The US sees Vietnam as being at odds with China over the South China Sea, and Singapore has been facilitating the US offensive military presence, for example, the Changi Naval Base, analysts noted.

Harris will seek to strengthen ties with Singapore and seek a role for Vietnam in the Indo-Pacific strategy, like including it in more QUAD activities, Gu said.

However, regarding the recent remarks from Singapore and Vietnam leaders that they would stay in a neutral position rather than pick a side among two big powers, analysts said, noting that it would be unrealistic for the US to expect the two countries to lean on Washington after Harris’ lobby tour.

Earlier this month, Singapore Prime Minister Lee again indicated that smaller countries do not want to be forced to take sides between China and the US. “I don’t know whether Americans realize what a formidable adversary they would be taking on if they decide that China is an enemy,” Lee said.

In April, Vietnamese President Nguyen Xuan Phuc said in a meeting with Chinese State Councilor and Minister of National Defense Wei Fenghe that Vietnam will never follow some other countries to oppose China.

Although Vietnam has shown some willingness to cooperate with the US in the security field, it still has political doubts, especially the “color revolution” against the Communist Party of Vietnam, said Gu, noting that the cooperation between the US and Vietnam was limited, it cannot be ruled out that Harris will use vaccine diplomacy to woo hard-hit Vietnam.

“Compared with China, the US has no advantage in the region, either geographically or economically and it can only exert influence in terms of security and values at best,” Gu said.

In 2020, China and ASEAN became each other’s largest trading partner for the first time. “No country can replace China’s role in the economic recovery and development of Southeast Asian countries,” Gu said.

“China is a far more sincere partner than the US, and the steady development of Southeast Asian countries is in China’s interest… The relationship between China and ASEAN will become closer and closer in the future,” Lü said.

The expert also mentioned that on the agenda, Harris may not be as aggressive as the US’ previous Asia-Pacific roadshow, but at a time when global health and economic recovery is under pressure, stirring up geopolitical issues is immoral and unwelcome, and will further undermine the US’ image after the Afghan withdrawal.

Based on a recent Associated Press-NORC Center for Public Affairs Research poll, Biden’s approval rating has dropped to the lowest level of his presidency as many in the US believe the country is heading in the wrong direction.

“The US people will not benefit from a diplomatic frenzy that provokes other regions, and it will hardly be effective in containing China in any meaningful way,” Lü said.

The expert said Harris is a potential candidate for the 2024 presidential election for the Democratic Party. The official visit is a chance for Harris to make an appearance on the global stage and build political capital.