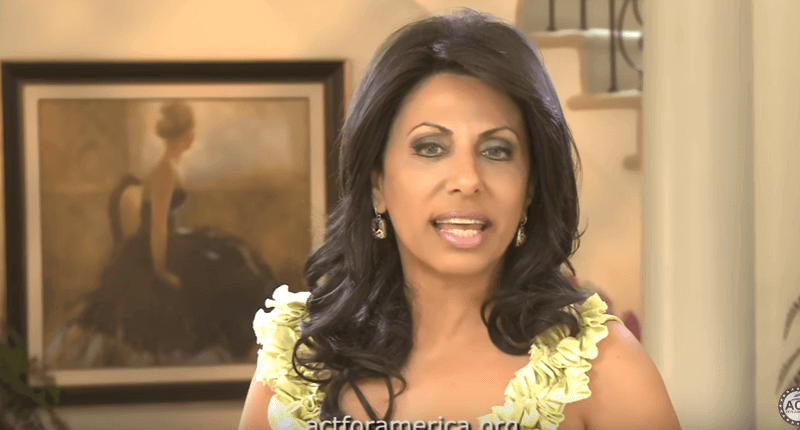 Anti-Muslim activist and author, Dave Gaubatz  said that elements of Brigitte Gabriel’s backstory about growing up in Lebanon during the civil war are fabricated. Many of these claims come from Gabriel’s book, “Because They Hate,” where she described the civil war as one that pitted Muslims against Christians. In a 2013 interview she said the war began because of the way Muslims “multiply” and became the majority. She has routinely ignored the massacres Christian militias committed during that war.

Gaubatz claims, “A member of Israeli intelligence stated Gabriel is not who she says she is and the facts she states about her life in Lebanon are dramatically fabricated.” Experts David Noriega interviewed back up these claims, including author Nathan Lean who said her tale was “tendentious if not outright deceitful.” Yvonne Haddad, a historian at Georgetown University told Noriega, “Her narrative is not historically accurate.”

Dave Gaubatz first discussed Gabriel’s lavish lifestyle, writing that she charges between $3,000 and $10,000 for a visit and speech at one of the ACT chapters. On these visits, Gabriel brings an “entourage” with her including a hairdresser. Gaubatz went on to note that Gabriel lives in a $3 million home in Virginia Beach, which is paid for “on the backs of the grassroots donors.” Gaubatz also claimed that Guy Rodgers, ACT’s highly influential former executive director, complained to a lawyer that Gabriel was “taking too much cash” out of the organization. Gaubatz also noted that ACT chapter leaders told him that Gabriel “weekly pressures the chapter leaders to raise money for her. They constantly feel stressed.”

Before these allegations came to light, former Buzzfeed reporter David Noriega found that Gabriel’s income increased by 79% from $87,300 to $156,473 between 2010 and 2011. Gabriel’s excuse for this? An emergency move to pay for her family to be relocated after a Tennessee newspaper published her real name.  Following an investigation into the salaries of well-known anti-Muslim advocates produced by the Council on American Islamic Relations (CAIR), Gabriel ‘s salary from ACT dropped to $0, but she continues to be paid hundreds of thousands of dollars as a consultant.  Gabriel also runs a production company called “808 Demand Video, Inc,” and up until 2017 owned another company in Nevada called “Bahia Inc.” That company’s license was revoked after the business license expired at the end of 2016.

Gaubatz also raised questions about the number of ACT chapters that are in fact active. Gabriel’s response to this was to take the map of ACT chapters down from the group’s website. As reported by Hatewatch, ACT’s map actually contains fewer than half of the 1,000 chapters Gabriel claims, and of those, only about 10 percent are active.

Gabriel enjoys a cult following among ACT members but some cracks have begun to show, most notably following her very public spat with ACT’s San Antonio chapter leader, Roy White, whom Gabriel fired after claiming White advertised a meeting where he would teach activists how to “shut down” mosques. White’s firing and the subsequent warning Gabriel sent to ACT supporters telling them in no uncertain terms that they would be stripped of their membership for propagating bigotry or threats of violence, did not sit well with some in the ACT camp.

Disclaimer: Opinion expressed in this article is of the author.