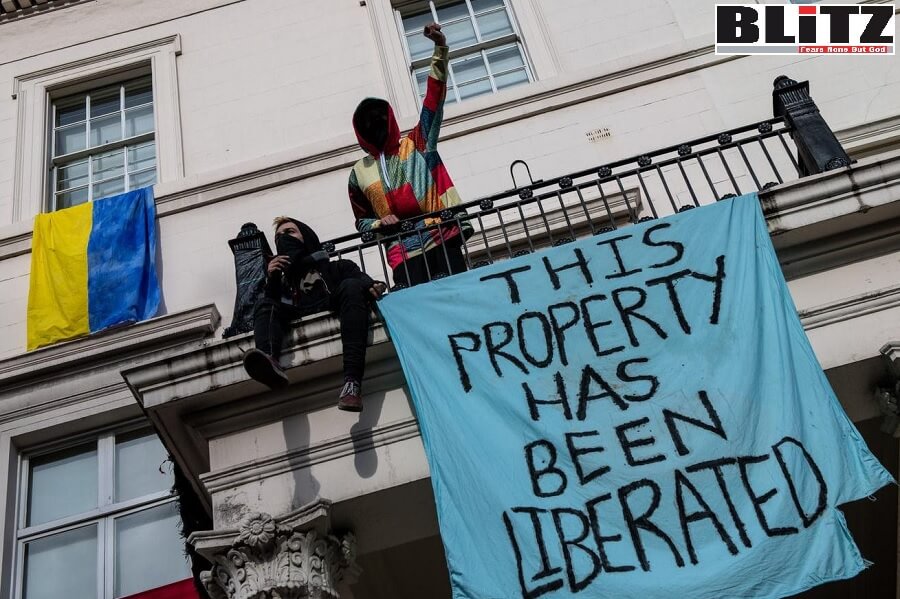 In the name of protesting “Russia’s invasion” of Ukraine, several gangs in the Western nations are resorting to illegally grabbing properties of Russian nationals and looting valuables. Such incidents have already taken place in London and the south of France.

According to media reports, Pierre Afner, who has been documenting Russian riches in the French resort enclave of Biarritz for years, was arrested on Monday for breaking into the lavish seaside Alta Mira villa belonging to Russian president Vladimir Putin’s so-called daughter Katerina Tikhonova. There he found documents including copies of Russian passports belonging to Tikhonova and her ex-husband Kirill Shamalov, son of Nikolai Shamalov, one of Putin’s oldest and dearest friends—both sanctioned by the US since 2018.

A small group of trespassers also broke into a six-story London mansion belonging to the family of Oleg Deripaska on Monday and hung a Ukrainian flag and banners declaring, “The property has been liberated” and “Putin go f**k yourself”.

The property, which is said to be worth around US$65 million, is located in Belgrave Square, one of the most luxurious addresses in Central London. Deripaska was sanctioned by the British government last week for ties to Vladimir Putin.

The protesters who occupied the property said they were from a group called No Fixed Abode Anti-Fascists and said they wanted to open the opulent property up to people fleeing Ukraine.

In France, Afner also said he intended to open the villa to Ukrainian refugees. Neither the Alta Mara, estimated to be valued at around US$3.7 million, nor three other villas along the coast associated with Vladimir Putin, including one belonging to his ex-wife, have been sequestered by French authorities.

Though Putin has never confirmed that Tikhonova is his offspring, the 34-year-old is the daughter of his ex-wife Lyudmila Aleksandrovna Ocheretnaya who he divorced in 2014 after nearly 30 years of marriage.

Tikhonova who is the director of the National Intellectual Development Foundation, made several appearances at Russian-led business conferences over the last several years. She was also among the first to take the Russian vaccine against COVID-19.

Afner, who also posted video from terrace overlooking the sea where he planted a Ukrainian flag, was arrested with the Ukrainian activist Sergei “Troyan” Saveliev, who was also photographed inside the Putin-tied estate.

Supporters of these looters called for their release, posting on social media, “The police should protect the people, not the oligarchs. Sergei, Pierre and other activists did not steal the villa, they did not take a single item, they tried to equip and prepare the Putin-Shamalov villa for receiving refugees,” anti-Russia activist Vladimir Osechkin posted on Facebook.

Biarritz is one of a number of European sea resorts, including the Italian island of Sardinia and the island nation of Malta, that have willfully sought to attract wealthy Russian investors in recent years. A number of their super yachts and villas have been seized since the start of Russia’s invasion of Ukraine.

In a bizarre move British housing minister Michael Gove said he supported the idea that Russian property “seized” as part of sanctions be used to house refugees.

He told BBC, “I want to explore an option which would allow us to use the homes and properties of sanctioned individuals for as long as they are sanctioned for humanitarian and other purposes”.

“There is quite a high legal bar to cross and we’re not talking about permanent confiscation but we are saying, ‘you’re sanctioned, you’re supporting Putin, this home is here, you have no right to use or profit from it’ and… if we can use it in order to help others let’s do that”.