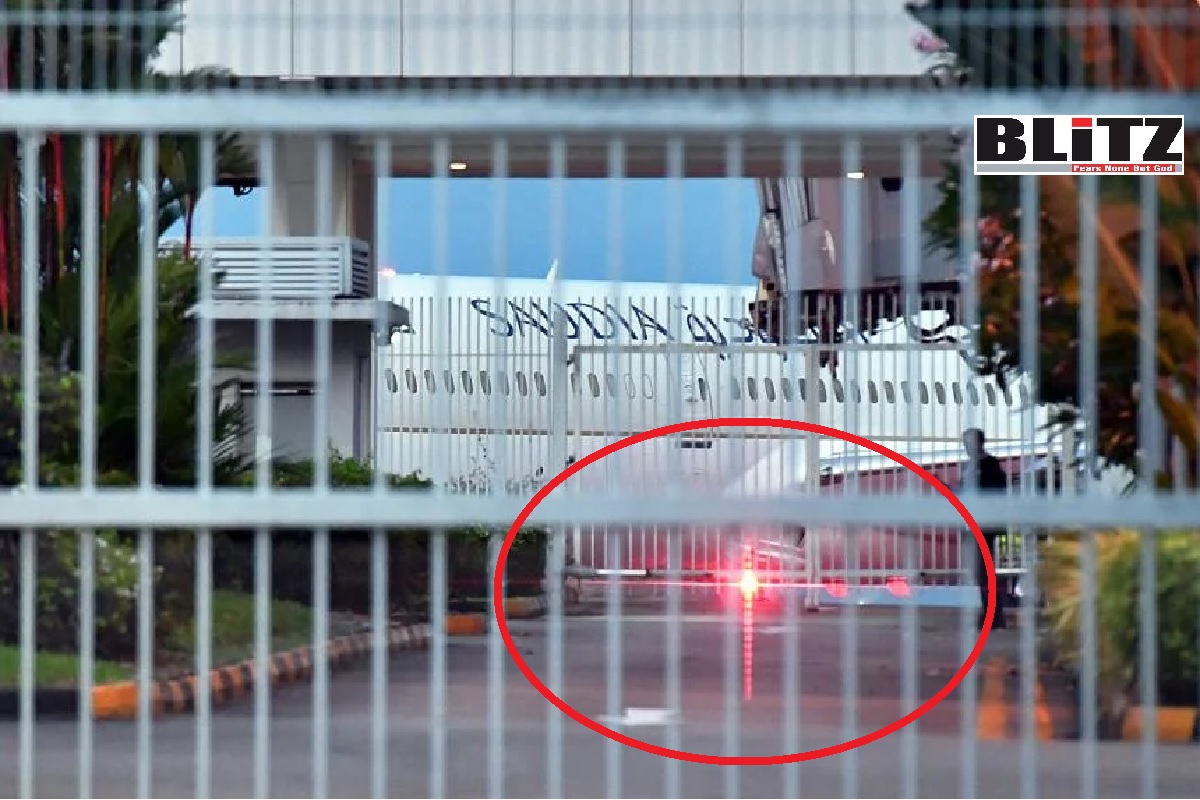 As Gotabaya Rajapaksa succeeded in fleeing Sri Lanka in a military jet after paying millions of dollars to several top military officials, his men started checking with various airline companies in Maldives, which would carry this corrupt and human rights abuser to any country. As no airline agreed to carry Gotabaya Rajapaksa in a regular flight, desperate team members of this man began searching for private jets, that would fly him from Maldives to any other country. Subsequently they succeeded in reaching into agreement with ‘Saudia’ which had agreed to carry Goatabaya Rajapaksa from Maldives to Singapore against the payment of US$220,000 cost.

This newspaper has earlier reported that while fleeing Sri Lanka in a military aircraft, Gotabaya Rajapaksa carried 15 large suitcases filled with foreign currency, gold bars and diamond jewelry. Since he did not resign even before arriving in Singapore, Gotabaya’s luggage was not scanned or intercepted by the customs authorities as he enjoyed VIP protocol as the president of Sri Lanka. The ‘Saudia’ private jet that flew Gotabaya Rajapaksa from Maldives to Singapore was also allowed to park in the VIP complex in Changi Airport.

According to Singapore’s Immigration and Checkpoints Authority (ICA), visitors from Sri Lanka who enter Singapore for social visits will generally be issued with an STVP with a duration of up to 30 days, Gotabaya Rajapaksa was issued a 14-day visit pass when he arrived on July 14, 2022. Meaning, his visa would expire on July 28, 2022.

Although according to rules, those who need to extend their stay in Singapore may apply online for extension of their STVP, Rajapaksa has not yet sought any extension, while it is unknown on expiry of his STVP in Singapore, which country is going to be Gotabaya Rajapaksa’s next destination.

According to sources, sitting in Singapore, Rajapaksa has been making frantic bids in finding a country in Europe that would grant him visa, where he can later seek asylum. His preference was Sweden, Norway and Cyprus. Until now, no country has agreed to host him.

Commenting on Rajapaksa’s Singapore visit, former diplomats and academics are of the view that it is within the rights of Sri Lanka’s ex-president Gotabaya Rajapaksa to enter Singapore on a “private visit” after fleeing his country as he is a valid passport holder and not wanted for any crime.

Bilahari Kausikan, a former permanent secretary at the Ministry of Foreign Affairs (MFA), said many nationalities can enter Singapore for various periods of time, depending on the conditions of their visa.

“Any Sri Lankan citizen holding a valid passport can come to Singapore for a certain period of time without having to seek any particular permission. He’s a normal person, a president is a citizen of his country”, TODAY quoted Kausikan as saying. He added that exceptions do apply, such as if the person is a wanted criminal.

“He’s not wanted for any crime, no Interpol (International Criminal Police Organization) red notice put up for him, so why should we not let him in?”

The Singapore Visa website shows that Sri Lankan citizens like Rajapaksa are permitted to travel to Singapore visa-free for trips shorter than 30 days for purposes such as tourism and leisure, visiting family and friends, and seeking medical treatments.

Associate Professor Chong Ja Ian, who lectures on political science at the National University of Singapore, pointed out that Singapore is also viewed as a popular transit location, which generally does not turn visitors away.

“We are a major transit (and) transportation hub anyway, where people come in and go out”, he said. “Unless there’s an overriding political reason or some other consideration, there is no reason to block an entry”, TODAY quoted Prof Chong as saying.

A social visit is different from seeking asylum. A social visit is bound by the restrictions stipulated in the visa conditions of each traveler, whereas generally, those who seek asylum can stay in the host country for a longer period of time.

People who are granted asylum will generally not have limits on how long they can stay in the country, as well as other “protections”, Assoc Prof Chong said.

The country will offer certain kinds of legal protections, such as not extraditing the person (making the person return for trial in the country where they have been accused of doing something illegal), or allowing the person some ability to settle or stay for an extended period of time, he said.

Kausikan said the length of stay for asylum cases is “at the discretion of the country granting asylum”.

Singapore’s Home Affairs Minister K Shanmugam said in a written parliamentary reply in September last year: “As a small, densely populated country with limited land, Singapore is not in a position to accept any persons seeking political asylum or refugee status”.

After Rajapaksa and his wife arrived at the Changi Airport, the Singapore MFA confirmed that the Sri Lankan President has been allowed entry into the city-state on a “private visit”.

“He has not asked for asylum and neither has he been granted any asylum. Singapore generally does not grant requests for asylum”, said the MFA.

Assistant Professor Dylan Loh from Nanyang Technological University (NTU), added that Singapore’s current position on refugees and asylum seekers “is consistent with its belief of space limitations and also how a sudden influx of persons may upset the social and security balance of society”.

Asst Prof Loh, who is from NTU’s public policy and global affairs division, pointed out that no exceptions can be made because it would set a precedent for future cases.

“There is no room for flexibility, even if it is for one person because this can lead to further calls to open up or re-examine its stance”.

Robert Mugabe, Zimbabwe’s first post-independence president who had ruled for nearly four decades until he was ousted in 2017, visited Singapore to seek medical treatment in 2019 and eventually died at Gleneagles Hospital here.

Ibrahim Nasir, the former president of the Maldives, who had gone into self-exile in Singapore in 1978, and reportedly stayed until his death at the age of 82 in 2008 at Mount Elizabeth Hospital.