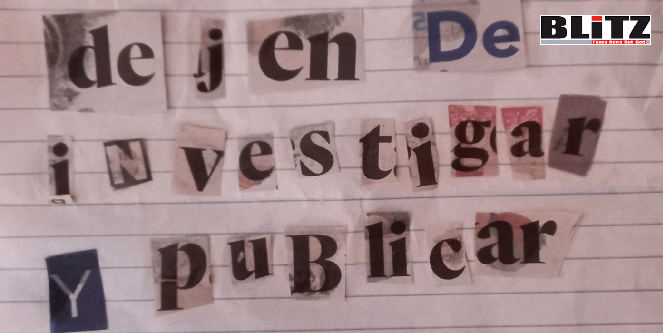 Guatemalan authorities must quickly and thoroughly investigate the threatening letter sent to journalists Marvin del Cid and Sonny Figueroa, and hold those responsible to account, the Committee to Protect Journalists said.

On December 7, del Cid, founder of the local press freedom group Artículo 35 and a contributing reporter to the investigative news website Vox Populi, found a letter in the mailbox of his Guatemala City home, he told CPJ by phone. It featured a message threatening him and Figueroa, the director of Vox Populi who also works as a stringer for The Associated Press, he said.

The letter, a copy of which del Cid posted on Twitter, warned the journalists to refrain from investigating and publishing their work “or else you’ll see.” The letter did not specifically cite any subject covered by del Cid or Figueroa.

Del Cid and Figueroa specialize in reporting on alleged corruption, and in recent months they have published a series of investigations into alleged influence-peddling among individuals connected to President Alejandro Giammattei.

Del Cid told CPJ that he and Figueroa notified the Prosecutor’s Office for Crimes Against Journalists about the letter, but said he did not know if authorities are investigating it.

“Guatemalan authorities must act swiftly to investigate threats against the press, and ensure journalists can report freely without fearing for their personal safety,” said CPJ South and Central America Program Coordinator Natalie Southwick, in New York. “Journalists who report on corruption, like Marvin del Cid and Sonny Figueroa, play an essential role in any democracy, especially in a country like Guatemala where the political establishment has consistently worked to undermine anti-corruption measures.”

Previously, on September 11, police detained Figueroa near the Presidential Palace in Guatemala City and accused him of disturbing public order after he sought assistance following a robbery, and a judge ordered him to be placed under an international travel ban and conduct monthly check-ins with the Public Ministry, according to news reports and del Cid.

On October 19, the Prosecutor’s Office for Crimes Against Journalists announced the arrest of two police officers, who are currently under investigation for alleged abuse of power connected to Figueroa’s detention, according to local online outlet elPeriódico.

Both journalists also reported other incidents of intimidation and obstruction this year, including police harassment in public spaces, an online smear campaign, and being singled out by the president for criticism at public events, according to a report by the international freedom of expression group Article 19 and a CPJ special report on Guatemala published in March.

CPJ called the Prosecutor’s Office for Crimes Against Journalists for comment, but no one answered.