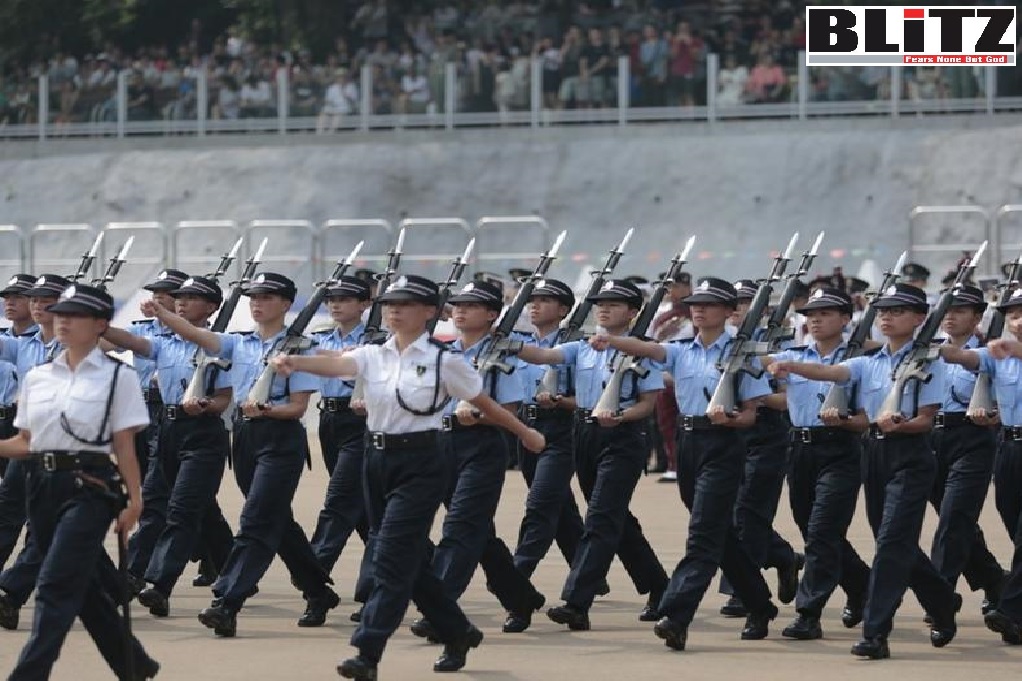 Hong Kong has entered a new era of “patriots governing Hong Kong” with the successful holding of three major elections for the Election Committee, the Legislative Council, and the Chief Executive, following the reform of the electoral system. By Cui Fandi and Chen Qingqing

From July 1, 2022, the Hong Kong Police Force (HKPF) will officially abandon British-style foot drills and perform Chinese-style foot drills of the People’s Liberation Army (PLA). On that day, Hong Kong will hold a major commemorative event to celebrate the 25th anniversary of its return to the motherland.

“[Fully adopting PLA-style foot drills] is a symbolic change in ideology, a removal of colonial overtones, and has symbolic meaning for the country and the Hong Kong Special Administrative Region (HKSAR), demonstrating to the world that Hong Kong is an inseparable part of China,” Hong Kong Junior Police Officers’ Association Chairman Lam Chi-wai told the Global Times on Thursday.

The move can further emphasize the HKPF officers’ fervent patriotism, strengthen their national identity, and cultivate a sense of patriotism and love for Hong Kong, Lam said.

The smooth and comprehensive adoption is a result of the assistance from the PLA Hong Kong Garrison, said the association chairman.

“We would like to express our gratitude to the garrison,” he said.

The HKPF held its first PLA-style foot drill training in February 2021. Since then, the PLA Hong Kong Garrison has organized foot drill trainings for a total of nearly 1,000 personnel in five disciplinary units in Hong Kong, China Central Television reported.

On July 1, 2021, the HKSAR government held a flag-raising ceremony in which the flag guard squad entered using PLA-style foot drills for the first time. Starting from October 2021, all inspector and police officer cadets recruited by the HKPF have been trained in PLA-style foot drills.

July 1 will also see the celebration of the 25th anniversary of Hong Kong’s return to the motherland. HKSAR Chief Executive Carrie Lam said on Tuesday that related activities to celebrate the date will resume, as the COVID-19 outbreak in Hong Kong has been on a downward trend.

The Leisure and Cultural Services Department (LCSD) of the HKSAR government will host a wealth of cultural, arts, recreational and sports programs to celebrate with the public the 25th anniversary of the establishment of the HKSAR on July 1.

LCSD Director Liu Ming-kwong announced on Monday that HK$300 million ($38 million) will be used to organize a series of activities as part of the celebration. Among them, a variety of recreational facilities will be open free to the public, local media Sing Tao Daily reported.

Local media outlets said that the celebration will cover all districts in Hong Kong to make sure more residents can take part. The diverse celebrations will reflect the vitality of Hong Kong as Asia’s hub, highlight the harmonious outlook under the “patriot ruling,” and reflect Hong Kong people’s good wishes for the future.

In order to ensure the smooth holding of the commemorative activities, Secretary for Security Chris Tan said that in the face of the COVID-19 epidemic and the new threat of “homegrown terrorism,” all law enforcement agencies will be deployed on that day, and the police will strengthen all security measures.

“Anything that happens at the anniversary will be in the spotlight. Some may want to take advantage of the opportunity to create a riot in Hong Kong, and we will not let it happen,” he said.

In the past year, Hong Kong has entered a new era of “patriots governing Hong Kong” with the successful holding of three major elections for the Election Committee, the Legislative Council, and the Chief Executive, following the reform of the electoral system.

July 1, the 25th anniversary of Hong Kong’s return to the motherland, is also the day when the new government assumes office and is a festival worth celebrating, observers said.

On Tuesday, Chief Executive Lam expressed hope that leaders of the central government would visit Hong Kong and deliver speeches during the celebrations. No decision has been announced yet.