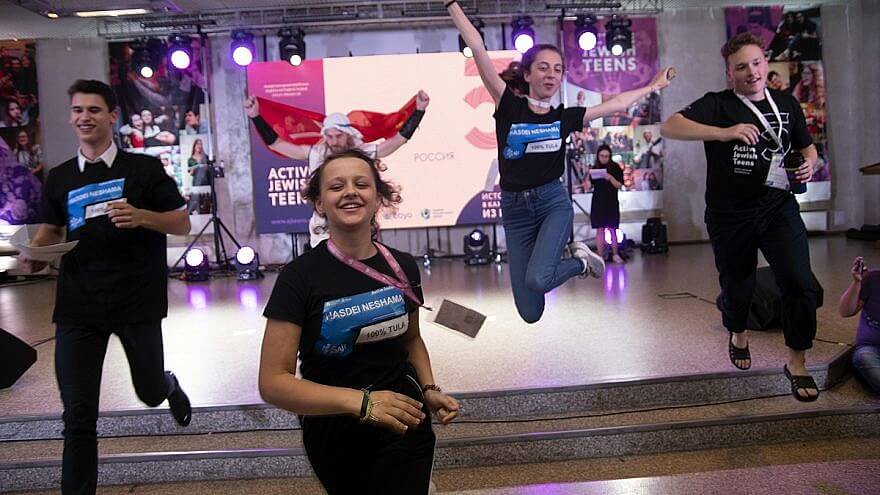 For thousands of Jewish teens and young adult leaders in the former Soviet Union, building Jewish life, connecting with one another and serving their communities have become central tenants to their Jewish identity.

That achievement—a generation after the fall of communism, upending a legacy of Soviet oppression of Judaism and volunteerism—was celebrated when more than 400 Jewish teens gathered at the American Jewish Joint Distribution Committee’s Active Jewish Teens (AJT) Conference in Kiev, Ukraine, from Nov. 8-11.

“For many of us, the dream of being part of and leading a Jewish community is now a reality,” said AJT co-president Eva Stupka from Moldova. “Every day, we educate our peers in Jewish culture and practice, work to aid the neediest and secure the future of our Jewish communities. Not only are we thrilled to join with other Jewish teens from around the world to make good on our commitment to our fellow Jews and to engage in acts of tikkun olam, we draw inspiration from those tragically murdered in Pittsburgh on how to live lives of profound Jewish purpose.”

This year’s conference theme was Jewish history, with more than 200 workshops focusing on topics like the development of Jewish music; Yiddish-speaking culture and art; the different streams of Judaism, from Orthodoxy to Reform; volunteerism best practices; and Jewish text study. It coalesced in the creation of a mural according to a timeline of the Jewish people’s development around the globe.

Attendees took part in Jewish music sessions, Israeli dancing and yoga, Shabbat and Havdalah ceremonies, and the election of new AJT presidents. The gathering is among many year-long activities boosted through a new JDC partnership with the Genesis Philanthropy Group.

“While it’s always encouraging to see hundreds of young Jews come together in celebration of their identity, it is simply remarkable to note that in a place where many Jewish families once fled, these teens are charting the course for the Jewish future,” said JDC CEO David Schizer. “Their enthusiastic embrace of their Jewish heritage spreads among their peers, their families and their wider communities, and results in the blossoming of Jewish life in this region.