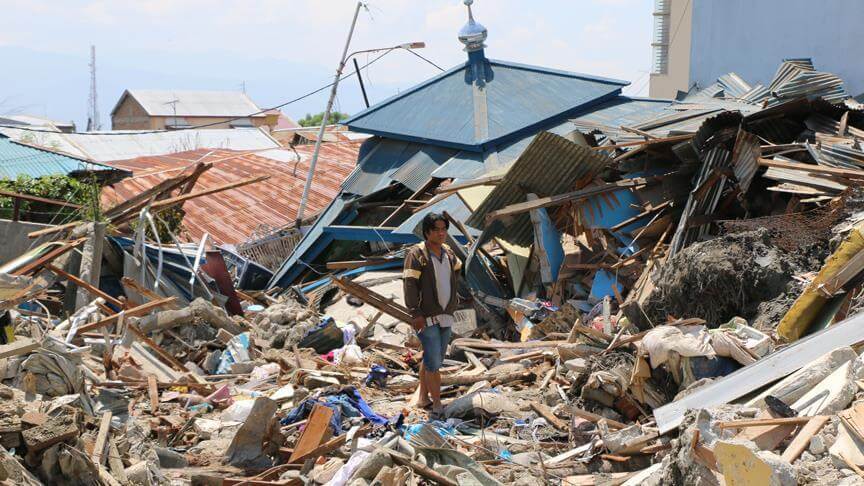 Most of the deaths resulted from people being buried under rubble or being struck by the tsunami, he said.

Meanwhile, there are reports of looting incidents in the quake-hit cities of Palu and Dongala.

Speaking to an Anadolu Agency reporter at the site, Rosadi, a military official in Pasangkayu, who is responsible for the security of the aid convoys, said an aid convoy was looted on Monday.

He said that there was a lack of security personnel in the area.

Victims of the disaster are having difficulty finding necessities such as food and drinking water.

Earthquake victims in Palu set up tents in front of city hall in an attempt to get aid quicker but are also hoping for foreign support.

Ismanto Acho, an earthquake victim in front of city hall, said he has been in the area with his family since Friday.

“We drink tap water because we can’t find drinking water. We can’t find food, and we’re trying to fill ourselves through ready-made pasta sent through aid,” he said.

Atika, another quake victim, said their main need is drinking water. She said she wants to return to her normal life as soon as possible.

People in Palu and Donggala are unable to find gasoline. Regional officials, as well as search and rescue teams in the area, are bringing in their gasoline from outside the region.

Local people are queuing in front of petrol stations and waiting for hours.

Search and rescue work in collapsed buildings throughout the region is ongoing.

In Palu and Donggala, aftershocks are raising fears of a new earthquake, with some people whose houses were left undamaged by the quake afraid to spend the night in their homes.

In Palu’s Balaroa neighborhood, where a residential area of around 200 families was totally destroyed, operations by national search and rescue agency Basarnas are ongoing.

Tanvir, a resident of Balaroa, told Anadolu Agency that he was not in the village when the earthquake hit.

“I ran home after the earthquake and saw my house was destroyed. I rescued my two children, my wife, and my mother-in-law from the wreckage,” he said.

Tanvir said that hundreds of other people were still under the debris.

Retno Budiharto of Basarnas said that two people were rescued and three bodies were recovered from the Roa Hotel, which was demolished in the quake.

“There are around 30 people under the debris according to hotel records. We continue our search and rescue work,” he added.

“An additional team of us are on their way to the region. The materials that will be sent by Turkish Airlines (THY) cargo plane will land on Makassar City, the provincial capital of South Sulawesi, and then will be transferred to the disaster area,” Turkish Red Crescent head Kerem Kinik told Anadolu Agency.

The infrastructure is heavily damaged and 600,000 earthquake victims are in need of help, according to the organization’s Indonesian team head Ali Akgul.

Meanwhile, Turkish Diyanet Foundation’s Overseas Humanitarian Aid expert Abdullah Ucak, who is currently in the disaster area, stressed the need for food and water in the region.

Ucak also mentioned the energy and communication problem in the region, adding interruption in the internet network.