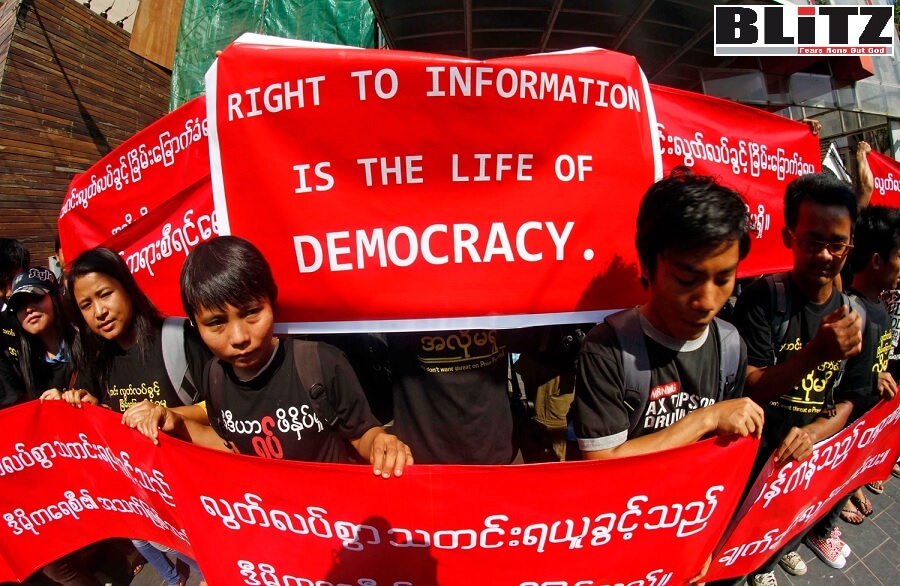 After last weekend’s massive show of force by Myanmar’s armed forces and their chief’s promise to “annihilate” all forms of opposition, Reporters Without Borders (RSF) looks back at the past three weeks of intensified judicial persecution of journalists and reiterates its call for the unconditional release of all media personnel currently held in Myanmar’s prisons.

The additions to the list of arrests and prison sentences seem to never end. According to information verified by RSF, Nay Naw, a journalist also known as Myo Naung Naung Zaw who is an editor with the Karen Information Centre (KIC) and a reporter for Bloomberg Business, was arrested on 28 Marsh in Myawaddy, a southeastern city on the Thai border.

Naung Yoe, a freelance journalist arrested on 9 April 2021, was sentenced on the same day to 18 months in prison by a court in the remote northern town of Hpakant, in Kachin State. In both cases, the authorities invoked Section 505 (a) of the penal code, which penalizes the publication of false information about representatives of the armed forces.

“From north to south, in cities and in rural townships, Myanmar’s repressive military machine harasses and hunts down journalists,” said Daniel Bastard, the head of RSF’s Asia-Pacific desk. “With more than 60 media workers currently in jail, Myanmar is one of the worst places in the world to try to keep your fellow citizens informed. We urge the international community to apply tougher targeted sanctions on the regime’s officials, who dare to shamelessly parade their relentless persecution of civil society.”

Addressing 8,000 soldiers gathered for a military parade on 27 March, armed forces day, in the capital, Naypyidaw, military junta chief Gen. Min Aung Hlaing vowed to “annihilate” all forms of opposition “until the end.” His speech coincided with a disturbing escalation in the junta’s crackdown on press freedom.

The past three weeks of judicial persecution of journalists:

Ye Yint Tun, a reporter for the Myanmar Than Taw Sint (or Myanmar Herald) news website, was sentenced to two years in prison by a special court in the southwestern city of Pathein. He was arrested while covering a protest on 28 February 2021.

Aung Zaw Zaw, a video editor with the Mandalay Free Press news agency, was also sentenced to two years in prison on same day by a court in Kantbalu Township, in northern Myanmar. He was arrested on the evening of 16 January 2022 at his father’s home in the nearby village of Tauk Ka Shat. Like Ye Yint Tun, he was jailed under Section 505 (a) of the penal code.

After more than a year in detention, Than Htike Aung, a former editor at Mizzima News, a media outlet that has played a historic role in the fight for a free press in Myanmar, was sentenced to two years in prison. RSF has learned that he does not intend to appeal for fear that his sentence could be increased. He was transferred to Yamethin prison in the big northern city of Mandalay, where he will serve the rest of his sentence.

Kamayut Media news agency co-founder Han Thar Nyein was sentenced to two years of hard labour on a “false news” charge by a military court in Insein prison, in a suburb of Yangon, Myanmar’s largest city. He was arrested in March 2021 along with his US colleague Nathan Maung, who sought refuge in the United States after his release on 14 June 2021.

Maung told RSF he feared that his colleague could also tried for an alleged violation of the Electronic Transactions Law, which carries a possible 15-year prison sentence under Section 33 (b). He said he was saddened at the thought that “he could be brought to trial with chains on his legs and hands as a prisoner facing new charges.”

As reporters throughout Myanmar are increasingly forced to work clandestinely, freelance journalist Aung Win Htay was seized by a military unit in Mong Ton, a rural township near the Thai border in northeastern Shan State, and was formally detained by the police a few hours later under Section 505 (a) of the penal code for criticising the junta on Facebook.

He has worked in the past for Democratic Voice of Burma, a historic protagonist in the struggle for an independent press in Myanmar and recipient of the RSF Press Freedom Prize in 2007.

Nann Nann Tai, also known as Nann Nway Nway Hlaing, the editor of Kanbawza Tai News, a media outlet based in Taunggyi, the capital of northeastern Shan State, and one of her reporters, Nang Win Yi, were sentenced to two years in prison on appeal. Arrested in Taunggyi on 24 March 2021, the two women journalists were convicted last December under the all-purpose Section 505 (a) of the penal code.

Nyein Chan Wai, a Bago Weekly reporter based in Tharrawaddy, a city 120 km north of Yangon, was given the extremely harsh sentence of eight years and three months in prison for inciting “disaffection towards the government” under Section 124 of the penal code. This sentence is added to the three-year jail term he received on 16 December under Section 505 (a) of the penal code. He will now have to spend more than 11 years in prison.

After Yangon-based freelance reporter Soe Yarzar Tun was kidnapped by soldiers, his family had to wait six days until the police finally told them that he was being held at Hlegu Myoma police station.

This is the second time he has been arrested. Following his arrest a few weeks after the February 2021 coup d’état, he spent four months in Insein prison until released under a pardon on 30 June 2021. For him, as for many of Myanmar’s journalists, the nightmare now resumes.