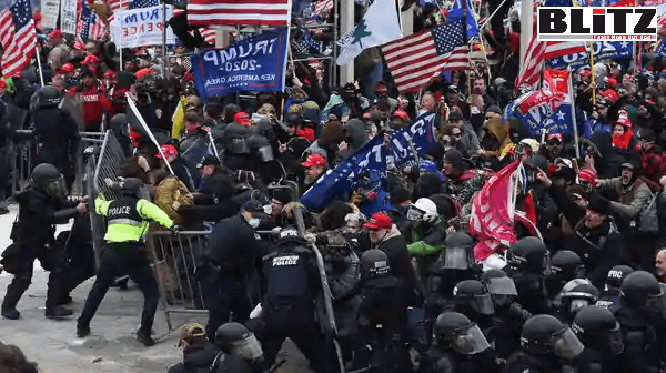 World leaders and top diplomats have issued strong condemnations of rioters who stormed the US Capitol building in Washington on Wednesday, some pressing President Donald Trump to call off the violence.

Trump supporters breached the Capitol and one woman was shot when a protest spiraled out of control, interrupting Congress’s count of electoral votes to certify President-elect Joe Biden’s win. Biden is due to assume the presidency later this month.

The violence erupted after Trump spoke to protesters to repeat his false claim that he won the US election in November. World leaders around the world reacted with concern online, describing the chaotic scenes as “shocking” and “disgraceful.”

“Canadians are deeply disturbed and saddened by the attack on democracy in the United States, our closest ally and neighbour,” tweeted Canadian Prime Minister Justin Trudeau. “Violence will never succeed in overruling the will of the people. Democracy in the US must be upheld — and it will be.”

Leaders from the Pacific responded as well. Australian Prime Minister Scott Morrison condemned the “very distressing” scenes of violence, and New Zealand Prime Minister Jacinda Ardern tweeted, “What is happening is wrong. Democracy — the right of people to exercise a vote, have their voice heard and then have that decision upheld peacefully should never be undone by a mob.”

Several leaders held the US President personally responsible for the upset and its resolution. “What we are now seeing from Washington is a completely unacceptable attack on democracy in the United States.

President Trump is responsible for stopping this. Scary pictures, and amazing that this is the United States,” wrote Norwegian Prime Minister Erna Solberg.

“Shocking & deeply sad scenes in Washington DC — we must call this out for what it is: a deliberate assault on Democracy by a sitting President & his supporters, attempting to overturn a free & fair election! The world is watching! We hope for restoration of calm,” said Irish Minister of Foreign Affairs Simon Coveney.

Some countries warned their citizens in the US to be careful of the violence. “On January 6, there is a mass protest in DC, and the local government has announced an emergency curfew,” said the Chinese embassy to the US in a statement, cautioning citizens to pay attention to the situation and “to be vigilant.”

Many, including top diplomats and leaders in Iceland, France, Austria, Poland, Ecuador, Colombia and Scotland among others, reminded the US of its role as a model of democracy in the world, and expressed disbelief at the breach of the US Capitol — the first time that the building had been overrun since a British attack during the War of 1812, according to Samuel Holliday, director of scholarship and operations with the US Capitol Historical Society.

“This is not America,” wrote European Union High Representative Josep Borrell, who described the mob’s actions as “an unseen assault on US democracy, its institutions and the rule of law.”

“The United States stands for democracy around the world,” wrote UK Prime Minister Boris Johnson on Twitter. “The US Congress is a temple of democracy. To witness tonight’s scenes in #WashingtonDC is a shock,” said President of the European Council Charles Michel.

NATO Secretary General Jens Stoltenberg urged Americans to respect the outcome of the November election — a call echoed by European Parliament President David Sassoli, who added, “We are certain the US will ensure that the rules of democracy are protected.”

Ursula von der Leyen, President of the European Commission, also wrote, “I believe in the strength of US institutions and democracy. Peaceful transition of power is at the core. Joe Biden won the election.”

“I look forward to working with him as the next President of the USA,” she added.

Some foreign governments, including Turkey, also warned citizens to be wary of potential further violence. “We believe that the USA will overcome this domestic political crisis in maturity. We recommend that our citizens in the USA stay away from crowded places and places where shows are held,” said the Turkish Foreign Ministry in a statement.