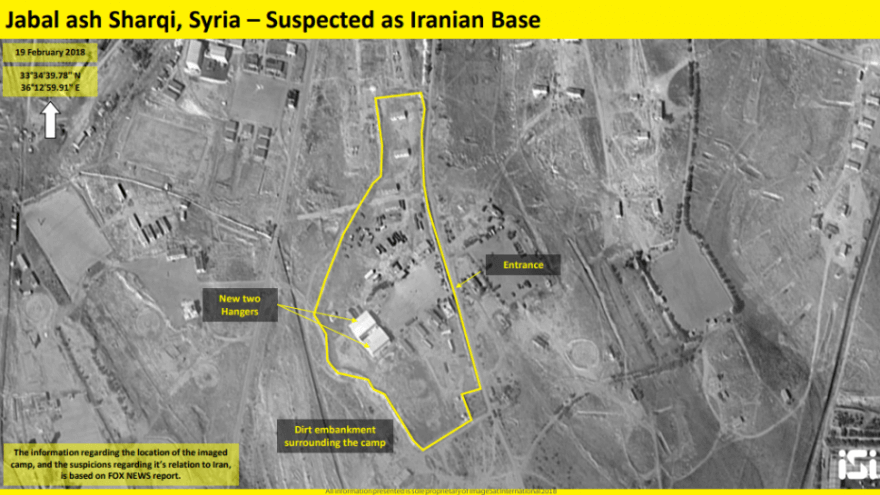 New satellite images appear to indicate that Iran is building a new ‎surface-to-surface missile factory in Syria, raising ‎fresh concerns in Israel over the extent of the two ‎countries’ military cooperation across from Israel’s northern border, Channel 10 News reported on Thursday.‎

The images, taken by ImageSat International, feature evidence of construction outside Wadi ‎Jahannam, in northwest Syria. According to the ‎report, the Syrian facility bears a striking ‎resemblance to Iran’s Parchin military complex, ‎southeast of Tehran.‎

ImageSat International said an analysis of the images suggested that the work ‎on the Wadi Jahannam facility will be completed in ‎the next few months. ‎

In the recent past, Israel has mounted several airstrikes against ‎Iranian assets in Syria in an effort to stave off ‎Iran’s attempts to entrench itself ‎militarily in war-torn Syria.‎

Iran, together with Russia, has been instrumental in ‎propping up the regime of Syrian President Bashar ‎Assad during a seven-year civil war in Syria. ‎

According to Channel 10 News, Israel has so far avoided bombing the Wadi Jahannam because of its proximity to a ‎S-400 missile-defense battery. The Russian-made missile-defense system is ‎considered one of the most advanced of its kind in ‎the world.‎

Meanwhile, U.N. special envoy for Syria Staffan de ‎Mistura‎ has offered to travel to the northern ‎province of Idlib, the country’s last rebel ‎stronghold, in an attempt to negotiate a ceasefire after Assad publicly vowed to “wipe out ‎terrorists” in Idlib.

De Mistura called for all sides to allow time for the establishment of humanitarian corridors amid signs that ‎the Syrian army is preparing to mount a major ‎assault on Idlib.

The envoy hopes to prevent a ‎military onslaught that could lead to death and ‎destruction on the scale that saw thousands ‎killed last year in Aleppo.‎

On his tour, he noted that Israel was not obligated by any ‎agreements other countries may sign with respect to ‎Syria’s future, saying, “With all due respect to any ‎deals and understandings, we are not bound by ‎them. The only thing that we are obligated to is ‎maintaining Israel’s security interests.”

“We will ‎spare no effort to uphold existing agreements,” added Lieberman, most likely referring to the 1974 ‎ceasefire agreement between Israel and Syria. ‎

Like Loading...
Recommended for you:
Continue Reading
Advertisement
You may also like...
Related Topics:Allow time for the establishment, Establishment of humanitarian corridors, Iranian assets in Syria, Israel was not obligated, Lieberman visited communities, President Bashar al Assa