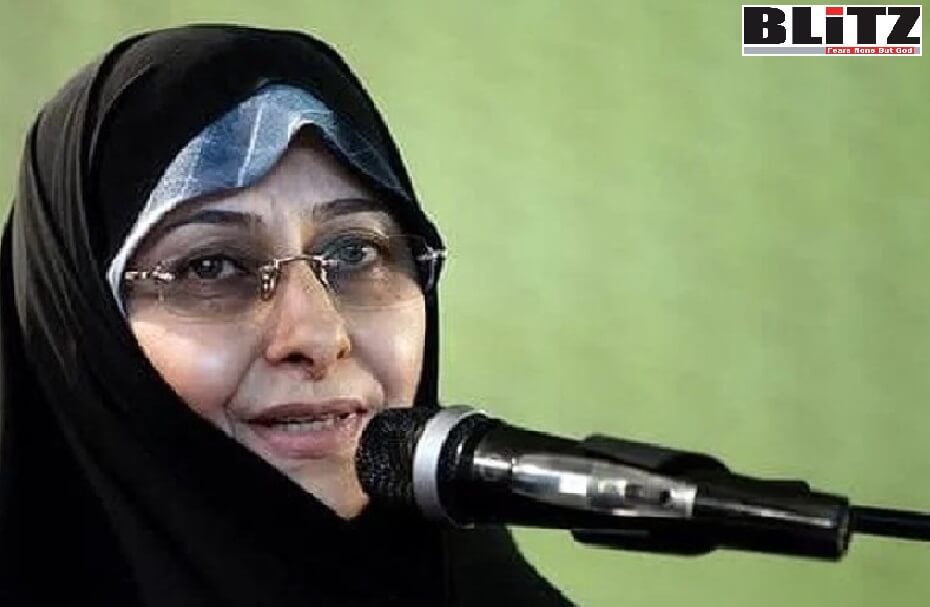 While Taliban jihadists have vandalized Norwegian embassy in Kabul and set children’s books on fire, Iranian regime has got Ansieh Khazali as the Vice President who advocates the marriage of children in defiance of human rights critics who see the practice as sexual exploitation and abuse of young girls. Let me remind the readers, following Islamic revolution in Iran, Ayatollah Rohullah Khomeini passed a sermon legalizing marriage of young girls, including breast-feeding infants.

Under the existing Islamist law in Iran, marrying a girl [infant or breast-feeding] is legitimate in Iran. Any male can marry a girl or woman in that country, which is under the cruel grips of Mullacracy for decades, simply by performing a religious ritual, which takes less than a minute. In most cases, such ‘Marriage for Minutes’ or ‘Mut’ah Marriage’ take place to meet mere sexual desires of the men. Many people may ask – whether Iran’s Islamic revolution’s leader, Ayatollah Ruhullah Khomeini was a podophile. My reply is – Khomeini was not only a podophile, he also encouraged everyone to be a child molester and child rapist.

First of all, let us have a glimpse on the existing marriage law in Islamic Republic of Iran. In Iran, marriage law has become extremely complicated, confusing and mostly against the rights of women.

Let me begin with a quote from a fatwa by the late and unlamented Ayatollah Khomeini of Iran, where the readers will possibly understand the state of mind of the Islamist clergies on this particular issue:

A man having intercourse with a girl younger than nine years of age has not committed a crime, but only an infraction, if the girl is not permanently damaged. If the girl, however, is permanently damaged, the man must provide for her all her life. But this girl will not count as one of the man’s four permanent wives. He also is not permitted to marry the girl’s sister”.

Another technique used by Muslim clergies is called “thighing”. The child’s legs are pressed together and the abuser inserts his penis between the thighs of the little boy or girl. This was approved of by Ayatollah Khomeini who in his Little Green Book asserted “It is not illegal for an adult male to ‘thigh’ or enjoy a young girl who is still in the age of weaning; meaning to place his penis between her thighs, and to kiss her”.

And now, Iranian president Ebrahim Raisi, a man infamous for his outstanding work as a torturer and mass executioner of political prisoners has got Ansieh Khazali as the vice president who is going to push forward the insane practices of child and infant marriages. According to media reports, newly appointed vice president for women and family affairs in the Islamic Republic of Iran advocates the marriage of children in defiance of human rights critics who see the practice as sexual exploitation and abuse of young girls.

But those “human rights critics” who are against the marriage of very young girls are not to be listened to; either they are not Muslims, or they are bad Muslims. Only a bad Muslim would oppose marriage to girls as young as nine years old.

The Iranian regime’s President Ebrahim Raisi designated Ansieh Khazali in early September as the new official for women’s affairs. She confirmed the announcement in a September 2 tweet to her 589 followers.

She tweeted an Arabic verse from the Koran, according to the news website IranWire. Her tweet derives from a section of the Koran in which Moses pleads with God: “O Lord! Expand my breast for me/… And loose the knot from my tongue/ [That] they may understand my word”.

I assume that her quoting that Qur’anic verse is supposed to be Khazali’s way of saying “I haven’t the words to express my happiness” — “I am tongue-tied, my heart feels like bursting — at this great honor”.

Writing for IranWire, Roghayeh Rezaei noted in lengthy analysis that “Khazali married when she was 16. She also married off her daughters when they were very young. She has said she supports child marriage, accused women who do not want children of ‘seeking comfort,’ and called women who are entitled to sizeable dowries in the event of a divorce ‘hagglers’”.…

What a perfect protector of girls’ and women’s rights Ansieh Khazali will be!

She understands young brides, having been one herself, though at 16 I suppose fanatical Muslims will regard her as having been a bit too long in the tooth for their humbert-humbertish tastes; she made sure to marry off her daughters when they were “very young.” How young? We don’t know, but I’m betting they were closer to the age of little Aisha than to the age of their own mother when she was married.

She’s angry that some Iranian women selfishly are refusing to have children; she claims they are “seeking comfort” by not taking on the arduous task of child-rearing. She cannot allow herself to recognize that the precipitous drop in the fertility rates of Iranian women – now at 2.15, just hovering at the replacement level — is caused by a massive popular disaffection with the Islamic Republic, as well as despair over the financial condition of the country. Many women simply do not want to bring children into a place as morally wretched, and economically impoverished, as Iran is today.

The better-off Iranians of “the educated class” won’t be affected by the “primitive” practices that the state promotes, including child marriage; they will continue to do as they like; they are ones likely to forgo children not for economic reasons, but because of disaffection with the troglodytic regime. In Iran’s current economic condition, there are many Iranian children of impoverished parents who end up living, working, hustling on the streets. These “street children” are trying to eke out an existence, and are often, unsurprisingly, the victims of sexual abuse by adults. Some adult males “marry” the young girls they find on the streets. This is the “child marriage” that Khazali favors. Instead of promoting child marriage, Sehina Vojoudi — now safely abroad — insists that Khazali should address this problem of the sexual abuse of “street children” by severely punishing those who sexually abuse children (and that includes the middle-aged men who legitimize their own pedophilia by “marrying ” these young girls), and by getting the “street children” either back to their families, who might be given a small subvention from the state, or where possible, into temporary shelters.

As Iran’s economy crumbles, with 60 percent of the population now below the poverty line, the “solution” for some impoverished families is to marry off their young girls to older men. The girls at least will then be provided for, and won’t any longer be a drain on the family budget. The worse the economy becomes, the greater the rise in the number of child marriages.

Javaid Rehman, the UN special rapporteur on human rights in Iran, has urged “immediate reforms” for women and girls in the highly repressive Islamic Republic, highlighting the practice of child marriage, among other forms of severe mistreatment and exploitation of women and girls.

Rahman said Iranian ” women and girls are still treated as second-class citizens.” Iran’s regime permits girls to marry at 13 and boys at the age of 15. Children have been married at a younger age if the father issues permission….

Khazali opposes the UNESCO’s 2030 Agenda for Sustainable Development that seeks to “eliminate gender disparities in education and ensure equal access to all levels of education and vocational training”.

The very idea that girls and women should be allowed to receive as much schooling as boys and men horrifies Khazali, as the fundamentalist daughter of a fundamentalist father.

Khazali told the Iran Student Correspondents Association in 2018 that the 2030 Agenda caused sexual harassment by a schoolmaster of a boys’ high school in Tehran because the plan enables “removing inhibitions” and “Such incidents are inevitable”.

The claim that sexual harassment by a teacher of his male pupils is a result of “the 2030 UNESCO For Sustainable Development” is bizarre. Khazali apparently believes that the “2030 Agenda” causes all kinds of libertine behavior, because it “removes inhibitions.” How does it “remove inhibitions”?

By promoting the notion that girls and women should be treated equally; this gives them ideas. I still don’t understand how the equal treatment of males and females “removes inhibitions”, and still less, how it explains the pedophilia of a male, homosexual schoolmaster. The logic here is convoluted, Islamic, semi-demented beyond the wit of rational Western Infidels to comprehend.

What we do know is that President Raisi’s appointing the monstrous Ansieh Khazali to be Vice-President for Women and Family Affairs will do great harm to Iranian girls and women. Their inferior status will be confirmed and deepened. They will be discouraged by her office from being educated, or receiving vocational training, for a career outside the house, when pious Muslim women should ideally remain at home. Ebrahim Raisi is pleased with his choice. So is the Supreme Leader Ali Khamenei. As for those girls and women whose lives will be even more severely constricted under the humorless guidance of Ansieh Khazali, why should any good Muslim in the Islamic Republic care what UNESCO thinks?

But the good news it – according most of the analysts and experts on Iran affairs, the mullah regime is almost on the verge of collapse, mainly because of devastated economy and growing size of unemployment and poverty. Pro-democracy and anti-mullah regime forces in Iran and those Iranians in various countries are gradually becoming louder against the cruel Islamist regime. They are demanding in louder voice – mullahs get out of Iran. Yes, Iranians will snatch democracy from the oppressive and cruel regime soon. Ali Khamenei, Ebrahim Raisi and all those killers and oppressors will face trial – soon.