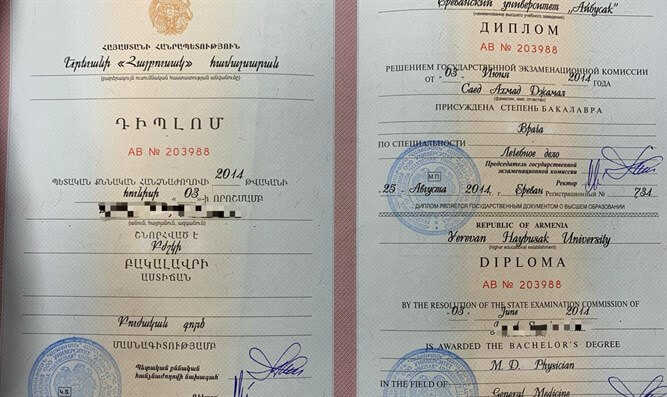 Israeli police on Sunday morning arrested 40 Arab doctors, interns and pharmacists who reside across the country, from Lakiya, a Bedouin town in the south, to Majdal Shams, a Druze town in the southern foothills of Mt. Hermon, north of the Golan Heights, News 0404 reported. All of them are suspected of presenting the Health Ministry with certificates of completion of their medicine or pharmacology studies from universities in Armenia, when in reality they studied there for short periods of time without having completed the required study time.

Using these fraudulent documents to apply to the Israeli health ministry, the suspects received licenses to engage in the medical professions in Israel, police said.

Some even passed the ministry’s certification exams and were hired as doctors or interns in hospitals and other public institutions.

One of the suspects, 30, a resident of Ar’ara south of Umm al-Fahm in the Wadi Ara region in northern Israel, was arrested while on duty as a doctor in the internal department of one of the major hospitals in Israel, police said.

In another case, while a resident of Tira in central Israel who presented himself as a general practitioner was being arrested, his father was arrested for possessing two semi-automatic rifles: one Kalashnikov and one Carlo.

In yet another arrest, the suspect, a dentist who ran a private clinic, turned out to had previously served a prison term for security-related crimes.