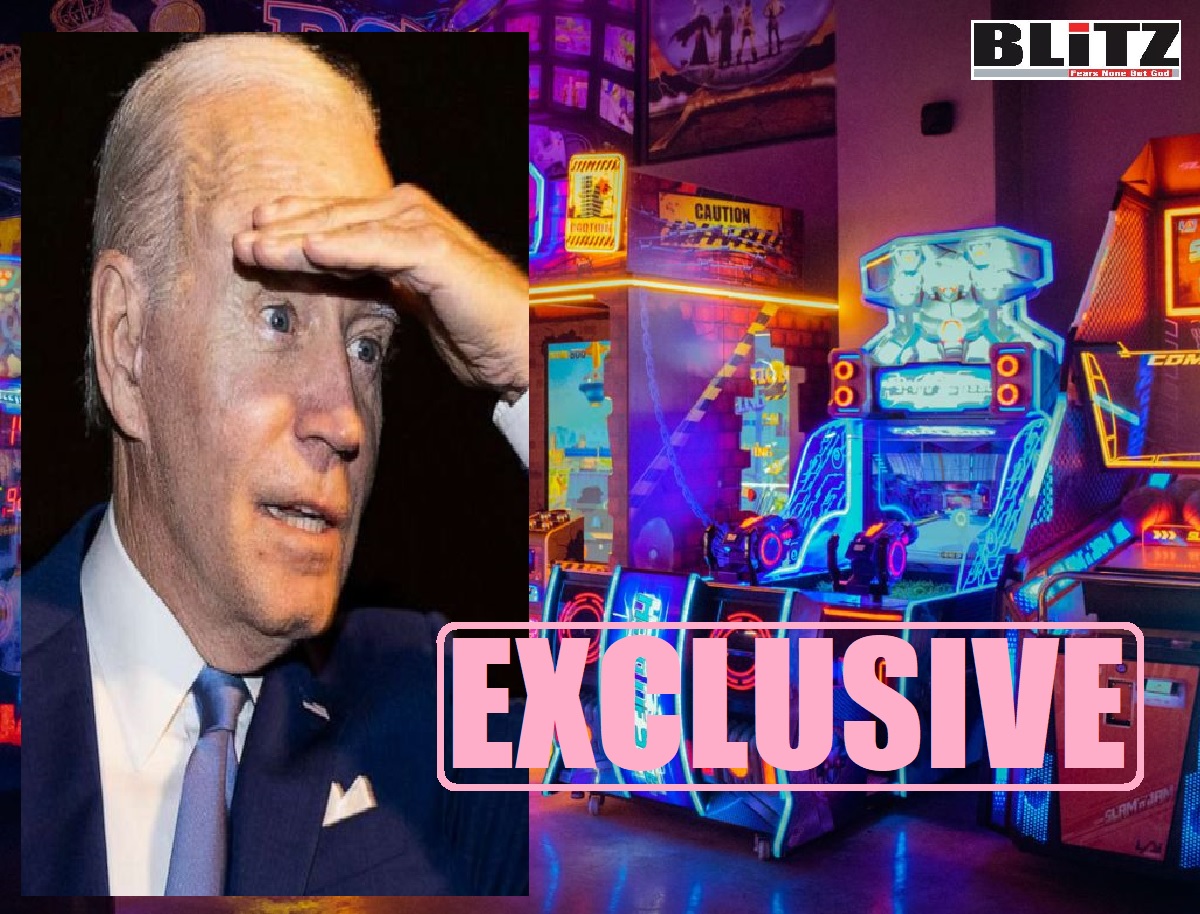 James Gilliar (57), the secret handler of US President Joe Biden’s dirty cash is an MI6 operative, which specializes in counter-terrorism, hostage rescue, and covert reconnaissance, with extreme intimacy with the UAE Royalty, especially Dr. Sheikh Sultan Bin Khalifa Bin Zayed Al Nahyan. Gilliar though lives in Czech Republic with his wife, Erika Erika Krajníková Gilliar and appears to breed race horses, he is an advisor in UAE Sheikh’s business company named S.B.K Holding. But, Gilliar’s listing as an advisor is though is not shown openly, it can only be found on a hidden page in the website of S.B.K Holding.

According to media reports, Gilliar is at the center of Joe Biden’s 10 per cent stake in a dirty deal with China.

James Gilliar wrote an email to Hunter Biden in 2017 suggesting ‘the big guy’ would own a tenth of the interest in a multi-million-dollar deal with Chinese oil behemoth CEFC through his son.

Though the email, allegedly referring to Joe Biden, was perhaps the most shocking among the tens of thousands on Hunter’s abandoned laptop and has the greatest implications for American democracy – still little is known about Hunter’s shadowy business partner.

An investigation of public records shows the 57-year-old James Gilliar is a former advertising salesman from rural England.

But in the span of ten years, Gilliar was mysteriously launched from that modest living into a high-flying extremely posh life, working as advisor to business conglomerate of Dr. Sheikh Sultan Bin Khalifa Bin Zayed Al Nahyan, running a political consultancy with top US government connections, orchestrating a nuclear power deal for the South Korean government, and even breeding racehorses with his glamorous Czech wife, Erika after upping sticks to Prague, BLiTZ can reveal.

A long-time associate and another of Hunter Biden’s business partners in the Chinese deal, Tony Bobulinski, told Laptop from Hell author Miranda Devine that his nickname for Gilliar was ‘MI6’, the British foreign intelligence service to which the fictional spy James Bond belongs.

In another clue evidencing Gilliar’s spy links, the Brit hired a fellow former UK ‘diplomat’ who he said was the former head of MI6’s Middle East division, to help with an energy project in Oman that was part of Hunter’s business deal with the Chinese.

Gilliar wrote in an April 2017 email to Hunter that David Holtom was ‘former MI Six head of region’ and that he had worked with him in the past.

Holtom emailed Gilliar the following month outlining a deal he secured from the Omani government for CEFC after ‘several weeks of negotiating’ covering an ‘infrastructure fund’, fisheries, an oil and gas refinery, ports and tourism.

Gilliar and Holtom’s intimate involvement in Hunter’s Chinese deal is especially intriguing given the role of another British spy, Christopher Steele, in a scandal that dogged America’s last presidency.

Hillary Clinton’s partner Christopher Steele, who wrote the infamous and outrageously false Russia collusion of 2016 presidential election in the United States made false allegations of relationship between Russian government and Donald Trump’s campaign. Steele was assigned by the Democratic National Committee (DNC) and Hillary Clinton.

Christopher Steele had worked as the head of British MI6’s Russia desk.

According to media reports, in the mid-2000s James Gilliar was just an advertising salesman in a rural village in Sussex, England, with a string of failed businesses, an ailing marriage and an interest in horses. Born in 1964, he was the youngest of four children, who later became estranged according to family members.

In his 30s Gilliar lived in a US$490,000 farmhouse in Suffolk, and sent his son to the local private school where his then-wife Claire worked as a Learning Support Assistant.

His first entrepreneurial role was at age 34 was in a marketing company established in 1998 with his father, but which ended up liquidating five years later with almost US$300,000 in debts.

Gilliar’s first marriage with Clair ended in divorce and he was suffering from economic hardship until he migrated to the Czech Republic almost 17 years ago.

According to his biodata, James Gilliar, he worked from 2004 to 2010 as Advisor to the board of oil and gas-focused civil engineering company Bilfinger Berger Middle East, and from 2009 to 2016 as an advisor to infrastructure company Arcadis.

It also reveals that somewhere along the way Gilliar had received ‘specialist training in Civil / Military security operations and analysis, counter terrorism, close protection and firearms, armed and unarmed combat’ and had expertise in ‘Security and intelligence based analytics and systems’.

While working in Dubai, he hired his son to work with him as an IT specialist, and had a second son with his new wife, Erika Krajníková Gilliar.

In 2010 Gilliar founded European Energy and Infrastructure Group (EEIG), boasting ‘strategic influences at the highest level within Washington, DC’ and even ‘represented the foreign ministry of Korea’ on a nuclear power deal, according to the firm’s website.

The website of EEIG describes itself stating: “EEIG is an integration and advisory organisation working with governments and global corporations to solicit business opportunities and facilitate programme delivery through its global network of partners. Our capabilities include e-mobility and the entire battery value chain; renewables; downstream oil & gas; nuclear power plant construction and design support; mining; digital transformationprocess automation; and transportation. EEIG prides itself on being a world class facilitator of large scale projects in these fields. Our customers and partners are global leadersfront runners in their respective sectors and disciplines”.

Mysteriously, the website of EEIG does not mention any physical address or phone number of the company except an email address.

His bio for CEFC says he was an ‘advisor on internationalization’ to the South Korean Foreign ministry 2011-2016, after two years advising the chairman of South Korea’s largest electric utility Kepco.

Gilliar boasts of being ‘top-level former US Department of Homeland Security and Department of Justice officials’ with services including ‘lobbying’ and ‘political intelligence’ and ‘focused on homeland security and transnational trade’.

Through his partner Rob Walker, Gilliar met Hunter Biden. Rob Walker is a former Clinton administration official and his wife, Betsy Massey Walker, served as Jill Biden’s assistant when she was Second Lady.

Gilliar was thrust into the spotlight when Hunter Biden’s laptop, abandoned at a Delaware computer store, was leaked to the press.

Emails from the laptop revealed Hunter had partnered with his brother Jim and three other businessmen including Gilliar to launch a joint venture with Chinese energy giant CEFC, after dangling his family connections to the foreign investors.

The discovery sparked fears that the Chinese government would attempt to use the financial relationship to exert pressure on Joe Biden.

In 2018 CEFC chairman Ye Jianming was arrested on corruption charges in China and his right hand man was convicted of bribery in the US, while Hunter’s deal has landed him under a federal criminal investigation.

In May 2017 Gilliar sent an email to Hunter, Bobulinski and Walker, about proposed ‘remuneration packages’ for the deal.

The British businessman suggested Hunter would receive an US$850,000 salary plus a 20 percent stake in a company that owned half the joint venture with CEFC.

But Gilliar also listed a 10 percent stake to be held by Hunter ‘for the big guy’ – Hunter Biden’s father Joe Biden.

According to a credible source, Gilliar is also involved in many other money ventures relating to Chinese activities, as well as positioning himself to gain from green energy plans being advanced by the Bidens. Within the past two years he received US$15 million in options from the largest lithium mining company in the Czech Republic, European Metals Holdings (EMH), and he is believed to be a key broker between EMH and Chinese funding of the lithium mining venture Cinovec.

Most interesting fact is – despite his heavy involvement in huge projects and direct connections with Joe Biden and his son Hunter Biden, James Gilliar still succeeds in remaining in shadow with no photograph of him on the web. But, we shall surely find one or many soon.

While our investigative reporters have started further digging into the activities of James Gilliar and his business connections with Bidens, we welcome any information with assurance of maintaining secrecy of our source.

BLiTZ will continue investigating the case of James Gilliar and publish more reports on this topic whenever our reporters find through their investigations.