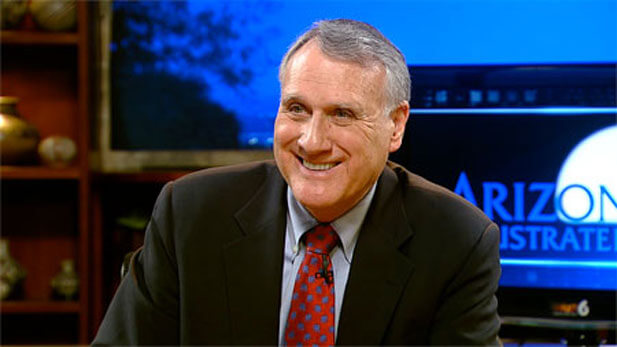 “There is no one in #Arizona with the stature of Senator Jon Kyl,” Ducey posted on Twitter. “With nearly two decades of experience in the Senate—serving alongside John McCain—Senator Kyl is prepared to hit the ground running.”

A longtime friend of Israel, McCain died on Aug. 25 at the age of 81 from cancer. In addition to being an Iran hawk like McCain, Kyl has also been a friend of the Jewish state when he served as a senator from 1995 to 2013.

Members of the Jewish community applauded the announcement.

“All who care about Israel and America are thrilled,” Zionist Organization of America president Mort Klein told JNS. “He is a man of high intelligence, enormous integrity, highly principled and extraordinarily decent.”

“The [Jewish Policy Center] is very pleased by the appointment of Sen. Kyl and congratulates him on returning to the service of our country,” JPC senior director Shoshana Bryen told JNS.

AIPAC representatives also gave favorable reviews of Kyl, saying he has “a distinguished record as a leader advancing the U.S.-Israel relationship, and we look forward to work with him again.”

The National Council of Young Israel echoed that sentiment. “Three times we honored Senator Kyl at our synagogue dinner to thank him for his origination of and leading the passage of the Jerusalem Embassy Act and being Israel’s best friend in the U.S. Senate,” said NCYI president Farley Weiss, who previously served as president of the Young Israel of Phoenix. “He is a person of high integrity.”

“There is no better way to honor the memory of John McCain than by replacing him with another exemplary public servant,” the Republican Jewish Coalition said in a statement. “Much like Senator McCain, Senator Kyl has an exemplary pro-Israel, pro-defense, conservative track record.”

Sarah Stern, the founder and president of the Endowment for Middle East Truth (EMET), said she “could not possibly think of a more qualified individual to try to fill the shoes of the great late Senator John McCain.”

“I knew Senator Jon Kyl well before he entered retirement, and he is an outstanding patriot and also shares Senator McCain’s values, and perceives of America as being a force for good in the world. He believes, as Senator McCain did, in ‘peace through strength, and not through appeasement.’ Senator Kyl also understands that evil, tyranny and despotism exist, and that this great republic has a responsibility to be what President [Ronald] Reagan had once called, ‘that shining city on the hill.’ ”

‘The need to deal with Iran’

Kyl was a staunch proponent of relocating the U.S. embassy in Israel from Tel Aviv to Jerusalem, which U.S. President Donald Trump facilitated in May. The senator authored the 1995 Jerusalem Embassy Act, which required the United States to move its embassy to the capital, which Trump recognized last December as Israel’s.

Additionally, Kyl was an advocate of U.S. funding toward the Arrow missile-defense system and pressured former President Barack Obama against recognizing a unilateral Palestinian state.

In a 2007 interview with The Jerusalem Post, Kyl discussed the Iranian threat. “In all of the years that I have been coming to Israel, one thing stands out to me above all others as crucial to the security of this country—and that is the need to deal with Iran,” the then-senator said.

“The U.S. has been criticized for taking unilateral action in Iraq,” added Kyl. “We would like to see how much support we could get from Europe on Iran to impose very serious and tough economic sanctions. Europe can still put a lot more effort into this.”

Since leaving the Senate, Kyl has served at the powerful Washington law firm Covington & Burling and as a visiting fellow at the American Enterprise Institute.

Kyl “indicated that he would consider staying in the seat longer. … But he has made clear he will not seek to run again,” according to The New York Times.

Like Loading...
Recommended for you:
Continue Reading
Advertisement
You may also like...
Related Topics:A longtime friend, He is a person of high integrity, Senator Kyl, The National Council of Young Israel