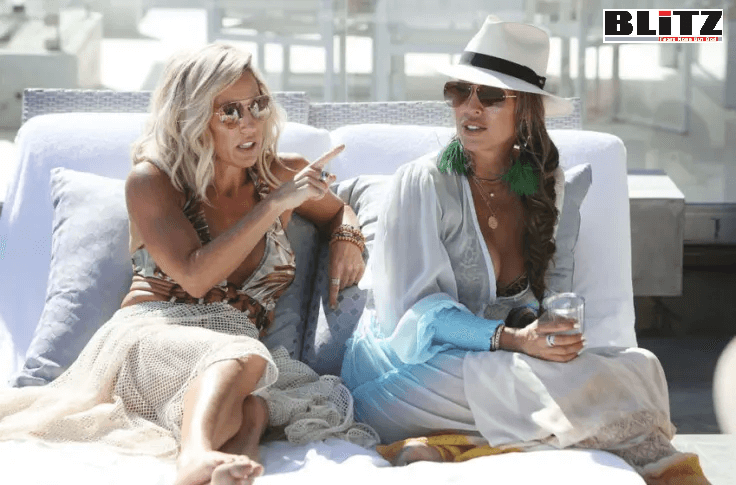 Television reality-show star Braunwyn Windham-Burke, who was on ‘Real Housewives of Orange County’ told reporters, after she had come out as a lesbian, it would be “heartbroken” if her husband were to move on with another woman.

In December 2020, the 43-year-old TV star came out during an interview on a Q&A on the Instagram story. At the time, she also revealed that she started dating a 28-year-old woman named Kris and were maintaining sexual relations with her. However, after coming out as a lesbian, the mom of seven children explained that her husband, Sean Burke, is supporting and they’re working on what to do with their 20-year marriage in light of her revelation.

Braunwyn Windham-Burke revealed that she and her husband want to stay married but acknowledged that the divorce might be in the cards. In response to another question about Sean Burke moving with another woman, the reality TV star said, she would be “heartbroken” if that happens. Sean Burke, who was sitting beside her during the Q&A said, he will likely date other people, but is not sure when.

“Yeah, it kinda sucks cause it’s hard, figuring it out”, he said of the situation of his wife’s lesbian relationship with another woman.

During the Q&A, Braunwyn’s followers called her out for being selfish by barring her husband from doing exactly what she did. The star noted that she is indeed being unfair but explained that is why they are currently in therapy together.

“We are working through this. We can’t figure this out on our own. This is a lot … This is hard and we’re working it out,” she explained.

However, she also noted that she is not keeping Sean from doing anything

or forcing him to do anything he doesn’t want to do. Although unique, they’re both trying to manage their family situation from a place of transparency and honesty.

“I don’t own Sean,” she said in response to a question. “I’ve been like, ‘Go do whatever you want.’ Sean wants to be here. He wants to be with the kids. We are a family so this isn’t anything I’m doing, it’s where we are right now.”

During the interview in which she came out, the reality TV star acknowledged her husband of 20 years and explained that she loves him even if she’s never been attracted to him or any man.

“I love Sean. I love him dearly, he is my person, he is my family. But I’m not attracted to men and I never have been,” she said.

On Instagram, Sean showed his support for his wife. “I love you. I’m proud of you. And I support you. Always,” he wrote on his Instagram Story.

Despite the fact that Braunwyn Windham-Burke now claims to have come out of lesbian sexuality, it is quite certain that she will return to it as psychologically she has no physical attraction towards any man and it may be almost impossible on her part to simply give up her lesbianism.