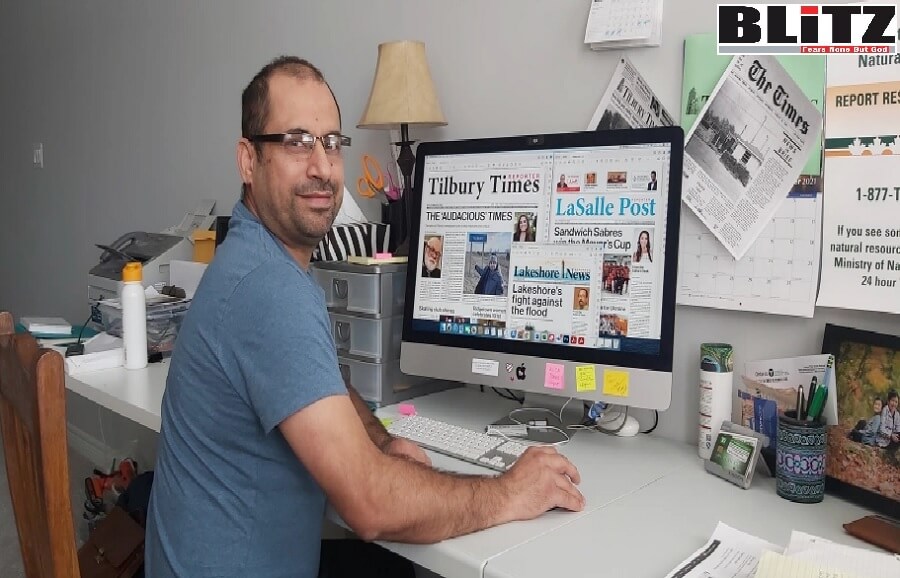 When journalists fee their home country, many of them are forced to leave the profession. Writes Katherine Jacobsen

When reporters flee their home countries, many are forced to leave the profession after finding few opportunities in journalism and facing other pressures in exile. CPJ recently spoke with a Pakistani refugee reporter who not only stayed in journalism, but saved a local newspaper in his adopted country, Canada.

In 2002, Mohsin Abbas was a reporter at the Daily Pakistan when he said he was arrested and abused during then-Pakistani President Pervez Musharraf’s campaign of surveillance and harassment of the press. (Abbas did not share further details out of concerns for the security of family members who remain in the country.)

He fled Pakistan for Canada, where he continued to work in journalism, including for the BBC. Fast forward 20 years, and Abbas took on a new journalistic project this year as publisher of the Tilbury Times, a Tilbury, Ontario, newspaper that was closed in 2020 after its parent company shed several publications due to COVID-19 revenue woes.

The 136-year-old newspaper, which Abbas transformed from a print weekly to a news site, publishes local crime and business news, and international news with a local angle, such as a recent interview with a Canadian family with ties to Ukraine.

“If newspapers disappear, the well-being of the community decreases,” Mohsin, 47, said.

In a phone interview, Abbas spoke to CPJ about restarting the Tilbury Times and the importance of community reporting. The interview has been edited for length and clarity.

Why did you decide to restart the Tilbury Times?

I heard a program on the Canadian Broadcasting Corporation [CBC] about a local newspaper going out of circulation. I felt a [kindred spirit] with the people in the community who wanted their stories to be told. It reminded me of when I was a child in Pakistan and didn’t see my own community reflected in stories from larger publications. Local stories were being lost and so I decided to step in and try to help.

How did you go about reopening it and hiring a staff?

When I first came up with the idea, it felt like nobody believed it would work out: an outsider coming into a small community to revive a paper. We started from scratch. I remortgaged my home to pay for startup costs. I also connected with local non-profits that archived all the previous editions of the Tilbury Times, so we have a sense of legacy. After the CBC published an article about my efforts, more people began reaching out to help: former employees, people from across Canada, and even people overseas.

Have Tilbury residents been welcoming of your initiative?

People have been very supportive. The more we publish, the more engagement we get from locals. People want to see their stories, their concerns reflected in their local paper. I’m learning so many things I never knew— for example, I never realized what a big issue internet connectivity is in rural areas. If we want to stay a strong democracy, we need to have local newspapers. Local news is an important pillar of society.

It’s about telling people’s stories. We’re not making a lot of money, but we’re making an impact. We’re able to inform people outside of Tilbury about the town. We’re getting clicks on the newspaper’s website from people in Toronto and the United States. We’re opening people’s eyes about the town and new opportunities in it. The local community has also [rallied behind] the paper. The more we publish, the more locals who are writing in with questions and things they want us to look into. It’s very satisfying experience.

Katherine Jacobsen is CPJ’s U.S. and Canada program coordinator. Before joining CPJ as a news editor in 2017, Jacobsen worked for The Associated Press in Moscow and as a freelancer in Ukraine, where her writing appeared in outlets including Businessweek, U.S. News and World Report, Foreign Policy, and Al-Jazeera.