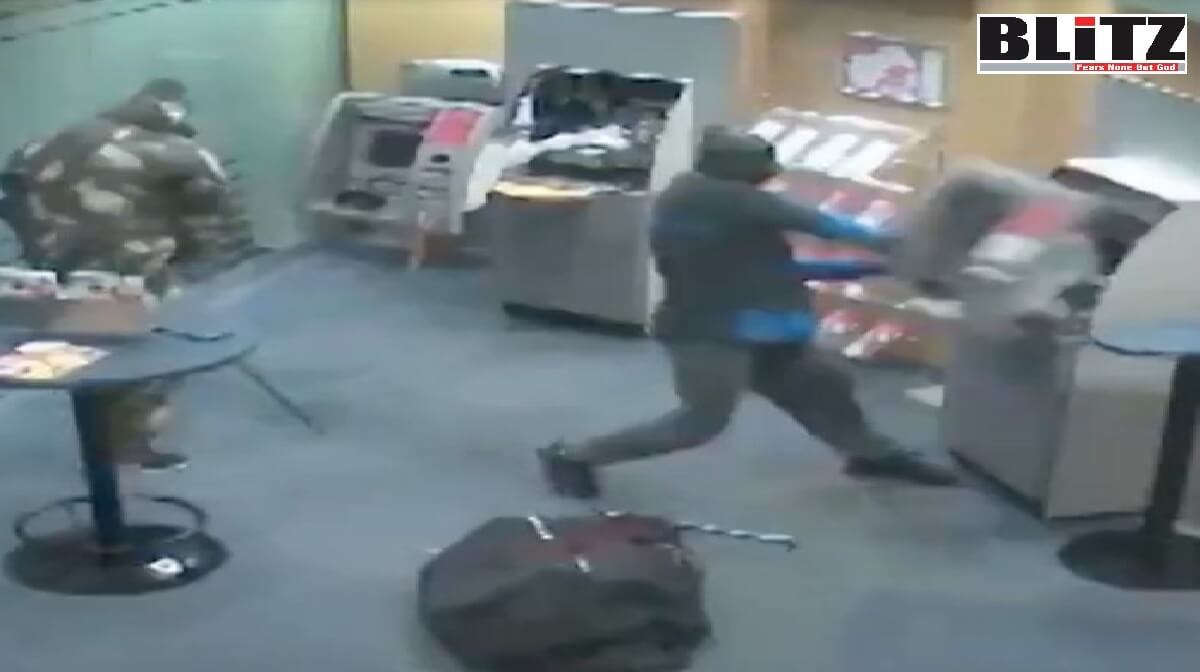 Organized demolition crews, mostly made up of Moroccan migrants, are putting German lives at risk with their high-explosive ATM heists. Writes Hugh Fitzgerald

Muslim migrants — economic migrants who pretend to be asylum seekers — come to Europe hoping to take advantage of every benefit the rich welfare states of the Continent offer: free or greatly subsidized housing, free medical care, free education, family allowances, unemployment benefits (even without having to have been employed previously). These migrants are in no hurry to be employed; if they find they need more money than the state provides, they turn to street robberies, house burglaries, and the drug trade. Why should Muslims, the “best of peoples,” not help themselves to the wealth of the “most vile of created beings,” the Infidels? And naturally, the sums the state provides, or that are taken by Muslim criminals from their Infidel victims, should be seen as a kind of proleptic jizyah.

Now Muslim migrants, mainly from Morocco, have found a new and most profitable way to make money: they blow up ATMS in Germany, and make off with the wads of cash stored in their innards. More on this story can be found here: “500 ATMs blown up by migrant gangs in Germany in 2022, setting a new record,” by John Cody, Remix News, January 16, 2023:

In Germany, this past year a new record was set: 500 ATMs were blown up by migrant gangs, a new record.

Organized demolition crews, mostly made up of Moroccan migrants, are putting German lives at risk with their high-explosive ATM heists.

Organized criminal gangs active in the Netherlands and France, mostly made up of Moroccan migrants, are blowing up ATMs in Germany at a record pace in highly professional robbery operations. In 2022, government statistics indicate that they blew up 500 such machines, with statistically more than one machine being blown up every day.

Cash remains popular with Germans, and to feed this demand, banks operate nearly 100,000 ATMs located throughout the country, with the machines routinely containing between €50,000 and €100,000. Criminal gangs are taking advantage of this, and they are willing to use extreme methods to gain access to this money. These criminal networks are said to meticulously plan their operations out, including initial surveillance, demolition, and the getaway. Police also say they act with brutality and ruthlessness, putting human lives at risk.

Think of how much money these gangs are making off with. If ATMs in Germany contain, on average, 75,000 euros, and in 2022 500 ATMS were blown up and their cash contents made off with, that amounts to a total of 37.5 million euros stolen in Germany alone. And since these Moroccan gangs are also to be found in the Netherlands and France, nothing is keeping them from blowing up ATMs in those countries as well.

In fact, these migrant gangs are blowing up banks with such powerful explosives, that they are destroying entire buildings. In some cases, they have blown bank vault doors up to 30 meters away, underlining how powerful these blasts can be. Police say the danger facing Germans is unprecedented, as many of these banks are located in residential buildings.

The explosives are so powerful that they have blown the steel doors off the ATM machines, causing them to fly upto ninety feet away. The physical damage is thus not just to the destroyed ATM; there is also great destruction around the ATMs, in the buildings where they are located. To the estimated $37.5 million euros stolen last year from ATMs, one has to add the many millions of euros in damages to the buildings in which the ATMs have been placed. And anyone hit by a flying ATM door or other metal debris, will almost certainly be killed, though that has not happened yet.

Although the final number of such bank heists has not yet been released for 2022, according to police sources obtained by Welt Am Sonntag, there were 500 such attacks, reaching a record high. Germany’s interior ministry is now holding high-level meetings on the issue, but it appears the robbery crews show little sign of slowing down. In 2021, the Federal Criminal Police reported that there were 414 cases of attempted or successful demolitions, while 2020 saw similar numbers.

Authorities describe how the gangs are most active in the west of Germany, with the most populous state, North-Rhine Westphalia, along with Lower Saxony, the most popular targets. For one, these regions are the closest states to the Netherlands, where the gangs are most active — although some gangs also operate out of France, which is also nearby.

The Moroccans are the most numerous Muslim migrant groups in the Netherlands, and the second most dominant in France, after the Algerians. It is not known why they have chosen those countries as their base of operations, where they plan their ATM attacks in Germany, instead of in Germany itself. And why did they start by hitting German ATMs? Perhaps it is because Germans are more wedded to using cash than other Europeans, and are known to use ATMs more frequently; possibly the German machines contain more cash than ATMs in other countries. But Moroccan gangs will no doubt soon be exploding the ATMs in the Netherlands and France as well, if they haven’t already done so.

The gangs tend to target banks located close to major motorways in order to make a quick getaway, with most banks targeted in the early morning hours when the roads are mostly empty.

They usually work in teams with each member playing a specific role. In one case near the small town of Heusenstamm in Hesse, the gang doused garbage bins in gasoline and set them on fire in the middle of the road, effectively creating a roadblock for both lanes of traffic. This roadblock would later hinder the police from pursuing the getaway vehicle.

These Moroccan gang members are thoroughgoing professionals, who have thought of everything, from the amount and kind of explosives needed to blow open a particular ATM, to choosing ATMs that are close to highways so as to ensure themselves a quick escape, to creating roadblocks that can prevent the police from pursuing them.

Another two men, wearing face masks and tracksuits, pried the door open of the Commerzbank. They were filmed breaking open the ATM’s cash slots and then using a hose to fill the machine with acetylene and oxygen, which serve as the two ingredients for their bomb.

Another individual who then detonated the bomb was in a BMW 320d behind the bank [far away from the explosion].

The men worked “with the precision and speed of a racing team at a pit stop,” according to Welt.

However, that is just one incident. Such explosions are rocking Germany nearly every night, and often the damage is far worse than thousands of euros lost from the machines.

A report from Die Welt details how powerful explosions have badly damaged buildings and led to residents being evacuated from their homes. Videos of explosions in buildings, supermarkets, and other public spaces routinely run on German news the next morning.

In one court trial for a gang member police managed to arrest, a judge from Hesse described “war-like damage” in German inner cities during sentencing. Police investigators from the prosecutor’s office described the gang as conducting “explosive attacks in public spaces.”

As a result, the line between robbery and terrorism is beginning to blur in such cases.

“It’s a miracle that there haven’t been any deaths yet,” says Swen Eigenbrodt, the lead investigator of a special new unit in the Hessian State Criminal Police Office (LKA). The unit has been actively targeting the gangs who have participated in the ATM heists seen in the state….

The enormous damage these explosives do to the buildings where the ATMs are placed far exceeds the estimated 37.5 million euros in cash that were taken from the machines in 2022. These explosive attacks result in a “war-like damage” that can leave buildings badly damaged – shops, offices, supermarkets, residences, nothing is spared. How much is the real cost to society of these exploding ATMs? For each of those 500 ATMs blown open, and 75,000 euros in cash stolen, there is in addition an average of 50,000 euros in damage to the buildings in which the ATM is located. Remember, these are very powerful explosives that can blow an ATM steel door up to 90 feet away, and 50,000 euros of collateral damage is a most modest estimate. That would make for physical damage of 25 million euros, on top of the stolen cash worth 37.5 million, for a total of 62.5 million euros. And these attacks are on the increase, both in Germany, and in other European countries.

ATM robberies have been such good business that one crime boss even set up a “training” facility for demolition gangs, where they can learn the tricks of what has become a most lucrative trade. Unwilling to engage in honest labor, these Moroccan gangs use a small part of their ill-gotten gains to buy villas back home, where they plan to take an early retirement. And they feel no shame for any of this; they are taking money, remember, from the Infidels.

Some of the money they steal from the German ATMs is used to set themselves up in the Dutch cocaine trade. The Netherlands is famously easygoing about drugs; if they are caught, sentences are far lighter than in Germany. And the returns are huge.

The Moroccan Mafia even dares to defy, and threaten, the Dutch state. In the Netherlands, it makes billions of euros each year from its control of the drug trade. Such colossal sums can buy off corrupt officials, including police; it can also pay for the best defense lawyers. The Moroccans are ruthless; they kill state witnesses, and journalists who dare to write about their crimes as well. Just a handful of such murders of witnesses or journalists quickly silence all the rest. This past October, the Dutch King and Queen revealed that their daughter, the Princess Amalia, in her first year at university, had had to leave her student accommodations and return home to live, where heavy security could be provided. She had been the object of kidnapping and death threats by Moroccan gangs, who no doubt would like to exchange her for some of their fellow gang members now in Dutch prisons. It is quite a testament to the power and ruthlessness of Muslim migrant gangs that they have forced a member of the royal family to remain inside the palace.

This is a snapshot of the colossal damage done by gangs of Moroccan migrants in Germany. And it is a snapshot, too, of the Moroccan drug traffickers in the Netherlands, who make billions of euros a year in revenues, and have become strong enough to kill witnesses and journalists with impunity, and now even threaten the Dutch royal family.

That is what a small segment of the Muslim migrant population has meant to one part of Europe. What will happen when there are millions more such migrants, just as eager to live off the many benefits the Europeans still insist on offering, and prepared to supplement that proleptic jizyah with the take from robberies, burglaries, the drug trade, and blown-up ATM machines?