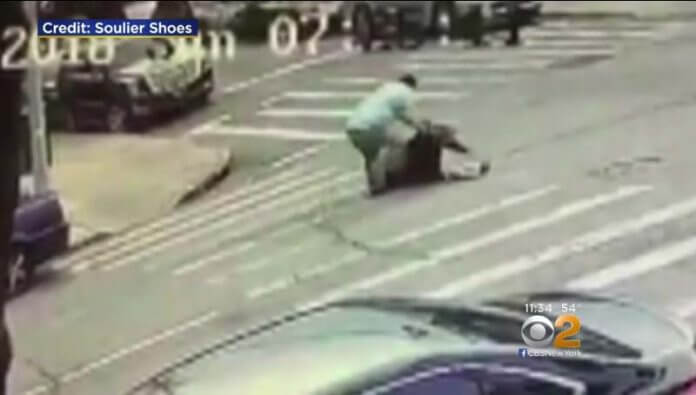 According to New York Police Department (NYPD), the horrifying attack on an elderly Chassidic man in Brooklyn Sunday morning was a case of mistaken identity – the attacker thought his victim was the Chassidic man who had hit his car at a red light moments before.

Farrukh Afzal, 37, a livery driver from Staten Island, has been charged with assault, hate crime, criminal mischief and harassment, for a brutal assault on Leopold Schwartz, 62, a Chassidic Jew from Borough Park, Brooklyn. The entire disturbing event, reminiscent of anti-Semitic assaults in Poland and Germany, was recorded by CCTV cameras.

The videos show a black livery car parked hastily by the curb and the driver rushing out of it and attacking the unsuspecting Schwartz, who manages to escape, only to be caught and pummeled again. A passer by tries to intervene, only to be chased by the crazed Afzal.

“I was like this. And all of a sudden… boof, boof, boof, boof!” Schwartz told CBS News. “So I start to fight back because it’s either death or life.”

State Assemblyman Dov Hikind expressed the feelings of every New Yorker, when he said that “watching the video of the incident or just hearing about it is traumatizing, especially to children and the elderly here, many of whom survived the Holocaust. Thank God this guy is off the streets. This isn’t the wild west, this is Borough Park. We won’t allow violent, hateful behavior taking place on our streets.”