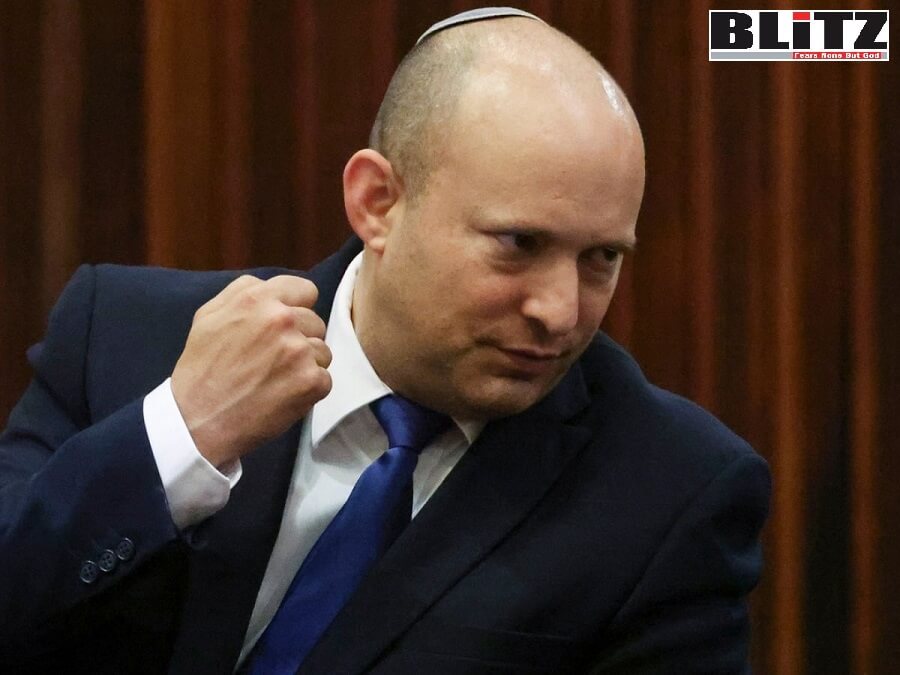 You don’t need to negotiate the establishment of a terror state in the heart of Israel. You can simply raise the money to establish one, give its leaders control of the territory they will need to attack Israel and convince the international community that Israel wants them to fund Palestinian terrorism. This is what Bennett is doing. Writes Caroline Glick

Standing at the speaker’s rostrum at the Knesset two weeks ago, Israeli Prime Minister Naftali Bennett declared: “There are no negotiations taking place towards the establishment of a terror state in the heart of Israel.”

Bennett was compelled to make this declaration because the political opposition insists that the opposite is the case. Bennett’s former political partner, Knesset member Bezalel Smotrich, gathered the requisite 40 signatures to compel Bennett to appear before the Knesset last week and answer questions. Smotrich and his fellow opposition members believe that Bennett’s far-left-dominated government is moving swiftly to establish a Palestinian terror state in the heart of Israel.

Events last week indicated that despite Bennett’s denials, the opposition is right.

In Oslo, Norway, last Wednesday, the so-called Ad Hoc Liaison Committee convened for its semi-annual conference. The AHLC is a consortium of donor governments that support the Palestinian Authority. It was founded in 1993, immediately after the Israeli-PLO peace process was formally inaugurated on the White House lawn. The peace process was dubbed the Oslo process because the secret talks that led to the official peace process were initiated in Oslo.

The AHLC serves a double purpose. Donor governments raise funds to finance and maintain governing mechanisms and institutions in the PLO-controlled Palestinian Authority. Those institutions and mechanisms are supposed to serve as the foundation of a future Palestinian state. The donor countries also fund projects geared towards developing the Palestinian economy.

Since 1993, through the AHLC and other international donor mechanisms, the Palestinians have received more foreign aid per capita than any nation has received in history. Despite this, the P.A. never formed a functioning economy. Yasser Arafat, his successor Mahmoud Abbas and their cronies opted instead to use the funds to form a terror-sponsoring kleptocracy.

As more and more donor nations realized they were being had, AHLC funding of the P.A. plummeted by some 80 percent over the past decade. Whereas in 2011 donor nations gave the P.A. $1.3 billion, in 2020 the sum had dropped to $500 million. This year, the P.A. is only expected to raise $184 million.

Most European aid to the P.A. has been frozen. Investigations of the use of those funds showed that 40 percent of donor funds to the P.A. did not reach the intended recipients. They also showed direct links between E.U. funds and Palestinian terrorism.

Aside from Qatar, which funds Hamas in Gaza, Arab states have largely stopped bankrolling the P.A. In retaliation for Palestinian condemnation of the Abraham Accords, last year Arab states ended all assistance to the P.A. Although it was reinstated this year, the amounts being transferred are a fraction of what they were in the past. In 2019, Arab donor governments gave the P.A. $265 million. This year, funding of the P.A. stood at $32 million.

The Europeans and Americans didn’t just wake up one morning and decide to stop funding the terror-sponsoring, corrupt P.A. Their decisions were the product of a decade of painstaking work by the Netanyahu governments to persuade them that money for the P.A. was money ill-spent.

For the past generation, the Israeli left has insisted that it is possible to support the PLO and oppose Palestinian terrorism at the same time. This contention was the main rationale for the Oslo process. But as the massive increase in Palestinian terrorism since the establishment of the P.A. in 1994 proved incontrovertibly, the opposite is the case.

During Benjamin Netanyahu’s long tenure as premier, supported by Israeli NGOs, the government devoted great efforts to persuading the U.S. Congress, and the Obama and Trump administrations, that the United States should end its financial support of the P.A. They did the same thing with European governments and parliaments. Their relentless work made it impossible for the Americans and the Europeans to shut their eyes to the P.A.’s massive embezzlement of funds and diversion of billions of dollars to finance and incentivize terrorism.

But today, Bennett is using his declaration that no negotiations are being carried on to hide the fact that the actions he and his ministers are taking have the same effect as negotiations. They are dismantling everything the Netanyahu governments achieved. Netanyahu’s moves to prevent the P.A. from having the financial wherewithal to wage a terror campaign are being undone. His efforts to deny the Palestinians the geographical and political means to establish a terror state in the heart of Israel are also being reversed.

Israel’s delegation to the AHLC in Oslo is headed by Regional Cooperation Minister Esawi Frej. Frej arrived in Oslo several days before the conference opened to join P.A. Prime Minister Mohammed Shtayyeh in lobbying the Europeans, Arabs and Americans to give more money to the P.A. Frej and Shtayyeh are asking donors to make multi-year commitments that will provide the P.A. with a billion dollars a year.

Frej isn’t the only Israeli cabinet minister fundraising for the P.A. Defense Minister Benny Gantz is also in on the action. Haaretz reported last week that Gantz dispatched his senior adviser, Zohar Palti, to Washington to ask the Biden administration to pressure European and Arab governments to increase their contributions to the P.A. and to fund major projects geared towards expanding the Palestinian economy.

Led by the anti-Israel Rep. Andy Levin, a group of Congress members are currently pushing a bill that calls for the United States to disregard the Taylor Force Act and reopen the PLO representative office in Washington and reinstate funding for the P.A. Both moves are prohibited under the law because the P.A. continues to pay salaries to terrorists and pensions to the families of dead terrorists. How can Israel, which is lobbying governments worldwide to fund the terror-financing P.A., object to their bill?

The purpose of massive Palestinian construction in the area isn’t to alleviate overcrowding in P.A.-controlled Areas A and B. Those areas are not overcrowded. The purpose of Palestinian construction in Area C is to transform all Israeli communities from relatively safe, flourishing villages, towns and cities into isolated enclaves vulnerable to terror assaults like never before. Palestinian domination of Area C will also turn Israeli cities like Jerusalem and Kfar Saba into border towns, much like the bombarded towns and villages bordering Gaza.

Frej and Gantz’s fundraising partner Shtayyeh is generally presented to westerners as a moderate technocrat because of his university-educated English. But Shtayyeh’s positions are just as fanatically anti-Semitic and bellicose as any garden-variety jihadist. In a speech to delegates at the P.A.’s ruling Fatah faction’s annual conference in July, Shtayyeh argued that the Jews have no ties to the land of Israel or the biblical nation of Israel. Contemporary Jews, he said, are descendants of the sixth-century Russian Khazars.

At the climate change conference in Glasgow earlier this month, Shtayyeh adapted the age-old “Jews poisoning the wells” blood libel to his contemporary context. Israeli communities in Judea and Samaria, he said, were polluting the natural resources of “Palestine.”

In what he thought was an off-record briefing for Israeli Arab journalists in late September, Shtayyeh said that if Israel didn’t bow to all of the PLO’s territorial and political demands, then the P.A. would join forces with Israel’s Arab minority, form a unified leadership and wage a war to destroy the Jewish state.

This brings us to Shtayyeh’s boss, P.A. chairman and PLO chief Abbas. In September, Abbas gave Israel an ultimatum at the U.N. General Assembly. He said that Israel has a year to surrender Judea, Samaria and Jerusalem. If it fails to do so, the PLO will renounce its recognition of Israel’s right to exist. In other words, he told Israel that if it fails to surrender, the P.A. will renew its terror war against the Jewish state.

The Bennett government’s reversal of Netanyahu’s policies was supposed to usher in a new era of friendship between Israel and the Democrats and post-nationalist western Europeans. But the opposite has happened. While Biden is happy to ignore the Taylor Force Act and finance the P.A., his administration grows more hostile to Israel by the day.

Two weeks ago, the United States abstained in a U.N. General Assembly vote on a resolution endorsing the so-called “right of return” of Palestinian “refugees.” As the Biden administration understands well, the Palestinian demand for a “right of return,” or unfettered immigration of millions of foreign-born Arabs to Israel and the PA, is a demand for Israel’s destruction. If the Jewish state is flooded with millions of Arab immigrants, it will be undone.

So, while Israel’s government is running around the world raising money for the establishment of a Palestinian terror state, Washington no longer can say whether it supports Israel’s existence.

When seen in the context of his government’s actual policies, it is clear that Bennett’s statement at the Knesset was a head-fake. You don’t need to negotiate the establishment of a terror state in the heart of Israel. You can simply raise the money to establish one, give its leaders control of the territory they will need to attack Israel and convince the international community that Israel wants them to fund Palestinian terrorism. This is what Bennett is doing.