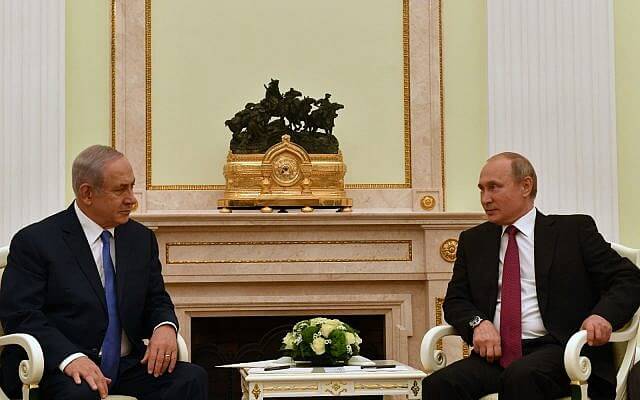 Israeli Prime Minister Benjamin Netanyahu said Sunday that he will soon meet with Russian President Vladimir Putin to discuss coordination between the Israeli military and Russian forces operating in Syria.

Netanyahu’s announcement came with ties to Moscow strained over Russia’s recent delivery of its advanced S-300 air defense system to Syria. Israel and the US are concerned the delivery of the system could complicate ongoing Israeli efforts to prevent Iran from deepening its military presence in Syria and transferring weapons to Hezbollah.

“A short time ago I spoke with President Putin. We agreed to meet soon in order to continue the important inter-military security coordination,” Netanyahu said at the start of the weekly cabinet meeting at the Prime Minister’s Office in Jerusalem. “Israel will act at all times to prevent Iran from establishing a military presence in Syria and to thwart the transfer of lethal weapons to Hezbollah in Lebanon.”

The two men last met in July in Moscow, and also discussed the situation in Syria.

Russia’s delivery of the the S-300 system to Syria follows the downing of a Russian spy aircraft by Syrian forces, which were responding to an Israeli strike over Syrian airspace. Russia has blamed Israel for the incident, which killed 15 Russian crew members.

Since the downing of the IL-20 spy plane on September 17, Israel’s relationship with Moscow has rapidly deteriorated.

Although Putin initially told reporters that the incident was due to a “chain of tragic accidental circumstances,” the Russian defense ministry later declared Israel was responsible, saying the IAF jets used the Russian plane as cover.

Israel and its allies for years have lobbied Russia not to give Syria and other regional players the S-300 system, arguing that it would limit Israel’s ability to neutralize threats, including by the Lebanon-based group Hezbollah.

The S-300 system, considered one of the most advanced in the world, has a radius of some 200 kilometers, meaning a battery placed near Damascus would cover much of Israel.

Israel has repeatedly said it will not allow Iran, or its Shiite proxies, to establish a permanent presence in postwar Syria. It has launched numerous attacks on targets it says are a threat to its security.

Russia, which is a main backer of Syrian President Bashar Assad, has maintained a deconfliction hotline with Israel, allowing the Jewish state to carry out the attacks as long as it is informed beforehand.

Last Thursday US General Joseph Votel, who heads the US Central Command, called the Russian S-300 deployment in Syria a “needless escalation.”

Moscow has reportedly been working to open avenues of communication between Jerusalem and Tehran to reduce tensions and friction in Syria. Citing a senior Russian source, the London-based Arabic daily Asharq Al-Awsat reported Saturday that this came in light of Moscow’s decision to provide the Assad regime with the S-300.