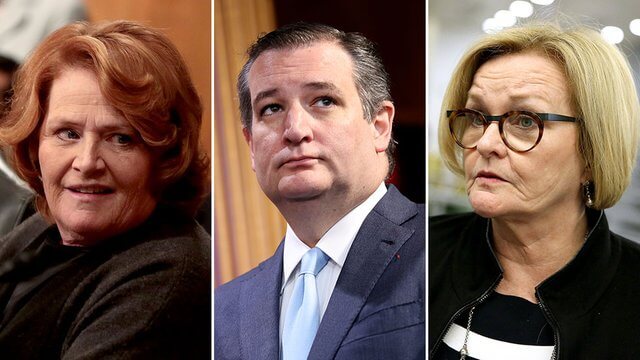 Republicans are increasingly optimistic about their chances of expanding their narrow Senate majority in the wake of the polarizing confirmation battle over Supreme Court Justice Brett Kavanaugh.

In the weeks since a series of sexual misconduct allegations were raised against Kavanaugh, the GOP has seen candidates in the Republican strongholds of Texas and Tennessee strengthen their positions, putting possible upset bids by Democrats on hold.

Republicans are increasingly bullish on their chances of gaining a seat in North Dakota, where Sen. Heidi Heitkamp (D) has seen Republican Rep. Kevin Cramer pull ahead in polls. They also believe they can defeat Sen. Claire McCaskill in Missouri. Both Democrats voted to confirm Kavanaugh.

“If you look at the polling we’ve seen in the last four or five days, it’s become clear that states like North Dakota and Missouri are moving in the Republicans’ direction,” said Matt Mackowiak, a GOP strategist.

“Most importantly, the opportunity that existed for Democrats in Tennessee and Texas looks like it’s on the way out.”

In Arizona and Nevada, widely seen as the best pickup opportunities for Democrats, recent polls suggest that the GOP is holding its own.

While most other recent polls show Sinema with a narrow lead, the race to succeed retiring Sen. Jeff Flake (R-Ariz.) appears to be tightening. A Fox News poll conducted around the same time as the OH Predictive Insights survey showed Sinema ahead by 2 points – well within the poll’s 3.5-point margin of error.

In Nevada, an NBC News/Marist poll released earlier this month put Sen. Dean Heller (R-Nev.) ahead of his Democratic challenger, Rep. Jacky Rosen (Nev.), by 2 points. Heller has long been seen as the most vulnerable GOP Senate incumbent.

“I think Senate races are tightening and that’s not a real surprise,” said Doug Thornell, a former deputy political director for the Democratic Senatorial Campaign Committee (DSCC). “As you get closer to an election, that typically happens. There’s more information that voters take in and on both sides see enthusiasm grow.”

The GOP’s best chances for picking up seats look to be in North Dakota and Missouri, but the party also sees opportunities in Montana and Indiana, two states Trump won easily in 2016, as well as Florida, another state won by Trump where Republicans have a strong candidate in Gov. Rick Scott.

West Virginia is another pick-up chance, though Sen. Joe Manchin, the only Democrat to vote to confirm Kavanaugh, is holding on strong in polls. The Cook Political Report moved that race into the “Lean Democratic” column last month.

Republicans also see a longshot chance of flipping New Jersey, a deep-blue state that Hillary Clinton carried by 14 points in 2016.

A Stockton University released earlier this month showed a statistical dead heat in the race between Sen. Bob Menendez (D) and his Republican challenger Bob Hugin, with the incumbent Democrat carrying only a 2-point lead. Menendez was reprimanded by a Senate ethics panel in April after federal prosecutors dropped corruption charges against him.

Republican officials and operatives argued that the bitter fight over Kavanaugh’s confirmation has boosted their chances. They are hoping that the fight will energize their base in November in a year when Democrats have largely held an edge in voter enthusiasm.

At the same time, they say they are not taking anything for granted, and acknowledge the political winds can change quickly.

“Heidi’s never going to be done for,” one North Dakota Republican operative said. “Part of that is this state is cheap. A little bit of money can have a lot of impact. She’s a fighter, and she’s got nothing left to lose.”

In Texas, Sen. Ted Cruz’s (R) polling numbers are on the rise. Two recent surveys by Emerson College and CBS News/YouGov showed the conservative firebrand pulling ahead by 5 and 6 points, respectively, over Rep. Beto O’Rourke (D-Texas).

In Tennessee, Rep. Marsha Blackburn (R) held a 5-point lead in a Fox News poll earlier this month over former Tennessee Gov. Phil Bredesen. Another poll by CBS News/YouGov showed her ahead by 8 points.

In Florida, Sen. Bill Nelson (D) has seen his numbers rebound in recent polls against Scott. Hurricane Michael has introduced a new uncertainty to that race.

Democrats have expressed optimism that the partisan fight over Kavanaugh will pump up their base.

“I think the pathway to the majority was always going to be difficult for Democrats,” Thornell said. “This is one of the most treacherous senate maps either party has had in years. But it’s still in play because our incumbents are running strong campaigns and we have put the GOP on defense in four states.”