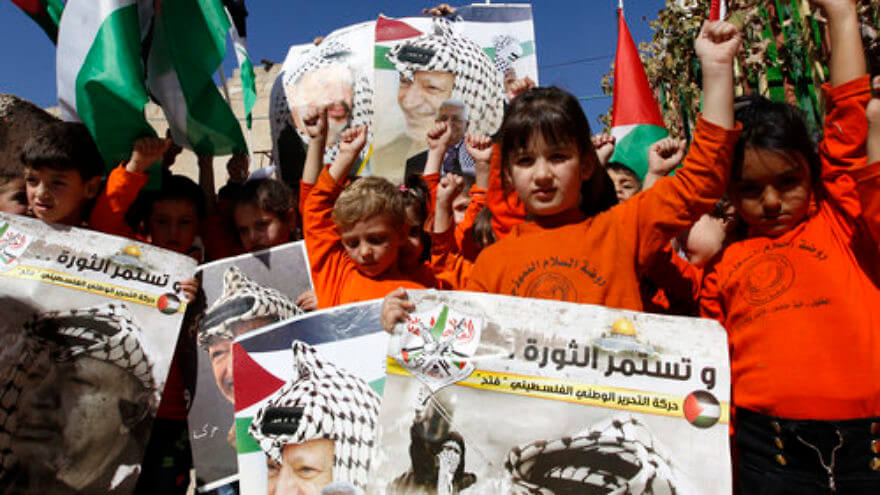 A new study on Palestinian textbooks found that the Palestinians still support terror and destroying Israel, and funnel misinformation to their children, which doesn’t exactly surprise Israeli experts.

The four-year study by the Israel-based Meir Amit Intelligence and Terrorism Information Center found that after examining 364 Palestinian Authority schoolbooks for grades one through 12 from the years 2013 to 2018, children are still learning that a peaceful resolution to the Israeli-Palestinian conflict is not an option.

Col. (res.) Dr. Shaul Shay, a former deputy head of the National Security Council of Israel, who today serves as director of research at the Institute for Policy and Strategy at the Interdisciplinary Center in Herzliya, told JNS that he is not surprised by the findings of the study demonstrating that Palestinian textbooks continue to incite against Israel and Jews.

“One of the major problems with our relations with the Palestinians is that our expectation was that the Palestinians really wanted to put an end to the conflict, and not just go through a political process between the two parties,” he said. “Unfortunately, it didn’t happen, and I don’t see it happening in the near future.”

“The Palestinian media and textbooks all push the same consistent message because there is an expectation that this is what the Palestinian street wants,” explained Shay.

Shay puts the P.A. incitement into the context of its competition with Hamas for power in the Palestinian territories. “So, to expect the P.A. to suddenly turn 180 degrees in the opposition direction is not realistic.”

The Israeli expert noted that the same arguments about the conflict were going on when former Palestinian leader Yasser Arafat was alive. Arafat spoke differently when he spoke to different audiences—in one way in English and the other in Arabic. Palestinian leader Mahmoud Abbas is similar in this way, he added.

Researchers at the Meir Amit center were disheartened to find continued material in textbooks that relate to incitement against Jews and Israel. One such reference found in the history-studies book for grade 11 mentions the “1972 Munich operation,” where 11 members of the Israeli Summer Olympics team were murdered. “Those who carry out such actions are called ‘self-sacrificing ones [Fidais]’ and those among liberation struggle is liberating the Muslim holy place of Al-Aqsa Mosque in Jerusalem from the Jews’ sway.”

The struggle is not limited to the West Bank and Gaza, but includes the entire area of Israel from the Jordanian River to the Mediterranean Sea, continued the report. “Even Israel’s very name is replaced in the text in the vast majority of cases by ‘the Zionist Occupation’ or ‘the Zionist Entity,’ which should be extirpated from the Middle East (History Studies, Grade 12).”

Ido Zelkovitz, head of the Middle East Studies program at Yezreel Valley College and a policy fellow at Mitvim think tank, says that incitement in Palestinian media and textbooks continues regardless of the U.S. administration decision to cut funding to UNRWA, the U.N. agency charged with Palestinian relief.

“The political culture in Palestinian society is against Israel and in a state of mind that is not interested in compromising,” he said, going on to add that “the struggle over the textbooks is important, but not the main issue, which is the human dimension.”

He explained his opinion by pointing out that U.S. President Donald Trump will not be able to dictate to the Palestinians what their children can study.

“If the Palestinians are going to change their state of mind, it must be their own decision, and I don’t see that happening in the short- or long-run,” said Zelkovitz, a senior research fellow at the Ezri Center for Iran & Persian Gulf Studies at the University of Haifa.

The Israeli expert dismisses the chance of financial pressure changing Palestinian attitudes, noting that they will simply turn to Europe or elsewhere for funds.

“It would take at least 40 years to change Palestinian attitudes, and to do this, the education curriculum must be altered,” he added.

The European Parliament’s Budgetary Control Committee is supposed to vote on whether to freeze more than 15 million euros ($17 million) in aid to pay for school textbooks for the Palestinian Authority unless it removes incitement against Israel.

The Institute for Monitoring Peace and Cultural Tolerance in School Education, or IMPACT-se, which has analyzed the new Palestinian textbooks, presented a report to the European Parliament, noting that the P.A. “encourage[s] Palestinian children to sacrifice their lives in the name of religion,” and “glorified martyrdom and violent resistance.”

Zelkovitz does think that the Trump strategy of allying with Sunni Arab states such as Saudi Arabia and Egypt to pressure the Palestinian leadership could produce results.

Asked where he sees the endgame going, he responded that he still believes the two-state as “the best solution.”

Pressed on the viability of the two-state solution and the talk of out-of-the-box alternative, Zelkovitz replied: “I don’t deny that the Palestinians, if they could, would push for a one Palestinian state solution without Israel.”

Still, he thinks the Palestinians may eventually be able to create a narrative of peace because without it, “they will never achieve their main goal of establishing a Palestinian state.”