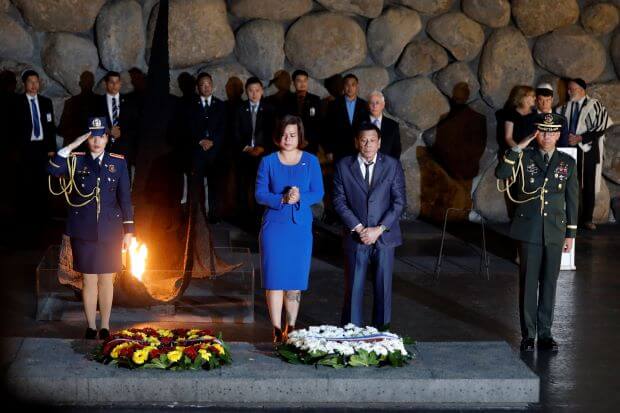 Philippines President Rodrigo Duterte, who once likened his crime-fighting policy to Hitler’s mass murders and then apologised for the comparison, on Monday laid a wreath to commemorate the Holocaust dead in Jerusalem.

During his visit to Yad Vashem, Israel’s Holocaust memorial and museum, Duterte stood alongside his daughter, Sara, whom he fathered with Elizabeth Abellana Zimmerman, his Jewish first wife, which by religious tradition makes Sara Jewish too.

In a solemn ceremony, he kindled the eternal flame in the Hall of Remembrance and laid a wreath.

Reading from what he wrote in the visitors’ book after the ceremony, Duterte said: “Never again.”

“May the world learn the lesson of this horrific and benighted period of human history. May the hearts of peoples around the world remain ever open. And may the minds of all men and women learn to work together towards providing a safe haven for all who are being persecuted.”

In 2016, in a reference to an opponent’s remark that his rise could be like that of Adolf Hitler, Duterte said he himself would be “happy to slaughter” drug addicts in a similar way to the Nazi leader’s mass murder of Jews.

Duterte is paying an official four-day visit to Israel, the first by a Philippines president, and officials on both sides have tried to play down his record of jarring invective.

Israel’s Government Press Office said most of the visit would be closed to the media, an apparent precaution against any faux pas by a president whose two-fisted crime-fighting tactics and rhetoric have raised hackles at home and abroad.

Duterte has apologized for likening his war on drug dealers with the Holocaust but he has been dogged by accusations from activists that thousands of killings in his ongoing war on drugs were executions, accusations he rejects. He has also been rebuked by women’s groups for remarks that make light of rape.

In June, Duterte called God “stupid” and he has lashed out repeatedly at the Catholic church, calling it hypocritical. His visit will include sightseeing in Jerusalem’s walled Old City, which houses major Christian, Jewish and Muslim shrines.

Duterte met with hundreds of Filipinos living in the country who work mainly as care-givers and received a rousing reception, Israeli media said. Between 24,000 and 28,000 work as carers for the elderly.

Netanyahu, in his remarks, said his own father had been looked after by a Filipina care-giver and that after he died at age 102, his uncle had benefitted from the care of the same worker.

“I, like many, many Israeli families, am deeply moved by this show of humanity,” Netanyahu said.