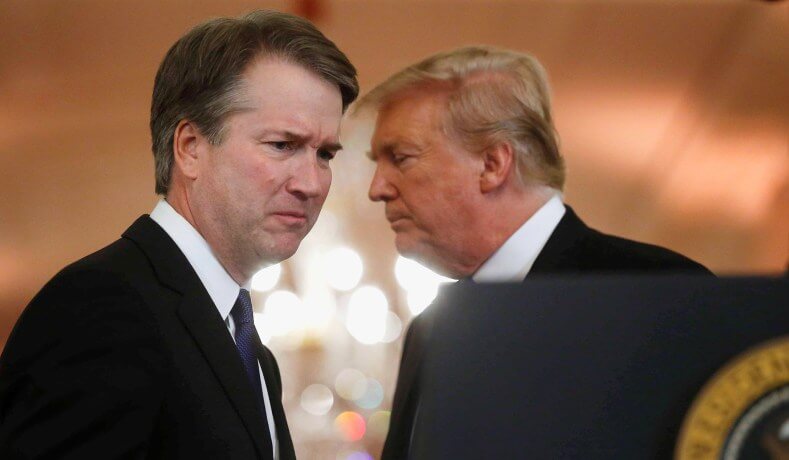 President Trump on Wednesday mounted a fierce defense of Brett Kavanaugh during a rare solo news conference where he forcefully denied the sexual misconduct accusations against his embattled Supreme Court nominee.

Trump called Kavanaugh “one of the highest quality people I’ve ever met” and reiterated his belief the three women who have come forward against the judge are making “false accusations.”

But multiple times throughout the combative news conference, the president refused to state directly whether he thinks the women are lying, saying he could “always be convinced.”

“I can’t tell you whether or not they’re liars until I hear them,” Trump told reporters in New York, where he was attending the United Nations General Assembly. “It’s possible they could be convincing.”

Trump lashed out repeatedly at Democrats, calling the women’s allegations part of “a big, fat con job” being played by the party to prevent him from putting a conservative judge on the Supreme Court.

“These are all false to me,” he said of the accusations.

Minutes later, however, Trump said he will wait to “see what happens tomorrow” before rendering a final judgment.

Trump’s staged the 81-minute session with reporters one day before Kavanaugh is set to testify before the Senate Judiciary Committee in a hearing that could make or break his chances of being confirmed to the high court.

Despite his attacks, Trump said if the testimony against Kavanaugh from his first accuser, Christine Blasey Ford, convinced him that Kavanaugh did commit misconduct, he would withdraw his nomination.

“If I thought he was guilty of something like this, yeah, sure,” Trump said.

It is the first time Trump has publicly raised the possibility of pulling Kavanaugh from consideration and is likely a sign that he is unsatisfied with the judge’s efforts to defend himself from the charges.

But the overall message from Trump on Wednesday was that there was little reason to believe the women accusing Kavanaugh of sexual misdeeds.

The president said his attitude is rooted in his own experience of facing similar accusations, which he said are all false. Nineteen women have claimed that Trump had extramarital affairs with them or accused him of sexual misconduct.

“I’ve had a lot of false charges made against me,” Trump said. “People want fame, they want money, they want whatever. So when I see it, I view it differently than someone sitting at home watching television.”

Asked what message those kind of comments send to young men in America, Trump lamented the how sexual misconduct allegations can harm men’s lives.

“In this case, you’re guilty until proven innocent. I think that’s a very, very dangerous standard for our country,” he said.

Trump extended the free-wheeling press conference several times to take more questions and joked that he wanted to leave on a high note like the musician Elton John.

He also admitted that despite his persistent criticism of the “failing” The New York Times, “I still love the paper,” said world leaders at the U.N. “weren’t laughing at me,” and called on a Kurdish journalist by referring to him as “Mr. Kurd.”

Trump also announced he is leaning toward keeping Rod Rosenstein as deputy attorney general, a decision that would avoid a major crisis at the Justice Department related to the Russia investigation at the same time the massive controversy swirls around his Supreme Court nominee.

Several times during the news conference, Trump focused his ire at attorney Michael Avenatti, who is representing a woman accusing Kavanaugh of being present during her “gang rape” at a high school party in the 1980s.

The president dismissed those charges as “another beauty” and accused Avenatti of being disreputable.

“Bad reputation. Take a look at his past,” Trump said of the lawyer, who also represents adult-film actress Stormy Daniels in her lawsuits against the president.

Trump’s former personal lawyer, Michael Cohen, pleaded guilty to charges related to making a $130,000 payment to Daniels in the run up to the 2016 election, which was allegedly a payment to keep her quiet about her claims that she had an affair with Trump.

Avenatti responded moments later on Twitter, calling Trump a “moron” and challenging him to a debate.

“Trump is a moron. He knows nothing about me or my client. He is trying to divert attention away from Julie as a smokescreen. I challenge him to debate me regarding Kavanaugh and his accusers and our respective backgrounds. He will never agree because he is a coward and weak,” the attorney wrote.