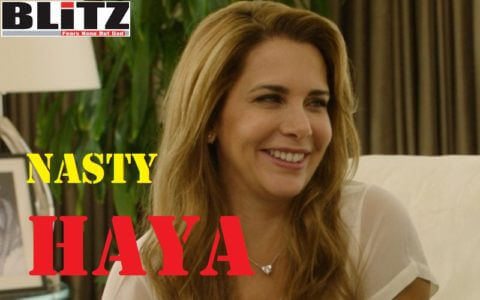 In May, Princess Haya Bint Al Hussein was caught red-handed by Prime Minister of UAE Sheikh Mohammed bin Rashid Al Maktoum when he suddenly visited their London home and found Princess Haya and her lover-cum-bodyguard. The Dubai ruler also found strips of used condoms beside Haya’s bed as well as two glasses, proving the romantic couple were having sex in the bedroom while their children were in the next room.

Sheikh Mohammed bin Rashid Al Maktoum was already suspecting his wife Princess Haya had inappropriate relations and the suspicion was proved as the couple were found to having sex. The Dubai ruler unexpectedly returned to London from attending a joint wedding of three sons in Dubai in May.

According to sources, he was shocked seeing the 45-year-old Princess Haya with the bodyguard at the lavish residence and demanded her immediate return to Dubai with him. But the Princess refused and abruptly left the house with her two children and flew to Germany.

The Dubai ruler and members of the royal family already were worried at the odd intimacy between Princess Haya and the former army officer who provided security. This bodyguard was accompanying Princess Haya of her trips worldwide.

The bodyguard worked for UK Mission Enterprise Limited who provided round the clock security for the Sheikh and his family. This company is owned by the Dubai government. Most of the members of this company are ex British army officers.

It is learnt that the UAE royal family onwards would not provide male bodyguards to the female members of the family.

It is learnt from dependable sources that Princess Haya was conspiring with her bodyguard-turned-lover for months about escaping from the royal family and marry secretly. They had planned to marry in Monaco. It is also learnt that the bodyguard was telling imaginary stories about murder of Sheikha Latifa and her sister Shamsa.

British bodyguards of the royal family are spying

Princess Haya’s British bodyguard was employed by UK Mission Enterprise Limited, a London-based security company owned by the Dubai government, which is based in London and has a turnover of £5million, according to the latest accounts filed at Companies’ House. Abdulla Shakeri is the Managing Director of this company.

Another source said, the Jordanian Princess, who also is the sixth junior wife of Prime Minister of UAE Sheikh Mohammed bin Rashid Al Maktoum was already enjoying extreme liberty during her student life in Britain and was having many ‘friends for benefit’. She also had earlier drove few of her male bodyguards into physical relations.

Princess Haya accompanied by her boyfriend is hiding out at her £85 million Green Palace mansion near Kensington Palace in west London. She bought this property in Kensington for £85 million from Indian billionaire Lakshmi Mittal in 2017.

According to sources in the Middle East, Sheikh Mohammed bin Rashid al-Maktoum, 69, had become increasingly disturbed by his wife’s closeness to her bodyguard. The princess, a half-sister of King Abdullah of Jordan, reportedly used to steal money from the Dubai ruler to give her bodyguard lavish gifts. She had also bought a luxurious apartment for her bodyguard in London.